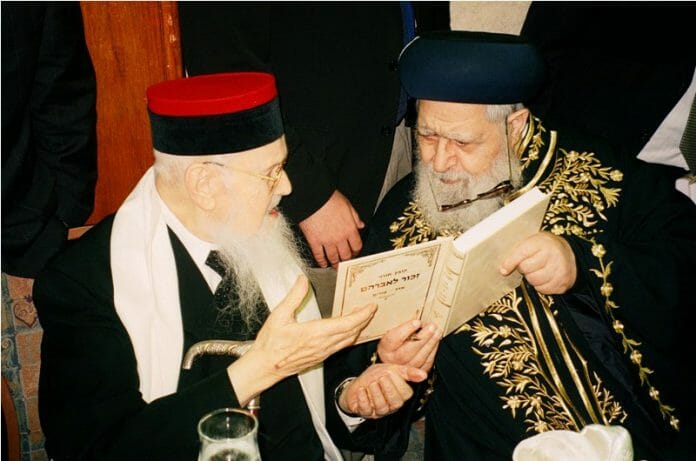 Rav Yosef Palvani author of sfarim Hemdas Yosef, Darchei Ayun is a very big Talmid Chacham, and posek. He knew Rav Berland from the time he came to Jerusalem from Bnei Brak.

Rav Palvani was very close to Rabbi Abba Shaul, and Rav Ovadia Yosef. [He’s first thanking the interviewer for setting up the hotline, that’s enabling people to challenge the insults to Rav Berland.]

“I had the zchut to know the Rav for the last 40 years, from the time he left Bnei Brak to Jerusalem 40 years’ ago. I saw his greatness, and his amazing separation from materialistic things. ‘Who can even speak his praises?’

”It says in the Torah: “the king is locked in chains”. The Tzaddikim are suffering because of the sins of the generation (from the Gemara Yerushalmi). The only reason Jerusalem was destroyed was because they didn’t protest the treatment (insults) against the Talmid chachamim (from the Gemara Yoma).

“Who doesn’t know the greatness of Rav Berland in limmud Torah? Every single part of the Torah was clearly in his hands. Whenever someone had a conversation with him, or would mention something about the Shas, Yerushalmi, or any holy sefer, and they’d quote something, he’d complete the quotation as though the book was open in front of him. And his shmirat enayim, guarding his eyes – no-one can compare to him!

“In Avodat Hashem, he would go to fields and deserts for three days straight to do hitbodedut, he would stand in one place for 12 hours praying the amida, standing there without moving. If we spoke about all the things we know about him, about all of his greatness, we’d use up all the time.

“We don’t need proof of his greatness. His greatness is known to anyone who had any connection to him.”

[Rav Palvani then thanks the interviewer again,  Reb Yaacov, for starting the Shuvu Banim hotline, and preventing a lot of the bad decrees happening to Am Yisrael by going against the insults and defamation of Talmid Chachamim.]

“I was very close to Rabbi Abba Shaul, and Rav Ovadia Yosef in their lifetimes, and I was amazed by their amazing greatness. But by any of them, we didn’t see the avodat Hashem that we see by Rav Berland. The kedusha, the shmirat enayim, the tefilla, and the gemilat chassidim (kindnesses) he used to do for people – I know many stories of what he used to do for others.

“He would give money out non-stop. If anyone asked for money, he would immediately give it to him whatever he has, without even checking. The pidyonot he used to give – I saw him give away all of his money, he sold his apartment in Bnei Brak, he sold everything in order to give a pidyon, money to charity. Reb Yaacov, do you know about this?

[Interviewer: yes, his son was very ill and he sold his house to raise money for a pidyon Nefesh.]

“He’s an angel of God! In everything that he would do. I was raised by all of the great leaders of the past generation, and I saw amazing things, including people who had Ruach Hakodesh. But I never saw things like this. They all had ruach hakodesh and they were great Tzaddikim, but not like this, that they would know things like this. He would open a book and immediately know what it was talking about. He would know what was going on with people when he was talking to them.

“He would hardly sleep, maybe just an hour or two hours a day. Oy va voy, for anyone who talks against the Rav! Hashem should have mercy on them!

“I know a lot of stories about people who spoke badly about other Jews, and they ended up being sent very hard things and punishments from Shemayim as a result – problems with children, terrible illnesses etc. Hashem should have mercy on the people who are speaking badly about the Rav.

“It’s not the way of the Torah to do this. Even when the Tzaddikim had arguments with each other, and disagreed with each other violently, they never spoke badly about the other person. I remember even when Rabbi Abba Shaul disagreed with Rav Ovadia about certain things, he always spoke only with respect. Things weren’t taken to the extreme people are taking them to today, Hashem should have mercy on these people, that they shouldn’t get the terrible punishments that are in store for them.

“Who can dare to say something against this person, that no-one can even come close to him! And the amazing people he brought close to Judaism, and the tens of thousands of people he inspired to make Teshuva, and the amazing synagogues and yeshivot that he built? Who can dare say something against him? The Gemara says that you even have to respect the stones of your wall, and be grateful to them for the good they are doing you. Certainly, when it comes to the Rav, to the Tzaddikim, we need to have respect for them. He’s the Gadol HaDor! (the Tzaddik of the generation).

“Who knows, chas v’shalom, what could happen? The people who are talking against the Rav, if they don’t care about their own lives, they should care about their kids and the family’s lives. Who knows what’s going to happen to them?! People got terrible diseases form speaking badly about other Jews!

[Interviewer: People should know that the only reason that this isn’t happening right now is because the Rav himself is praying for them, and blessing them.]

“Someone came into [the secular] court, and was saying a lot of insults against the Rav, so they asked the Rav to respond, and the Rav said: ‘I just want to give him a kiss on his forehead.’ Who else would say something like that?! When the Rav was being interrogated by the Police a few weeks’ ago, they brought in someone who said the most terrible, disgusting things against the Rav in front of him. As he was leaving, the Rav thanked this person for coming.

“When we hear a story like this, how can we not cry?”

“How can anyone say anything bad against him? What can we say about him? This person put [the Rav] in the most terrible torture and pain, caused him to be in disgusting prisons in Africa, the worst places in the world, caused him so much suffering and pain – and after all this to come and give him a kiss on his forehead?! This is not a person! This is an angel of God!

“The Gemara (Yerushalmi) says that the degree of the tzaddik’s suffering indicates the degree of his greatness afterwards. The more he suffers, the higher he’ll go. It’s like a bow being pulled back – the further it’s pulled back, the higher the arrow will fly when it’s released.

“The Rav is suffering for our sins. We should be zoche this year to see the full redemption, Amen.”