In light of the corrupt conduct of the Israeli justice system against our Rebbe, Rav Eliezer Berland shlit”a…despite his precarious state of health which is only worsening, the conduct towards him has only turned more cruel and illogical:  an elderly Jew almost 84 years old, rushed to medical care and lengthy life-saving surgeries and almost immediately afterwards returned to prison in a stretcher; and this despite the fact that Rav Berland is currently the oldest prisoner in the entire prison system held without a conviction.  What’s more, no trial has begun against him, and he remains imprisoned until the end of the judicial process – at the moment, already more than nine months.

The Rav’s talmidim, Chasidim, and many supporters are always organizing special prayer gatherings, along with the reciting of 7 Tikkun Clalli’s every day.  Nonetheless, the Rav’s state of health has turned into a case of real danger to life.  Therefore, the Rabbinic Council of “Shuvu Banim” has gathered and made the decision to go out and protest.

Every day, Kollel students go out to various points in Israel and stand with protest signs in front of a public which is drawn to the truth that the general media doesn’t tell.  These are the words of the Mekubal Rav Shlomo Elmaliach shlit”a, author of the highly acclaimed Ateres Shlomo commentary on the Etz Chaim, in a call to all Kollel students of “Shuvu Banim,” talmidim of the Rav, his supporters, along with anyone who has a Jewish heart – to come and protest.

“We are standing in the street to protest and there is great interest from the public.  Many people stop and photograph.  As could be expected, the police arrived to attempt to remove us, but they have absolutely no reason to do this.  We are behaving appropriately.

“In the meantime, we are receiving a lot of very good feedback

“At 1:45 pm, we gather at the prayer hall on Ido HaNavi St. in Jerusalem.  From there, we go out together on the path of protest – this mamash awakens reverberations in the world.

“Know, that he who joins in protest with have the merit and a part in the release of our Rebbe Rabbi Eliezer Berland shlit”a.”

This message from Rabbi Elmaliach follows the message of the Lelover Rebbe from Boro Park shlit”a Rebbe Dovid Biderman to the members of Shuvu Banim community to follow to path of Yaakov Avinu; Prayer, gifts, and war. To first begin with prayer, then try to help Rav Berland by working with the system, if that doesn’t work then we must go demonstrate. To view the letter click here.

Listen to Rav Elmaliach speak in the video below:

Pictures from the protests against the illegal incarceration of our Rebbe Rav Eliezer Berland shlit”a: 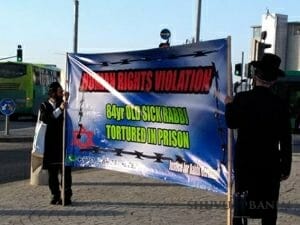 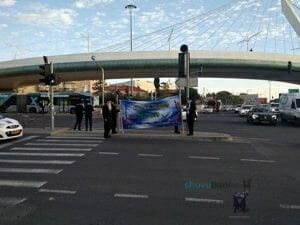 To donate to the Emergency Rescue Fund for Rabbi Eliezer Berland shlit”a:

Article by Aharon Shwartz: Who is a Pious Fool? Anyone who Doesn’t Immediately Protest!