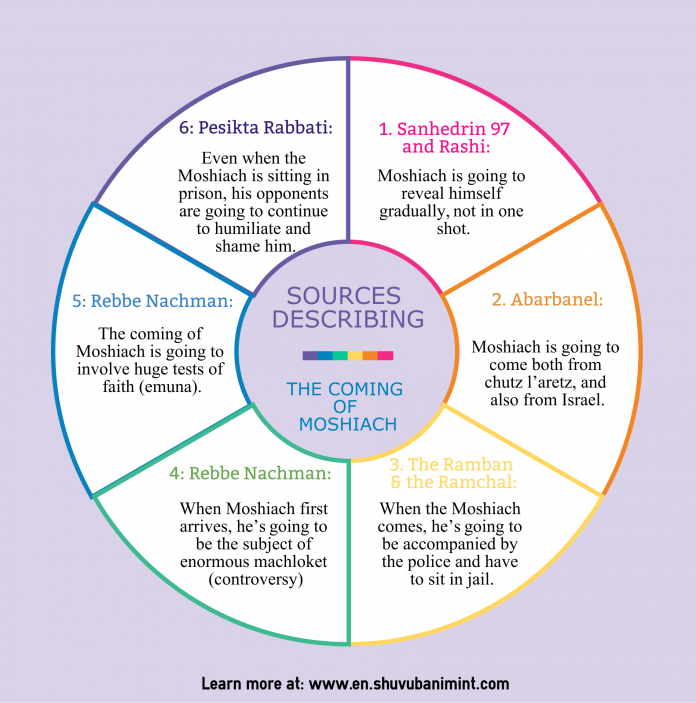 Stunning testimony from R’ Rachamim Bracha, a longstanding student of Rabbi Berland, in conversation with Rabbi Lugassi, head of the Kaf HaChaim yeshiva.

Here are his words, translated from the original Hebrew, which you can hear for yourself, HERE.

“I learned in Yeshiva ‘Kaf HaChaim’ around 30 years ago,” begins R’ Bracha. “[Recently] I met Rabbi Lugassi and I asked him: ‘Did you know that Moshiach is going to sit in prison?’

Rabbi Lugassi: Are you referring to Rav Berland?

I replied: I knew that there was a midrash called the ‘Pirkei Hechalot’ that said that Moshiach will sit in prison.

Rabbi Lugassi: I’m not saying whether Rav Berland is Moshiach, but it certainly hurts me that he is in jail, a Jew of his advanced age. Let me tell you something about Moshiach that I heard from Rav Berland himself, in the year 5775. Rav Berland said in a shiur:

Rav Lugassi then told me, “Indeed, I’m not a chassid [of Rav Berland] like you are, but this, I heard from Rav Berland.”

I then asked: “Could it be, that all this that is happening with the Corona now is accelerating us towards Moshiach [appearing] in 5781?

Rabbi Lugassi: It’s certain that this is the process of geula.

Whatever was, that is what will be. That as much as they opposed Moshe, all he did was pray for them.

The opposite: The more Datan and Abiram embittered his life, he still split the sea for them. And also, by Rav Berland – Abba Tortsky asked Rabbi Berland to put out a recording against those who are insulting him, and who instigated the Beit Din against him, so they would become scared of the punishment, to scare them off.

How can people not be scared, to persecute the Tzaddik?

‘I don’t want to put out a recording. I forgive them, and I pray for them, that it should only be good for them.’

Natan Salmonovitch, the son of the kabbalist Rabbi Yaakov Moshe Salmanovitch from Bnei Brak, said: “the Pirchei Heichalot Midrash that talks about Moshiach should be publicized. When people read what is written there, they will automatically say that it’s similar to what is happening to Rav Berland.

So, we just need to publicise these verses of the Heichalot, and everyone will be amazed about how much it resembles what is happening to Rav Berland.”

R’ Bracha continues: “So I did an experiment. Next to me there lives a number of avreichim from the Ponovezh yeshiva. I asked one of them, if I would tell you that Moshiach will sit in jail, and that they will say about him that he’s engaged in immorality, and a thief, and a murderer etc, would you say that I’m crazy?

The avreich from Ponovezh replied: “Of course! What sort of things are these to say, about Moshiach?!”

I said to him: “Tzaddik, you are learning Gemara all day long, and you still don’t know that there are ancient midrashim that speak exactly about these things, that will be said about the Moshiach; that he will be insulted, and that they will put him in prison.

People don’t understand, that everything that is currently happening with Rav Berland was already written about, and this isn’t just the words of some foolish student or chassid.

In the Midrash Pirkei Hachalot it’s written that Am Yisrael will say about the Moshiach:

“At that time, Israel will return to a different daat (spiritual knowledge / religion), and will insult the Moshiach, saying: Woe to us, that we went astray after this meshuggeh (crazy person)!

HaKadosh Baruch Hu will say to them: You’re calling him a crazy person?! Now you are going to see his light, which will light up his surroundings, as its said (Tehillim 50:3), and around him, his surroundings are exceedingly turbulent.

And all those who believed in him from the beginning, will not be erased from the book of life (Pirkei Heichalot, 35).”

(You can read more of the translation of that midrash HERE)

It’s hard to understand how the words of this midrash are mamash occurring, how Am Yisrael is whipping up this sin, until they abandon the Moshiach and gossip about him.

In some of his recent shiurim, before his current galut, Rav Berland said about himself:

Once in 200 years, a soul comes down the world that has never sinned.

Rav Berland took a pencil, and underlined these words in the sefer of the Rambam. He then responded to one of the people who was asking him questions about this that:

“From the age of 3, I didn’t even have a fleeing thought to do a sin.”