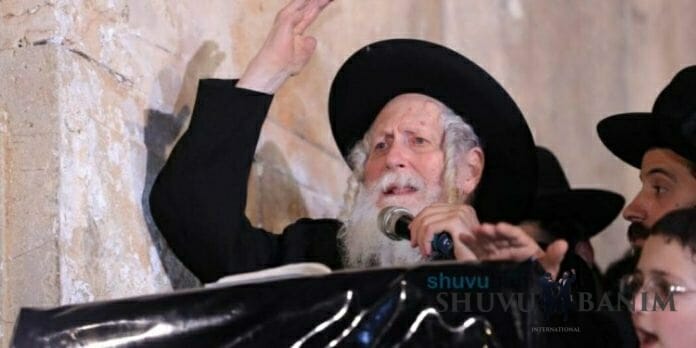 Below is the complete shiur which our Rebbe Rav Eliezer Berland shlit”a gave over after the recital of 7 Tikkun HaKlalis at the prayer gathering last Thursday night – Erev Rosh Chodesh Elul in the city of the patriarchs, Hevron:

Then this gathering is preparation for the giving of the Torah.  Now Moshe ascends to Mount Sinai to receive the second Tablets.  Now we are already receiving the third Tablets – the Ten Commandments.  Therefore, Avraham, Yitzchak, and Yaakov, Moshe, Aharon, Yosef, David, and Sarah, Rivkah, Rachel, and Leah, who are found here near to us, behind this wall Sarah, Rivka, and Leah, are found – everything together is the numeral value of “I am Hashem your G-d” (Shemot 20:2) – all Seven Shepherds, with the four matriarchs, this is exactly the number.  “I am Hashem your G-d Who brought you out of the land of Egypt, the house of bondage” = 2495.

Then Barneiya – Kadesh Barneiya is the secret, that they already needed to enter the Land of Israel – “Come and inherit” (Devarim 1:8).  Now we are in the Land of Israel mamash.  The verse “come and inherit” has been fulfilled.  One doesn’t need any weapon, doesn’t need the army, doesn’t need anything!  The moment that we go with the Tikkun HaKlali, then we conquer – “and the toil of nations they inherited” (Tehilim 15:44) — we conquer the whole world!!  And this year, may we merit to a complete redemption, speedily in our days, Amen!

Who is the Only One who Can Conquer All Jerusalem?  The Daily Chizzuk with Rabbi Eliezer Berland Shlit”a

“All the Jewish People Need to Be There!” – The Complete Statement of R’ Berland Shlit”a about Prayer Rally in Hevron