Since Rav Eliezer Berland, shlita, was released to his home by the State authorities, almost every single day he’s been praying with the community at the Beit HaRav, a small hall at the base of his apartment block which opens out into a communal courtyard space on Ido HaNavi.

With the approach of the winter months last year, it was decided – with the agreement of the local residents in the road, 99% of whom are actually devoted followers of the Rav and who come to pray with his minyan each day – to erect a huge marquee in the courtyard to provide shelter from the weather, for the hundreds of people, including women and children, who regularly come to pray at the Beit HaRav.

The Rav’s persecutors in Bet Shemesh – the same people who have been behind the malicious falsehoods right from the beginning – have been continuing to look for new avenues to try to damage the Rav and his followers, so they made a complaint to Jerusalem City Hall about the marquee.

Yesterday, June 18, 2018, workers from the City Hall arrived on the site in the morning, and immediately started dismantling the marquee. 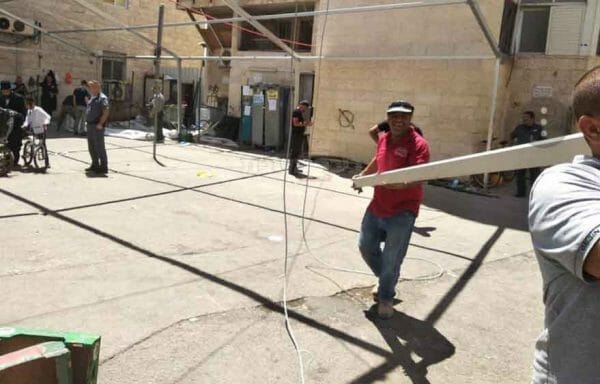 But the prayer services will continue. The people will continue to gather together with the Tzaddik to pray for the well-being of the nation of Israel and to bring the geula (redemption) speedily, and in the sweetest of ways. And sooner or later, truth and justice will prevail, and all of Am Yisrael will make teshuva.