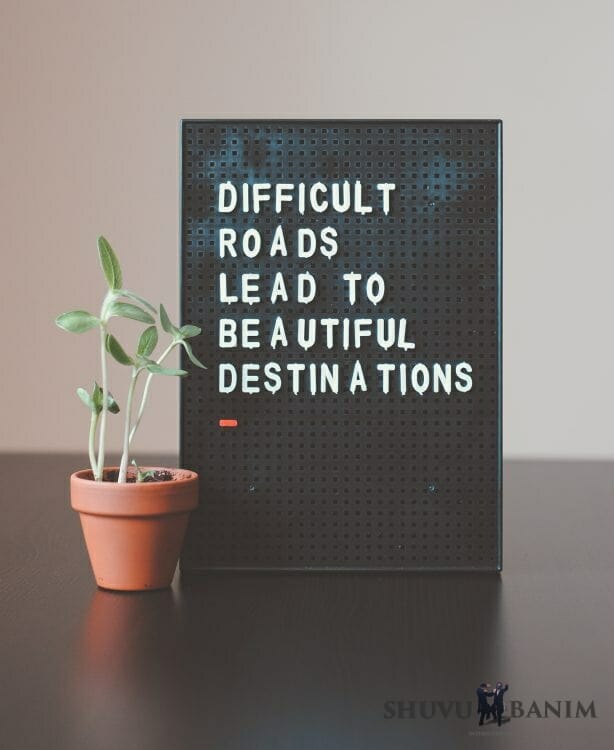 As I wrote about a couple of weeks ago HERE, finding motivation to do anything much has been pretty difficult the last few months.

From my own experience, the more I’ve been trying to work on my own bad middot, the less motivation I seem to have. It’s truly amazing how much of the stuff I wanted to do was based on getting back at someone, or making a name for myself, or venting some anger, or trying to get ahead, in some way.

For as long as I was buying my yetzer hara’s line that the only true measure of success was owning my own, big house, or selling millions of books, or having four million Facebook followers, I had motivation in spades to keep writing, and to keep doing, and to keep trying.

But once I really started to internalize that there is so much more to life than the externals, and trying to get a grip on things like my own jealousy, my own arrogance, my own anger – well, my motivation to ‘do’ kind of shriveled up and died.

Is it going to come back?

Things are about to change

But in the meantime, the Rav recently put out an awesome shiur (which you can read HERE) where he explained that when Moshiach comes, the yetzer hara is going to change radically.

The Rav explained that so much of what is motivating humanity right now is our animalistic nature, i.e. our bad middot. We desire money…we desire food…we desire influence and power… and that’s really what’s motivating us to get out of bed in the morning.

When Moshiach comes, that animalistic side to us is going to start to be tamed, which means our yetzers are going to change radically. When you live in a world where all the food you need, and your clothing, is growing on the trees (just like it used to back in Native American times…), then motivating yourself with a bar of pareve chocolate truffle delight probably just won’t cut it, in quite the same way.

What really happens, when Moshiach shows up?

The materialistic world is going to fall out of focus drastically when Moshiach comes. All the things that so many of us waste so much of our time now, like stockmarkets, and property prices, and partisan politics, and ‘man-made climate change’ (sic) are going to disappear.

The Rav said in that shiur that parnassa won’t be a problem anymore. The bread will be growing on trees, the milk will be coming from the family goat. (If requests are possible, at this stage, can I please ask to be located in the part of town where the trees with designer label long skirts will be growing?)

This is not the Rav’s own words – it’s all in the Gemara.

A time of ‘no choice’

The Rav explained that at that stage of the redemption process, the yetzer will focus all of its efforts into making it super-hard to learn Torah, or to work on the inner dimension of our bad middot.

Because we’ll have to be doing all that stuff lishma, and not for ego gratification or material advantage.

Only crazy people are going to still have obvious bad middot

You learn Torah, you don’t learn Torah, you’re still going to be drinking the same goat milk as your neighbor. The fear of Hashem will be so palpable at that stage, that only a literally crazy person would actually act on their bad middot.

There won’t be any swindling businessmen, no more violent mafiosos, no more drug dealers, bent politicians or corrupt public figures. (I know! How boring! What on earth will all the gossip mavens do for entertainment?)

But what there will be, still, is a ton of inner work to be done, on those ‘hidden’ bad middot that we all like to think we don’t have.

“What, Rivka, now you’re jealous of the neighbor’s goat milk?!? Are you for real?!”

“Why are you angry that you don’t have a new dress for Shabbat? Just go out in the garden and take one off the ‘Ralph Lauren Tznius Clothing’ tree!”

“Why are you complaining again, and feeling dissatisfied? Isn’t plentiful parnassa, peace, good health and Moshiach enough to make anyone happy?!”

And then, we’ll have to go away and really start to look at what’s really going on, under the surface, that right now is dressed up in a million-and-one justifications and excuses.

And that’s hard work, man, is that hard work.

But this is the stage of the geula process that we seem to be moving in to now for better and for worse.

So, now I know why I lost so much of my motivation: I was being prompted by a ton of bad middot, which are thankfully, starting to recede a little.

But that doesn’t mean the challenge is over, far from it.

If you look around the world right now, if you read the latest shiurim of the Rav you realise

The real challenge is only now about to begin.