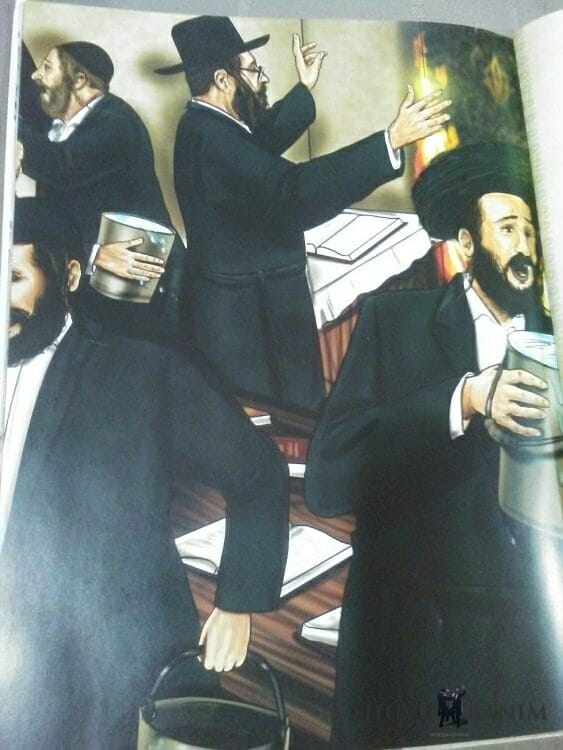 When the Rav was younger and beginning to become closer to Breslov chassidim, the Rav was living in Bnei Brak. This is when the flame of chassidism began to flare in his heart.

The next story happened on leil Shabbat when the Rav arrived at the building of the Breslov yeshiva. This was before they finished building the big beit midrash, so studying and prayer happened in a room on the same level as the entrance of the building. The Rav was a young avreich at the time, and he sought to get closer to Hashem and to cling with all his strength to Hashem’s work and to the fire of chassidut. He would stand next to the Aron Hakodesh while praying.

It was during tefillat Shemoneh Esrei that something happened. One of the Shabbat candles next to the Aron Hakodesh fell over and rolled around on the floor. The candle flame ended up next to the curtain of the Parochet. And in a few minutes the flames started to spread all around the beis midrash.

The people praying became frightened. Some people rushed to escape the room, and some came back with a bucket of water in order to put out the fire.

Only one person remained and had not moved from his place. It was the avreich, the young Rav Eliezer Berland. The Rav continued in prayer with all his strength, like nothing was happening around him. The big fright, the big noise, people running to escape, and working to put out the fire. All of this did not cause the young Rav to move even one muscle on his face.

His hands were open at his sides, his lips were mumbling in prayer, and his eyes were closed. This testified like a thousand people testifying for his lofty soul. He did not feel a thing of what was happening around him.

And Heaven showed that his actions were wanted and his lofty soul well deserved chassidism. When the fire was reduced, the people who were praying were surprised to discover that a ring of flame was next to the Rav but it did not hurt him. Like it says: “Shomer Hashem et kol ohavav.” “Hashem watches over all of his loved ones.”

Eerie: Extinguish on Friday the Fire that Will be Saturday Night — Rav Berland Shlit”a