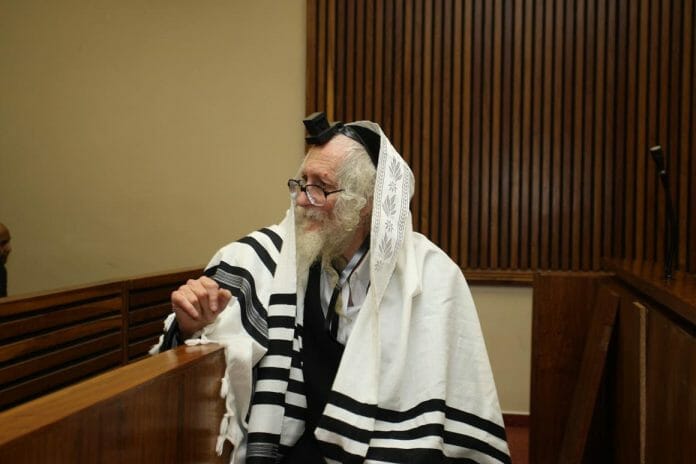 ”We regarded him stricken by God and afflicted, but it is the Nations sins which he bore – through his wounds we are healed”

Before that meeting with the yeshiva student, maybe it would have been possible to have just stayed quiet about what we knew of the Tzaddik Rav Eliezer Berland. After all, we knew that he was an extremely holy individual, and on an extremely high spiritual level – but we never felt the need to share that information with the world.

The avreich was studying in one of the more famous litvishe yeshivas in Jerusalem. He came over, and asked us: ‘Tell me, what’s going on with Rav Berland?’ At first, we thought to try and avoid the whole discussion, because it’s not in our power to fix the world. But then, we suddenly remembered what Rebbe Nachman of Breslev wrote in Likutey Moharan, 2: 78:

Then, we also remembered what the prophet Yeshaya prophesized regarding what would happen to the messenger of Hashem on the eve of geula (redemption). So, we began to answer the avreich with the following verses (Yeshaya 52-53):

“Behold, my servant will succeed. He will become exalted, high and exceedingly lofty. Just as the multitudes were astonished over you [saying] ‘his appearance is too marred to be a man’s, and his visage to be human’ – so will the many nations exclaim about him, and kings will shut their mouths [in amazement]. For they will see that which had never been told to them, and perceive things they had never heard.

“Who would believe what we have heard!? For whom has the arm of Hashem been revealed? Formerly he grew like a sapling, or like a root from arid ground. He had neither form nor grandeur, we saw him but without such a visage that we could desire him. He was despised and isolated from men, a man of pains and accustomed to illness, as one from whom we would hide our faces. He was despised and we had no regard for him. But in truth, it was our ills that he bore, and our pains that he carried. But we had regarded him diseased, stricken by God and afflicted. He was pained because of our rebellious sins and oppressed through our iniquities. The chastisement upon him was for our benefit, and through his wounds we are healed.

“We have strayed like sheep, each of us turning his own way, and Hashem inflicted upon him the iniquity of us all. He was persecuted and afflicted, but he did not open his mouth, like a sheep being led to the slaughter, or an ewe that is silent before her shearers. He did not open his mouth. He has been taken to captivity and judgment, who could have imagined such a generation? For he had been exiled from the land of the living, from my Nation’s sins which he bore.”

Commenting on this passage, the Radak, explains that not only that the messenger of Hashem isn’t favored by the generation, but rather, he’s even disgraced in our eyes. He’ll be ‘despised and isolated from men’ because other people won’t want anything to do with him, and will be disgusted by him, and will consider him as being nothing. He’ll be ‘a man of suffering who is accustomed to sickness’, the Radak explains that his suffering is the pain and the sickness of being in galut (exile), and he will be known for and accustomed to bearing the yoke of galut (exile).

But the Radak continues, and explains that the Jewish people will believe that this holy messenger is in exile because of his own sins, that he is punished and afflicted by G-d – but actually, the Navi tells us that it’s our sins that are to blame, not his. The suffering that should have been directed at us, all of it is now being directed at him, which he bears willingly, as an atonement for our sins. All of us strayed like sheep from the path of G-d, sheep without a shepherd. And he was imprisoned in galut, taken to captivity and brought to judgment.

The words of the prophet are difficult to understand, and it’s useful to read them yourself. But the more difficult thing to understand is how it’s specifically the person who’s being sent to redeem Israel is experiencing all this suffering. And worse, that so many people don’t even realize that he’s the messenger from Hashem who’s been sent to redeem them, and instead would be very happy if he was ‘brought to judgment’.

To such an extent does the redeemer bear the yolk of the sins of the people that the Midrash in Yalkut Shimoni Yeshayahu, Ch. 60, expounds the verse referring to the redeemer: ‘The son who is dear to me, Ephraim, etc, mercy, I will have mercy’. Why does it mention the word ‘mercy’ twice? The answer is, that the first mercy is talking about the time when he is detained in prison, that every day they would gnash their teeth at him, and indicate with their eyes, and gesture with their heads and mutter their lips. The second ‘mercy’ refers to the time when he is released from prison, that not only one or two kingdoms come against him, rather 140 kingdoms surround him and Hashem says to him “Do not fear them…”’

The midrash explains in Chapter 52 that at the time of creation, G-d divided all the suffering that will be brought to the world throughout all of history into 3 parts: One part was divided between the patriarchs, one was given to the generation of destruction (like the holocaust), and one was given to Moshiach himself.

Why does Moshiach suffer so much? Because of his great love for Am Yisrael he agrees to sacrifice himself for the sake of bringing redemption. In Chapter 60 the Midrash relates, “God asks Moshiach: ‘Those who are burying with you their sins – in the future, they will make you like a calf (with an iron yoke on it), with dimmed eyes and subdued spirit. Because of their sins, your mouth will stick to your palette [from suffering]. Do you want all this?’ Moshiach says to God, ‘Master of the world, with great joy and a jubilant heart I accept all this on myself as long as not one Jewish soul will be left out [at the time of redemption]’.”