MOSHE[1] RABEINU – THE SOUL BEFORE THE CREATION OF THE WORLD

(A Torah said over by Rav Berland Shlit”a[2])

As it is written[8], “That Hashem (G-d) redeemed Yaakov,” and the word “redeemed” (in Hebrew: פדה) consists on an acronym of the last letters of the names Yosef, David, and Moshe. Like this;

Yet once Batya, the daughter of Pharaoh, opened the ark she saw, she found, she revealed the holy Divine presence[10] of Hashem (G-d).  Batya had emunah (faith-belief) that within this ark was the Divine presence itself, as described[11], “And [the Divine presence] will rise before the light of day.”

The Midrash HaGadol says that every night Batya went out to look for Moshe for three months continually at the most obscure times.  She would search during the morning and at night, and again in the morning and then during the evening.  And through this constant search, Batya merited to find Hashem (G-d), and therefore Batya called the boy she found “Moshe” since this is an eternal name. Because the Hebrew letters which make up the name Moshe are the same Hebrew letters arranged in a different order which make up the name Hashem (G-d), like this; 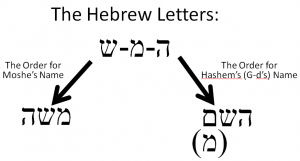 And in this merit Batya entered the Garden of Eden[12] with her body.  And everyone that will be awake on this night, the 7th of Adar, and also on the first and second nights of Adar, he will merit to enter the Garden of Eden with his body like Batya the daughter of Pharaoh.

A PRAYER[13] FOR THE HILULAH OF MOSHE RABEINU:  Ribono Shel Olam – Master of the Universe, you alone know the great kindness and mercy that is now upon us in this generation, on each, and every person in the Nation of Israel.  Everyone wants to live with fear of your great name and everyone desires and waits to connect to you in truth, but everyone knows the impurities in his heart.

Everyone is hoping and waiting for the true healer, a true leader that will connect us to Hashem and will heal the sicknesses and the pains in our soul.  There is no one that can heal us because you took from us all the true Tzadikim and true leaders and you hid your face from us.  Ribono Shel Olam – Master of the Universe give us the merit to connect to the true Tzadikim that merited the essence of Adam HaRishon (the Primordial Man) before the Sin, the Tzadikim that can find the good points in every single Jew in the entire Nation of Israel.

Rav Berland Shlit”a’s son, Rav Nachman Berland, was once a chosson (a groom) engaged to be married.  The Rav’s Shamash[14] at the time, Rav Michayel Gol wanted to help Rav Berland Shlit”a to raise money for Nachman Berland’s upcoming wedding.  Rav Gol decided to start his fundraising efforts in Bene Brak since the Rav had lived there many years, and had a good reputation there since the Rav had been the Steipler’s[15] learning partner in Shulchan Aruch (Jewish Law).

Rav Gol set out on his journey from Jerusalem to Bene Brak and planned to go from shul[16] to shul asking for donations for the Rav’s son’s wedding.  Rav Gol arrived in Bene Brak and began at the Breslov Shul of Bene Brak since the Rav had spent the last few years in Bene Brak primarily there and Rav Gol assumed they would be happy to help.

The whole trip back Rav Gol felt like his Breslov brothers of Bene Brak had sold the Rav out and when he returned to Jerusalem, he speedily ran to the Rav’s home on Chomah Shleeshees (where the Rabbaneat still lives today) to tell him what had happened.  When Rav Gol entered the Rav’s apartment he first gave the Rav all the donations he had collected, and the Rav was appreciative.  Rav Gol made sure to point out to the Rav that from the Chazon Ish Kollel there was a gift of 2,000 shekels, yet the Rav was unmoved.

Then Rav Gol began to tell the Rav what had happened, how all the other shuls in Bene Brak received him cordially and were happy to help Rav Berland Shlit”a for his son’s upcoming wedding, yet at Breslov Bene Brak they barely gave Rav Gol anything.  The Rabbaneat was listening in the room and joined in Rav Gol’s upset, she too could not believe how the Breslov Chassidim of Bene Brak did not want to help her husband?!

THE MESSAGE: THE RAV’S LETTER FROM LAST WEEK

“There is an incredible merit that has fallen into the Shuvu Bonim Breslov community, which is that everyone is slandering them and embarrassing them.  This is a great merit since all the Tzadikim that were in this World would have paid good money and given all their belongings in order to merit all these embarrassments.  And all those that are not able to endure the embarrassment and the slander should leave the Shuvu Bonim Breslov community immediately…

Furthermore, he remains quiet because he loves Hashem (G-d), meaning he stays quiet because he feels that he has sinned against Hashem.  And he has intent while being embarrassed to stay quiet because this embarrassment will atone for all his transgressions and fix all his sins, instead of having intent to be quiet in order to cause harm to the people embarrassing him.

Therefore, by remaining quiet with the proper intent to atone for his transgressions, he removes from upon himself all the evil forces[19]  and impurity that cleaved to him since these evil forces can no longer cleave to him because of all the holiness that he now possesses after the embarrassment, and now he merits living in holiness and truth.”

Furthermore, the Rav[20] taught that when, “A person gets embarrassed, at that moment he receives a million dollars.”  So the 2,000 shekels Rav Gol collected from the Chazon Ish Kollel was nothing compared to the millions of dollars he received from the Breslov Chassidim of Bene Brak.  And to this day, the Rav continues teaching his students the same principle, just as he taught Rav Gol; “DON’T YOU SEE! At BRESLOV, you collected the MOST!  At BRESLOV, you collected the BEST,” because only in Breslov does one learn the truth that[21], “Not a single person in the World is able to reach any level of holiness except through controversy, embarrassment, and slander.”

Purim is a busy day with lots of Mitzvos.  Does a person have to learn Torah on the day of Purim?  From the Moed Lkol Chai[24] we learn, “On Purim there is an obligation to learn Torah, and the day of Purim should not passby only in seudahs (lavish dining) and parties.  Furthermore, someone that learns Torah on Purim has more merits since most people minimize their Torah learning on Purim.  Similarly, it is good to read Psalms (Tehilim) on Purim.”

A TORAH CLASS WITH RAV SUCCOT!!

[3] The word Rabeinu means “our master” or “our teacher.”

[4] The Rav taught, “the Ramban explains that the Heyouli is complete nothingness,” meaning, “after the Heyouli is the passage from the nothingness to the physical.”  Therefore, there are four foundational physical elements; earth, water, wind, and fire and then above them all is the Heyouli which corresponds to the inner most place of a person which is his will. (These quotes and explanations are from the booklet “Limud for the 7th of Adar” published in the year 5776 by Yeshivas Breslov Chochma Ve’Daas page 12 – 13 and the table printed there) (The concept of connecting the Heyouli to a person’s will is from the book Innerspace by Rav Aryeh Kaplan z”l page 17).

[6] The Rav taught, “the whole goal of the Heyouli is to go up higher until it reaches the level separated from the rest of the levels, until it reaches the world of Atzilus …and the Heyouli is complete and total nothingness which is the root of all creation and someone that knows and comprehends the root of all creation, he is able to fix the World and bring the redemption.” (The quotes and explanation are from the booklet “Limud for the 7th of Adar” published in the year 5776 by Yeshivas Breslov Chochma Ve’Daas page 12).  And Rebbe Nachman explains a person goes up level by level, “until he will come to Bereshis which is the point of creation from which begins Atzilus” (Likeutey Moharan part 1 Torah 22 subsection 10).  And Rabbi Kaplan writes, “The term Atzilut is derived from the root Atzel (אצל) meaning ‘nearness.’ This is because Atzilut, relative to all that follows it, is closest to and represents the most direct intimacy with the Divine.” (Innerspace by Rav Aryeh Kaplan z”l page 25) (Atzilus and Atzilut are the same word. Atzilus is the Ashkenazi pronunciation and Atzilut is the Sephardic pronunciation)

[7] The Forefathers are; Avraham (Abraham), Yitzchak (Isaac), and Yaakov (Jacob)

[10] The concept of “G-d’s presence” is derived from the Hebrew word שכינה.  One should be precise and differentiate between a thing and its presence.  Rav Kaplan teaches, “There is nothing we can say about G-d himself…Yet G-d has filled this World with his presence.” (Innerspace by Rav Aryeh Kaplan z”l page 9).

[14] A “Shamash” is similar to an executive assistant for a big rabbi.

[15] The Steipler was the brother-in-law of the Chazon Ish and merited for his son to become Rav Chayim Kaniyevski Shlit”a of today.

YOU CAN ALSO DOWNLOAD A PDF ‘SIMCHAT RABEINU: PARSHAT TERUMAH’ FOR YOUR SHABBOS READING:

Emunah and Bitachon – Hashem already prepared everything for you — Rabbi Berland’s strong words!

Rivka Levy - September 15, 2020 1
UPDATE FROM RIVKA LEVY SEPT 15TH 2020 UMAN, UKRAINE After a week of sitting here feeling sorry for myself, today the mood finally ‘broke’ and I am fighting back. In case you didn’t know, my blog...
Read more

editor - September 12, 2020 2
I never planned to be in Uman for Rosh Hashana 5781. Or any other Rosh Hashana, for that matter. It's a time for men to gather en masse by Rabbenu, and while I miss my husband...
Read more

YD Bergman - September 9, 2020 3
WATCH THE RECORDING OF THE LIVE WEBINAR ALL ABOUT RABBI BERLAND AND THE COMING OF MOSHIACH PART 24 - Connecting to The Tzaddik From Outside of Ayalon Prison RECORDED ON AGUST 30 2020 The password for the...
Read more

editor - September 9, 2020 1
The holy Kaliver Rebbe ztz"l when asked what he thinks about the machlokes against Rabbi Berland replies: "Whoever touches even one hair of this tzaddik will at the end receive... may Hashem have mercy "Rabbi Berland...
Read more