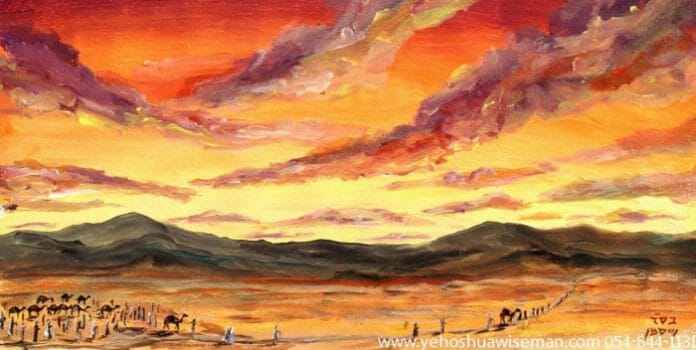 “Wander the world to

bring lost Jews back to Hashem”

In Torah 27, Rabbi Nachman explains the pasuk “Yaakov arrived safely at Shechem,” which is a concept of “worshipping Him with a Shechem Echad, a united resolve” (Tezfania 3:9). This is awakened through Shalom, peace, and comes through the aspect of Yaakov, who is he’aras panim, the radiant countenance.

When Yaakov arrived at the city of Shechem, where the worst murderers resided, he came with he’aras panim, with such a shining face that there was an immediate awakening in the town. Everyone wanted to make teshuva—to keep Shabbos, to throw away all their idols, to stop their running after money, and to start serving Hashem. Yaakov Avinu already made them Shabbos boundaries, fixed a currency, and established bathhouses. Everything that he told them to do was holy in their eyes, and this is what Rabbi Nachman explains, “That when he [Yaakov] came, he established faith.” “Fixing a currency” means that he fixed the desire for money. And when he fixed the desire for money, the flaw of idolatry was fixed. And this is the meaning of “he made bathhouses for them,” as it is written, “And the daughter of Pharaoh went down to bathe” which Chazal explain (Megillah 13, Sotah 12) as cleansing herself from the idolatry of her father’s home (Likutei Moharan 23). The Ramban explains that this is what was bothering Yaakov when he said to Shimon and Levi, [in killing the people of Shechem] “you have achartem/embarrassed me” (34:30). In truth, the inhabitants of Shechem were ready to make complete teshuva–they had started making teshuva–and they saw Yaakov and his sons as angels, like heavenly beings. All the people of Shechem nullified themselves before them. It pained Yaakov because they had already accepted upon themselves the Shabbos boundaries and that they had already established a currency, which means that they already had started breaking their desire for money. And they had established bathhouses, meaning that they had started to distance themselves from idolatry. “You have achartem/embarrassed me” – I wanted to bring everyone back in teshuva. By wiping out the city, you have destroyed everything I wanted to do, all my hopes.

Truly, the greatest thing is to bring people back in teshuva, but how does one do this?  How does one merit this? Only if a person has hadras panim, a majestic countenance, will he have panim me’irot, a shining face and then he will have a holy face so that just looking at his face will cause people to return in teshuva. On the gravestone of Rebbe Aharon from Karlin, it is written that 80,000 people made teshuva because of him. How did they make teshuva? Did he go and give classes and lectures? What happened was is that people saw his shining face, his hadras panim, and everyone returned in teshuva. To merit to hadras panim, to he’aras panim, Rabbeinu says in Torah 27, is only through learning the holy Gemara, because you can’t get people to make teshuva if you have no intelligence, if you have no understanding. A person needs to have great intelligence, just as the Rebbe said, “I wanted that you would have such intelligence that there hasn’t been for several generations already.” Why shouldn’t we take the Rebbe’s advice and do what he wanted us to do? Let’s do what the Rebbe wanted. The Rebbe didn’t want us to run around aimlessly, dancing around for no reason. The moment that a person learns Gemara and poskim, he receives such a light that he will have the 360,000 holy lights (nehorin). Everyone will run after him, everyone will abandon all their heretical thoughts. All their questions will be answered. And he will come with such a light, such a he’aras panim, emitting such rays of light—“the wisdom of the man enlightens his face.” People see such a light, such wealth, such joy on the face and they return in teshuva. What do people want? People want to be happy—that’s what they want—and the minute that they see that true joy is found by someone who learns Torah, who learns poskim, and whose face is shining like the sun, then everyone returns in teshuva.

The main point of learning Torah is in order to teach it to others, as it is written [in the blessings before Shema], “put it in to our hearts…to learn and to teach.” Once a person is knowledgeable in Torah, he is obligated to teach it to others. The Torah that a person learns is measured according to how much chesed and how much mesirus nefesh he is prepared to give in order to teach others. After a person learns eight or ten hours, he must show that he has the strength, the light, the influence, to bring people back in teshuva. This is the primary action that comes from learning. Each person can bring thousands and thousands of people back in teshuva. A group of 100 people can bring a thousand back in teshuva, and within a few years all of Am Yisrael will do teshuva. If we will start bringing people back in teshuva, then also the nations of the world will return in teshuva. Our purpose is to bring the whole world back in teshuva, even the non-Jews. This is what Hashem loves. Hashem is waiting for us to bring all of Am Yisrael in teshuva, all the nations of the world in teshuva. “All flesh will call Your name, and all the evildoers will turn to You, and every being in the universe will recognize and know You…”  Why do we say this? Why do we say these pesukim? We need to draw the farthest people close so that everyone should call out in the name of Hashem—even goyim. But first we need to draw the Jews back. If we start with the Jews we can then bring the goyim back. Everyone will do teshuva and will come close to the faith of Israel and serve Him together.

“And he graced the countenance of the city,” for six days you studied, worked, and traveled to bring people back in teshuva. Now Shabbos has come, do nothing but sing to Hashem, and this is “and he graced.” Yaakov made them take a break, he taught them not to go out on Shabbos from their homes. “Stay at home on Shabbos–sing on Shabbos.” One day a week is given to man to sing to Hashem. Shabbos has arrived: sit with your children, sing with your children, learn with them, so that they will see what oneg Shabbos is all about. This will make such a kiddush Hashem in the world, in all the worlds, in all the sefiros—a person sings the Shabbos songs, the whole world hears it–it is heard in every country. This is what awakens all the souls to return in teshuva. A person sings in the privacy of his own home and sings songs to Hashem then all the souls hear his zemiros and his melodies. “And He rested.” Sit at home and sing the Shabbos songs. You will see the whole world return in teshuva, simply from the Shabbos songs, the Shabbos tunes. When one sits at home on Shabbos and sings the Shabbos songs, this gives his children yiras shamayim. When they see their father sitting peacefully and singing tunes, they will have such a good feeling in their hearts, such peace of mind—this becomes their whole life force. This is their whole joy. From this alone they will lose all interest in what is going on in the street. They won’t be interested in the futility of the street. This is all that the child needs: to see his father smiling and happy, calm and singing, sitting for at least two hours at the Shabbos table and singing. This gives vital energy to the child for the whole week. Start to be a simple Jew. The minimum one needs to be a Jew is to sing the Shabbos songs—without this one hasn’t even started being a Jew. If a child sees that his father doesn’t sing the Shabbos songs and he doesn’t learn with him, then he won’t have any reason to stay at home. In the end he will fall into bad behavior, chas v’shalom. He won’t comprehend kedusha. He won’t comprehend purity. A person doesn’t realize the greatness of the Shabbos zemiros. One can resuscitate the dead with the Shabbos zemiros, just as it is told of Rebbe Mordechai who wrote the song, “Ma yafis, uma na’umt ahava b’ta’anugim, (Such beauty and such pleasure are in loving Your delights).” His son passed away on Friday night after candle lighting, and he asked that they put the child in the living room on the couch to hear the Shabbos songs. He started singing, “Chai zekof mach, (Hashem stands erect the one in need)” and the child revived. Shabbos arrives. A person sings all the Shabbos songs and he enlivens everyone. Everyone comes alive. Everyone is happy—everyone is content—because the Shabbos songs give the joy and life force to the whole week.

Parshat Toldot: Rabbi Akiva’s soul was hidden in the heel of Eisav