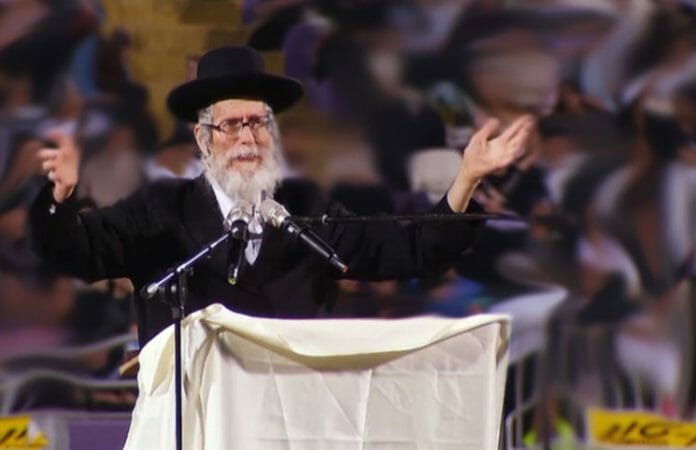 Note: This event really ticked off the Israeli government and immediately following the event they sought to silence the Rabbi by publishing false accusations in the Israeli media and then seeking to “question” him which in Israel means guilty until proven innocent, and like many before him he can sit in jail for years until and if through the tough bureaucracy his innocence is allowed to be proven. Smartly he chose to leave the country before this could happen. But Israel does not give up quickly and they are chasing him around the world as if this peace supporter is the most dangerous person in the world. This is as King David writes in psalms “I am Peace, but when I speak they are for war”. Just as they chased King David they are chasing his successor, and so will be with the Messiah who is from the house of David. In the words of the Ramban (Nahmanides)
“כי בבואו בתחילה עני ורוכב על חמור, יבואו עליו נוגשי כל עיר ושוטריו ויענו אותו בחירופין וגידופין וכו'”
See here for Hebrew text https://docs.google.com/file/d/0B0IwzOFg1KSha29BTWtOQ0JGa1U/edit?usp=sharing
The news article about the event can be seen here http://www.haaretz.com/mobile/yeshiva-head-calls-for-intervention-in-syria-to-save-ishmaelites-1.448289?v=937F982AF162CF37A331868CF92681D1
Here is more text from the speech:
“The Talmud teaches us that we need to do acts of kindness to Arabs, it does not matter what kind of Arab it is! Other than a terrorist we need to help and assist every single Arab in every way possible; with money, with encouragement, in every way possible, even to split the sea for him! All the more so when we see the horrible massacre that is happening two hours from here [in Syria], right under our noses! And the entire world is silent! Kofi Annan says we’ll take Ahmadinejad to make peace! He will stop the terrible massacre! This past Thursday 170 children were killed, two days ago 107 children, everyday they are slaughtering right under our noses, and Kofi Annan says, “We’ll take Ahmadinejad”! He will make peace! He who creates all the weapons of mass destruction! He will make peace! What have we come to?! What kind of merciless world have we come to?! The Nations of the world are silent. And we the Israelite Nation, the Nation of Justice, Nation of Conscience, Nation of Fairness, The Israelite Nation is the conscience of the entire world! The entire world lifts up their eyes to the Israelite Nation, the entire world believes in the Israelite Nation, the entire world knows that the Israelite Nation will bring the redemption, only the Israelite Nation will bring the Messiah! And now at this peace rally we need to come out with a strong objection to the entire world and demand immediate intervention in Syria, to stop the horrible massacre, to stop the terrible slaughtering by the Shabiha cult and the entire military, and to stand at the side of these unfortunate forlorn people, it does not matter if they are Ishmaelite’s and it does not matter if afterwards terrorists will rise up from there, our first priority is to save the unfortunate children, the infants, the women, this is the first mission that the Nation of Israel must place before themselves. “Beloved is man for he was created in Gods image”, every person is in the image of God! There is no difference between Jew and Non-Jew! Everyone is in Gods image! Every person is composed of sparks of godliness! God created them all! All of mankind! 7 billion people – They are all the same! For “Beloved is man who was created in Gods image”, and it doesn’t just say “beloved”, it says “Excessive affection is deserving to man since he was created in Gods image”, this saying from the Ethics of our Fathers is said about all the nations of the world! When we go pray at the shrine of Joseph the Righteous, and I see Israeli Soldiers standing there with M-16s, I say to them “are you not ashamed?!” Here lies Joseph the Righteous! What are you afraid of?! Why are you standing with M-16s?! I used to walk here alone when I lived in Bnei Brak, I walked here by foot! Who needs these M-16s?! Arabs are good people! Who needs these weapons?! Let us go! There is nothing to be afraid of! Ishmaelite’s are our cousins, we are all sons of Abraham and Isaac, we all come from the same father, from the same God, we all come from the same roots, the same race. When we went to war with Amon and Moav the Prophet got up and said “Just play music! Just sing! Throw away all instruments of war! Throw away all your weapons! Begin singing! Just sing!” So Jehoshaphat said to them “If you believe in the words of the Prophet then you can win over all of your enemies only through song and music”. Because all of our victories and all of the wars that we won through the use of weapons are not considered “victories”! Any war that is won through weapons is not eternal, they also have weapons, they have the atom bomb, one day everything can turn around. “Victory” is only what we win through the power of song and music which awakens the Jewish spark in every nation in every gentile, in every single Arab, for there does not exist an Arab or gentile that does not have within him a Jewish spark. We just need to arouse that spark then automatically there will be peace in the entire world! Then “The wolf will live with the sheep and the leopard will lie down with the goat; the calf, the lion and the sheep will walk together and a young child will lead them, a cow and bear will graze together, and an infant will play by a viper’s hole” (Isaiah 11:6).”
ASK ADVICE - RECEIVE A BLESSING