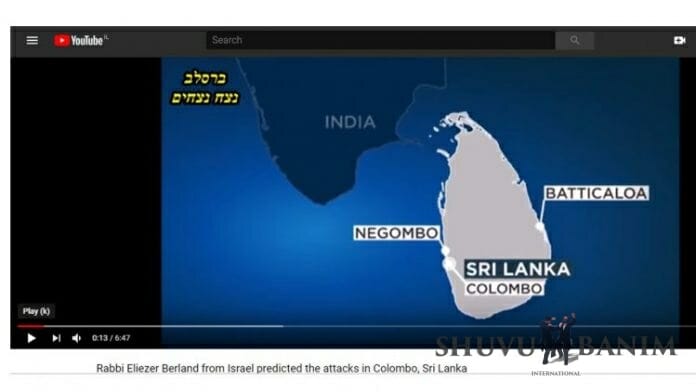 On April 21, 2019, over 250 people were killed, and 500 more wounded, in a series of terrorist bombings that rocked Sri Lanka. The main targets of the campaign of co-ordinated bombings were churches and luxury hotels in Sri Lanka’s commercial capital, the city of Colombo.

For two weeks before the attacks, Rav Eliezer Berland spoke repeatedly about Colombo, in Sri Lanka, and urged his followers to go there. In the video below, you can hear and see recordings that were made at the time, that clearly show the Rav talking about going to Colombo – repeatedly – in front of many hundreds of his followers.

After the attacks occurred, Rav Berland said that if his followers – one of whom actually bought a ticket to Colombo – had gone there, the attacks could have been averted, and the decrees could have been sweetened. He also stated that the job of a Jew is to make sure no one in the world dies.

“We need to go out of our way to save every soul regardless of race or religion.”

But perhaps even more troubling was the Rav’s statement that the attacks were meant to have occurred in Jerusalem instead, but the plans were switched at the last minute.

Less than a week later, the Poway shooting occurred in a Chabad synagogue in San Diego, and then the following week, almost 700 rockets were fired into Israel from Gaza, killing 4 people and injuring another 200.

In these difficult, troubling times, it’s a consolation to know that we have a holy Tzaddik in our midst who can foresee what is about to occur, and who can exhort Am Yisrael and the nations of the world to make teshuva and sweeten the decrees.

There are English subtitles for the first half, and you can access them by clicking on the subtitles tab at the bottom of the screen.