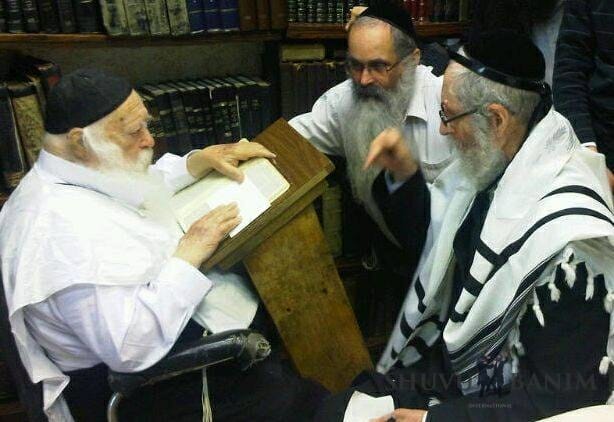 What happens when Moshiach comes?

With all the ‘buzz’ about Rav Chaim Kanievsky’s latest comments about Moshiach coming before the Israeli Elections, to be held on April 9th, 2019, I thought I’d just collate some of the sources that have appeared about Moshiach on the ravberland.com site.

First up, this Midrash from the Pirkei HeiChalot Rabbati, which describes how we will be able to identify Moshiach:

The generation in which Moshiach will be revealed is:

“a poor generation, that doesn’t have any merit except to stand and make criticisms against them [i.e. against Moshiach and his people]. And they disgrace them and degrade them in the marketplaces, and in the streets, and they say things about him that the ear shouldn’t even hear.”

That Midrash continues that Moshiach will be imprisoned, slandered, horrible announcements will be made about him in every city in Israel, and he’ll have his image destroyed. The Midrash continues:

“It’s written in Kohelet 4:14: ‘From prison he [i.e. Moshiach] came out to rule…” – but after a short ‘ceasefire’, his enemies amongst the Jewish people continue to mock and disgrace him, and start calling the Moshiach meshuggah (crazy).  God Himself comes out to bat for the Moshiach, and tells people: “And all who believe in him will not be erased from the book of life.”

Next up, we have the sources describing how Moshiach will reveal himself gradually, not in one big, glorious burst of publicity:

In Tractate Sanhedrin 97 of the Gemara, it says that: ‘Moshiach will come riding on a donkey’. In his commentary on this Gemara, Rashi explains that this means that Moshiach will be revealed ‘bit by bit’, or slowly, slowly.

Moshiach is going to come both from chutz l’aretz, and also from Israel.

The sources who suggest that Moshiach will come from outside of Israel include:

Meanwhile, the followings sources state that Moshiach will come from within Eretz Yisrael:

“The Moshiach will first be in chutz l’aretz, and then from there he’ll come to Eretz Yisrael (and that’s where he’ll start to reveal himself.)”

When the Moshiach comes, he’s going to be accompanied by the police and have to sit in jail.

The Ramban (explaining the quote from Zecharia 9:9, which says that Moshiach will be poor and riding on a donkey) writes the following:

“This means that he’ll be accompanied by prosecutors and policemen, who’ll attack him with abuse and invective.”

The Gemara in Sanhedrin (98:1) says that Moshiach is going to sit: “At the entrance of Rome”. The Ramchal explains (in Kinat Hashem Tsivakot Part 2): “This means he’ll sit in prison” – as is mentioned many times in the midrashim.

When Moshiach first arrives, he’s going to be the subject of enormous machloket (controversy).

In the Megillat Setorim, or Hidden Scroll of Rebbe Nachman, Rebbe Nachman tells us that: “At the beginning, there is going to be a huge machloket (controversy) surrounding the Moshiach.”

The Midrash (in Pesikta Rabbati Parsha 34) says: “Even at the time that the Moshiach is sitting in prison because of our sins, there will still be so-called ‘religious people’ who will continue to mock and make fun of him.”

Then, there’s Rav Berland’s own statements about the geula process.

At the moment that Moshiach would be revealed, Armilus HaRasha [the head of the mixed multitude, or Erev Rav] would come, together with all of the nations of the world, and he would try to fight against the Moshiach. So then the Moshiach would escape to the desert, together with some simple, pure-minded people, and there they would hide-out for nine months, the same amount of time as it takes to bring a pregnancy to term.

After nine months, the Moshiach would return and would reveal himself openly to everyone, and then everyone would reconcile with him, and make peace with him. The Rav said that the moment that Moshiach received his [spiritual] crown on the day of hakhel, soldiers will come from all over the world, with warships from all the nations of the world, against Eretz Yisrael.

Rav Berland said at that time:

“We are now preparing the Yom Kippur of 5776, preparing the Yom Kippur a day of salvation of 5781 when the Rosh Hashanah will come out on Shabbos and Pesach on Motzaei Shabbos and there will be a Purim Meshulash, when there will be the geulah, then it will be a day for relief, 5781, so will the true salvation to Israel, which Daniel prophesized that this will be on two thousand and three hundred, morn till eve, 2300 years, which will end in 5781, the year of Israel’s salvation.

Then, there is this Midrashic Source for ‘eating grass in the desert’ at the time of Geula, from Midrash Heichalos:

“Evil King Armelius will arise and tell Edom: “I am your messiah! I am your god!”

The people will immediately believe in him and unite under his leadership. He will say to Esav’s descendants worldwide: “Bring me the Torah I gave you!”

“Every nation will present its religious law. Armelius will declare: “I gave you this law. I am your god.” He will likewise summon the Jewish people and say: “Bring me your Torah, and declare me your god!” The Jews will be shocked and frightened…

Nechemiah will say: “You are not God, but the Satan!” He and thirty thousand mighty Jews will battle Armelius and kill 200,000 of his soldiers. Outraged, Armelius will mobilize and international army and wage a terrible war against the Jewish people. Thousands of Jews will be killed, including Nechemiah, who will die in the afternoon….

Moshiach ben David and Eliyahu HaNavi will reveal themselves to the Jews hiding in the wilderness and restore their spirits. The people will know God has saved them. As it is said, For God has redeemed Yaakov, and ransomed him from the hand of one stronger than he (Yirmeyahu 31:10), and those lost in the land of Assyria and the outcasts in the land of Egypt will come (Yeshayahu 27:13).

The nations will fear God. Heretofore scattered, the Jewish people will return to Israel with Moshiach. Uniting in the Judean desert, the Jews will go to Jerusalem. Remnants of the house of David will rise up from the ruins, and Moshiach will rule.

All the original posts are hyperlinked in the text, if you want to take a look at the full versions of what I’m quoting above, but I wanted to pull together the basic ideas of each one into one piece, so we can all hopefully get more of an idea of what geula really looks like.

In a nutshell: it’s a potentially scary mess.

There’s going to be huge machloket over the Moshiach, who will spend time being defamed, slandered and mocked in prison; then, as soon as he’s properly revealed, a huge army is going to come and wage war against Israel, together with a false messiah; and the geula process began in 5776 and is going to continue on until 5781.

Beyond that, we’ll have to wait and see what happens next, and how this actually all plays out.

A last thing I just wanted to mention is the importance of asking God to show us who the true tzaddikim really are, because the Midrash Heichalos makes it clear that there will be at least that one ‘false messiah’ in the mix, too.

If we simple Jews are attached to true tzaddikim, we don’t need to worry about trying to figure out all this stuff.

If our tzaddikim tell us ‘so and so is the Moshiach’ – good enough! We don’t need to break our heads trying to figure out who the real Moshiach really is. The true tzaddikim already know, and they will announce it publically, when the time is right.

But Rebbe Nachman also warned us there would be so many false leaders at the end of days, misleading people with their heresy and false ideas. And these false leaders are for sure going to be against the real Moshiach – so it’s going to get confusing for anyone who doesn’t have strong emunat tzaddikim, and for anyone who isn’t attached to a true Tzaddik.

Two weeks ago, I was writing about geula fatigue. This week, following Rav Kanievsky’s statement, I’m putting together sources about how to spot Moshiach. Honestly? I have absolutely no idea what’s really going on.

But I know that the Rav does, and when the time is right, he’ll tell the rest of us, too.