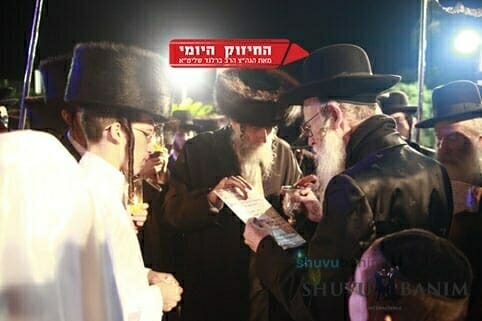 The Daily Chizzuk with our Rebbe, the Gaon and Tzaddik Rabbi Eliezer Berland Shlit”a – “You receive the mochin by way of your wife.”

Why does a person have to get married?

A person receives the mochin [supernal mentalities/mind] only by way of his wife – “with this, Aharon may enter the sanctuary” (Vayikra 16:3).  “This” is one’s wife – if he’s not married, it’s forbidden for him to enter the sanctuary.

A person receives all the mochin by way of the mochin of his wife.  Then he receives the mochin.  If not, he doesn’t receive any mind.  He doesn’t develop.

Channah’s prayer to merit to the light of Mashiach

“May [Hashem] judge to the ends of the earth; may He give power to His king and raise the pride of His anointed one” – that the entire prayer of Channah was to merit to the light of Mashiach.

Why there isn’t a fifth cup on Seder night?

“I will take” is possible, but the language of “I will bring” we don’t drink.  This is the cup of Eliyahu HaNavi.