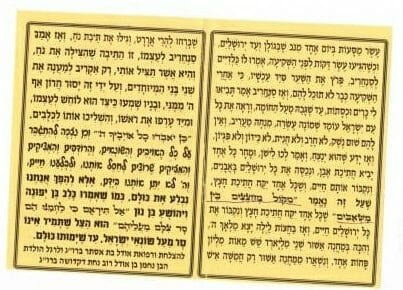 Master of the world who can do anything, we are like orphans with no father. The True Tzaddik is called a ‘father’, who is the yechida (unique one) who guards us from every bitterness, from every trouble and from every precipice, and from every affliction and illness.

And now, because of the absence of the Tzaddik, we feel as though we’re lacking all protection, like orphans who have no father.

Answer, Hashem, “our mothers are like widows”, who are those without the True Tzaddik, who has disappeared from them, and become hidden from them, as it’s written:

“And I will hide My face from them” – that for as long as the Tzaddik hides his face from us, they are orphans lacking any protection. For “Listen, my children, to the mussar of your father, and don’t abandon the Torah of your mother.”

Answer, Hashem, we have lost our father and mother, i.e. the Torah and prayer, that only with their strength we can fight the holy war.

“Our mothers are like widows” – that even if the mother remains alive, it still has no vitality, and no inner dimension, and just remains a mother alone, which is prayer. But, she doesn’t have the strength she once did, which could help us to win all our wars, like at the time of King Hezkiyahu.

In the merit of the prayer and the Torah that King Hezkiyahu introduced into Am Yisrael, they merited to beat the 200,000 myriads, plus 600 soldiers of Sancheriv, who were two billion and 600,000 soldiers, minus one, who crossed the Jordan. And there didn’t remain even a drop of water in the Jordan, and they did 10 voyages in one day, from Nov in the Golan, until Jerualem.

And when they got there, 10 minutes before shkia (halachic twilight), the Chaldeans said to Sancheriv, breach the gate immediately, now! Because after shkia, you already won’t be able to do it. And Sancheriv said, bring me pillows and featherbeds.

When he looked over the wall, and saw all of Am Yisrael standing and praying the Shemoneh Esrei, minchah and ma’ariv, and they didn’t have any weapons, not a sword and not a spear, not a lance and not a dagger – and then he understood that he would win.

So he said go to sleep, and tomorrow every person will bring a bit of stone, and we will enter all of Jerusalem with stones, and bury them alive.

And that every person should take a bit of wood, which about this it’s said: “Rather than the sound of the arrows aimed at the water drawers.”

That each person would take a piece of wood, and bury the whole of Jerusalem alive.

And they discovered Noah’s ark, and then Sancheriv said to himself, this is the ark that saved Noah, and it is that which will save me, only if I sacrifice for its sake my two special sons.

And because of this, Hashem’s anger flared against him, and his sons heard from the side what he was murmuring to himself, and immediately decapitated him, and gave it to the dogs. “So will all of Your enemies be destroyed, Hashem.”

So too, may we merit to overcome all of our enemies and those who hate us.

And those who pursue us and harm us and oppress us, who want to wipe us out and to swallow us alive. And Hashem will not give us into their hand. Rather, the opposite: We will swallow all of them!

As Calev ben Yefunah and Yehoshua bin Nun said: “Do not fear, because they are our bread, their protection has departed from them!”

This is the protection that doesn’t leave the haters of Israel, until they all die.