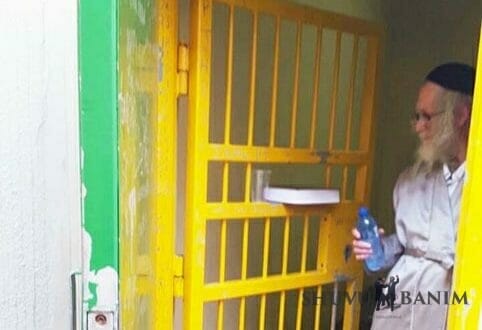 “You have no greater mitzvah than Pidyon Shvuyim (the redeeming of captives) — “Charity saves from death” (Mishley 10:2).

Friends of Shuvu Banim and talmidim and followers of our teacher Rabbi Berland shlit”a, Hashem be with you!

As is known to everyone, a lengthy struggle is being conducted against the Justice authorities regarding our teacher, Rav Eliezer Berland shlit”a.  The wider public isn’t actively involved, but the battle is long and difficult, and the people involved are collapsing under the burden of legal expenses and the attorneys of the Tzaddik

“Charity for the redemption of captives comes before sustaining the poor and clothing them, and there’s no greater mitzvah than redeeming captives. The captive is in the category of the hungry, the thirsty, and the bare, and stands in a matter of life and death.  The person who turns his eyes from redeeming them violates the prohibitions, ‘Don’t harden your heart and shut your hand’ and on, ‘Don’t stand by your fellow’s blood,’ and on, ‘Don’t subject him to hard labor before you.’  He also nullifies the [positive] commandment, ‘You shall surely open your hand to him,’ and the mitzvah, ‘Your brother shall live with you,’ and, ‘Love your fellow as yourself,’ and, ‘Save those who are being taken to death,’ and many verses like these.  And you have no mitzvah that is great like the redemption of captives” (Rambam, Hilchot Matnot Aniyim 8:10).

Please, see to donating with self sacrifice to the “Pidyon Shvuyim” fund for our great teacher Rabbi Eliezer Berland shlit”a!  The Rabbinic Committee of the community has just come out with a message instructing every family to give a minimum of 500 NIS, whoever can give me should give more. It’s possible to give money from one’s ma’aser tithes.

“Every moment that ones delays the redemption of captives when it’s possible to give earlier, it’s as if one spilt blood” (Shulchan Aruch, Yoreh Deah, Section 252, Halachah 3)

This isn’t a time to be silent!  This is a matter of life and death!  Please hurry to fulfill the mitzvah, and don’t say, “When I’m free I’ll [do it]; perhaps you won’t be free.”

To hear the words of the Rabbis of Shuvu Banim (in Hebrew) and to donate by phone, call from Israel *9148, extension 10. Or you can make an online donation HERE

The words of the Gaon Rabbi Yitzchak David Grossman shlit”a, Chief Rabbi of Migdal HaEmek and Chairman of Migdal Or Institutions:

“Our Sages tell us ‘[When] one opens a door to his fellow, he owes to him his very soul.’  How many hearts our Rabbi and Teacher HaRav [Berland] shlit”a opened, returning Jews to Torah and bringing them close to the HaKadosh Baruch Hu!  He sacrificed his soul for every Jew.  I know the Rav for forty years, and I know how much self-sacrifice he has to help Am Yisrael.  Now when he is in suffering, we are obligated to remember ‘he owes to him his very soul.’  Anyone who can help or can influence others to donate, please do so. There is not greater mitzvah than this!

“With Hashem’s help, the Rav will return to lead the community, give shiurim, and make the Torah great and glorious, and with Hashem’s help prepare us all for the complete redemption soon.  This is the goal.”

“Even if we were talking about the simplest Jew in the world, the mitzvah of redeeming captives is a giant mitzvah.  All the more when we are talking about my Master, Teacher, and Rabbi HaRav Eliezer ben Etyya shlit”a.  Anyone who has ever traveled to or ever will travel to Uman—everything is in the Rav’s merit.  I testify to this very unambiguously—he opened the way to Uman in a way that’s undoubtable, with complete self-sacrifice.  One day I will tell you the things that I mamash saw with my own eyes, self-sacrifice.  Therefore, we need to help by donating to Pidyon Shvuyim.  We are talking here about a great tzaddik who took upon himself suffering for our sake, and we also have here a case of returning the favor in that we have made it to Uman.  And not only that, but everything about Rabbeinu, [the Rav] opened up with self-sacrifice.”

“When King David fled Avshalom, all the people who were with him helped with simplicity and self-sacrifice.  Even though King David was on a spiritual level that he apparently could manage on his own, this is our work that we are obligate to help.

“We all feel that the entire situation of the Rav and everything that he’s going through is something very spiritual and on a very high level, and this is the truth.  Besides this, we need to simply ‘know on earth Your ways,’ to do everything that’s in our ability to help the Rav.  This is certainly our obligation.

“It’s true that the Rav copes [with the situation] with phenomenal strength, which it’s almost difficult to grasp in human intellect how the Rav holds up through all this terrible suffering.  But our obligation is to help him.  There’s no question about this.

“There was an incident that once people tried to injure Rebbe Nachman, and his followers at a certain point abandoned the place and relied on the merit of Rabbeinu.  Even though there were miracles and Rabbeinu was saved, afterwards he was stern with them saying to them explicitly, ‘You need to do your part and not rely on my merits.  You needed to stay behind and protect me.’  Our obligation is simple to help the Rav.”