A vision of geula, and a message

Moshe R. is an avreich [full-time Torah learner] of the Karliner Chassidut, who was interviewed for the recent Knishta Hada Newsletter, #65, which was published just before Succot, 5779. You can hear his story firsthand in the original Hebrew, by calling: 079-9642-148. In the meantime, we are pleased to share the following translation:

“When I was young, I came across some of the pamphlets written by the Tzaddik of Yavniel, the Moharosh, zt’l,” begins Moshe. “His words really spoke to my heart, and from that time on, Rebbe Nachman’s books have been an ongoing source of interest to me, even though I never actually joined a Breslov kehilla (community).

This is dangerous stuff!

A few years’ ago, I came across a newsletter with the teachings of Rav Eliezer Berland, shlita, but a friend of mine warned me off, and told me it was forbidden – assur – to read them, because “it’s dangerous stuff!” I was shocked by his words, and backed away. But after some time, I got curious again, and I happened to glance at another one of the newsletters from Rav Berland, shlita.

It contained some very fiery words about the importance of shmirat eynayim (guarding the eyes), things that I’d never heard before in my life. From that point on, I started to strengthen my observance of shmirat eynayim when I was out on the street. But the words of my friend kept ringing in my ears: “That newsletter is dangerous stuff!”, so I stopped reading Rav Berland’s newsletter again for a long time.

Who is the Tzaddik of this generation?

Then about five years’ ago, Hashem arranged things so that I would get a chavruta (Torah learning partner) for Likutey Moharan [Rebbe Nachman’s sefer] who happened to be a student of Rav Berland. When we reached the lesson that was talking about the Tzaddik that exists in every generation, and how the whole matter of a person’s service of Hashem really depends on him connecting to the Tzaddik HaDor, I asked my chavruta: “Who is the Tzaddik of this generation?”

He replied: “There is no doubt that the Tzaddik HaDor, the Tzaddik of the generation is Rav Berland.”

Once again, I was shocked. I asked him: “How can you be so brazen to say something like that?! How can you be so very certain?!” The chavruta told me: “Go and do some hitbodedut (speaking to God in your own words) on this matter, and ask God to grant you the merit of knowing who is really the Tzaddik HaDor of our generation, and how to come close to him. And then you’ll see for yourself.”

Praying to know the truth

From that point on, for a very long time, I did a lot of praying, and a lot of hitbodedut about this matter. I asked Hashem to give me the merit of knowing who really is the Tzaddik of our generation, and that I should come close to him. Every time the thought entered my head that maybe it was Rav Berland, I pushed it away, because I had a lot of kooshiot (difficulties and questions) regarding the Rav, from all the lashon hara I was hearing on the street.

Despite all this, even though I really didn’t know anything much about the Rav, I still didn’t see that the correct thing to do was to really check things out myself, firsthand.

A vision, and a message

One night, after a few nights of doing some intense hitbodedut on the matter of searching for the real Tzaddik of the generation, I experienced something akin to a vision, it was so tangible, and so real. It was such an intense experience, all my body started to tremble, from my head to my toes, in a way which is difficult to really describe.

In the vision, I was told: “This is certainly Moshiach” [Rav Berland] was giving over divrei Torah, and the words that came out of his mouth were like fire, mamash. Everyone was only looking at him, and it was understood that the entire world was created to hear words of Torah from the Tzaddik. All there was, was the Tzaddik and listening to his Torah.

There was such a sense of achdut (unity) there. No-one was divided from anyone else, no-one was looking at anyone else askance. “Like one person, with one heart.” I said to myself that I’ve always been looking for achdut, and here, I beheld true achdut: Am Yisrael with the Tzaddik.

I mamash felt the sweetness of the Torah, and it was amazing. I saw that Gan Eden is really just composed of the reward you get for learning the Torah.

I said to myself, if we would really know how sweet the Torah actually is, everyone would be learning Torah day and night. There was such a sense of peace, like at Matan Torah (the giving of the Torah). The whole community of 7,000 people were Jews who’d been learning Torah in exile every day, for many hours a day. They’d continued learning even when they weren’t always able to enjoy it, and they had genuine emuna that Hashem would reward their Torah study.

To be there, and to listen to the Tzaddik’s words of Torah was simply the most pleasurable thing possible. It was indescribable.

“Publicize this to Am Yisrael!”

And then they said to me, to my neshama: “Now you’re going to see a vision which is a prophetic message that you have to publicize to Am Yisrael.” This is what I saw:

Each time that a person doesn’t guard their eyes, or falls into a lust for money, then immediately we can’t see the Tzaddik anymore, and we don’t see Am Yisrael. Everything goes dark, and we experience terrible pain. We feel awfully, terribly alone.

This was the message that they wanted me to pass on, because all of the confusion and the distance we feel in our hearts from the Tzaddik comes from these two lusts. Therefore, the moment a person overcomes these lusts, all the problems disappear.

This message repeated itself three times in the dream, then the Tzaddik reappeared in front of me, and I felt a tremendous sense of pleasure and happiness.

An angel of Hashem

Amongst the tzaddikim that were there [in the vision], I only identified one person. He wasn’t a Breslover chassid, but he learned for many long hours. I remember him sitting in kollel, and even though he didn’t have a chavruta he would learn for four hours straight without taking his head out of the sefer.

Also, when he walked in the streets, he’d wear earphones in order to listen to shiurim, and to not waste any time. Nonetheless, he still seemed very confused by everything that was going on around him, like a shell-shocked refugee. He couldn’t understand, at all, where the Rav had come from, and how the Tzaddik’s Torah was recreating the world.

He just sat there dumbfounded.

Then, I saw that the Tzaddik was simply an angel of Hashem, without any exaggeration. All of Am Yisrael became united with the Tzaddik, to the point where they stopped feeling their own existence. It’s very difficult to explain this, but this was the greatest joy…It was said there that the Tzaddik only came to the world in order to fix our pgam habrit (sins of intimacy).

I came down from the mountain to look for a mikva, because I understood that this was something very holy, and also because I hoped to maybe see the Tzaddik. While I was coming down, I passed by the opening of a big cave. I looked inside, and I saw a famous Admor (Rebbe), and I suddenly understood that he was a false rabbi.

In the world-to-come, you know things without them being told to you. I understood that this Admor had spent his entire life tricking people. This was a very great embarrassment [to him]. (A false rabbi refers to someone who isn’t really a Tzaddik; rather, he deceives people while serving in his role, and guides them on a crooked path.)

The students of this false rabbi were grabbing his arms and legs and they were pulling at him and shouting at him with tremendous anger. “Why did you leave the holy path that was meant to guide the community?!”

(It appears that the actions and guidance of this false rabbi had caused his followers to lose their share in the world-to-come.)

They threw him on a bench, and you could see enormous embarrassment revealed on his face, due to the fact that he’d misled so many people.

In the world-to-come, embarrassment is a very great punishment. Everyone knows everything about you. 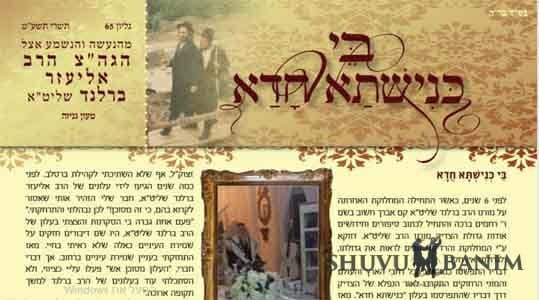 Adapted and translated from the Knishta Hadar Newsletter #65. To download the newsletter in the original Hebrew, please go HERE.