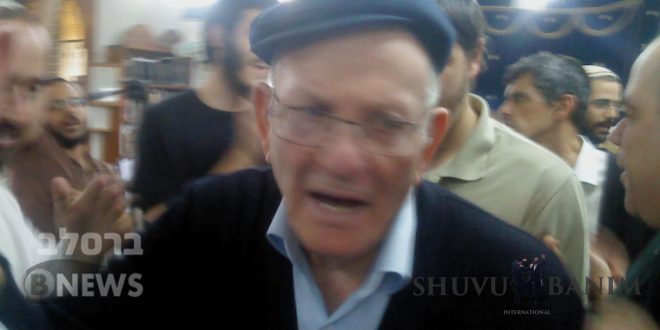 The Milkman, Rabbi Chaim Cohen Perahya, zt’l, has passed away

The reknowned kabbalist Rav Chaim Cohen Perahya, zt’l, commonly known as ‘The Milkman’, has passed away at the age of 84, after a long period of illness. The levaya (funeral) took place this evening, August 13th, 2019, at 21:30 at the Sanhedria cemetery in Jerusalem.

Two months ago, Rabbi Chaim Cohen, zt’l, was hospitalized in intensive care in the Tel HaShomer hospital after complaining of feeling unwell, and remained in a very difficult and serious condition since then. His students asked the public to pray for his healing, and many people undertook prayers on his behalf at kivrei tzaddikim around the country, including in Meron at Rabbi Shimon Bar Yohai, at Shmuel HaNavi in Jerusalem, and at the Baba Sali in Netivot.

Rav Chaim, zt’l, came by his unusual nickname ‘The Milkman’ thanks to his family establishing the ‘Dashan’ dairy in Tel Aviv. He was part of the group of kabbalists who became well known in the 1960s, with each receiving the ‘nickname’ of their particular trade.

Just three months ago, The Milkman met with Rabbi Eliezer Berland, shlita, at his synagogue in Givatayim during a brit mila for Rabbi Berland’s great-grandson, the son of Rabbi Tzafania Sheinfeld, the son-in-law of Rabbi Yehuda Goldbloom, shlita.

This marked the first time that Rabbi Berland, shlita, and The Milkman for many years, and the occasion was marked with great joy, as these two Torah luminaries warmly talked with each other for many minutes.

To the onlookers, it really looked like a meeting of old friends, as Rabbi Berland blessed The Milkman that he should enjoy a long life, and good health, and also that he should lead Am Yisrael to see the face of the Moshiach.

The Milkman, zt’l, responded by kissing the Rav’s hand, and with tremendous holy enthusiasm, he returned Rabbi Berland’s blessing, and also added that “Together! [they should merit to guide the Jewish people to see the face of the Melech Moshiach.]

The Milkman will be sorely missed by the Jewish people.

We pray he will be an eloquent advocate on behalf of the Jewish people, during these difficult days.

David Simcha - December 20, 2020 0
The power of a Pidyon! – Chilling eyewitness testimony of a man who did a Pidyon Nefesh by Rav Eliezer Berland shlit”a for his father who was ill with cancer.  He tells us what...
Read more

“Through the Light of Chanukah, Chana Brought Down the Soul of Mashiach” – Rabbi...

David Simcha - December 15, 2020 0
Rabbeinu Nachman says that because of the greatness of the true Tzaddik, it's only possible to understand his greatness by way of his Talmidim.  These are his holy words (Likutey Moharan 140): "The Tzaddik himself...
Read more

David Simcha - December 9, 2020 0
According to what was widely publicized regarding the prayer gathering in Hevron scheduled yesterday, Tuesday evening, for the release of Rabbi Eliezer Berland shlit"a, thousands answered the call and set out on their way. ...
Read more

IMPORTANT UPDATE: Let’s get the Rav’s books around the world –...