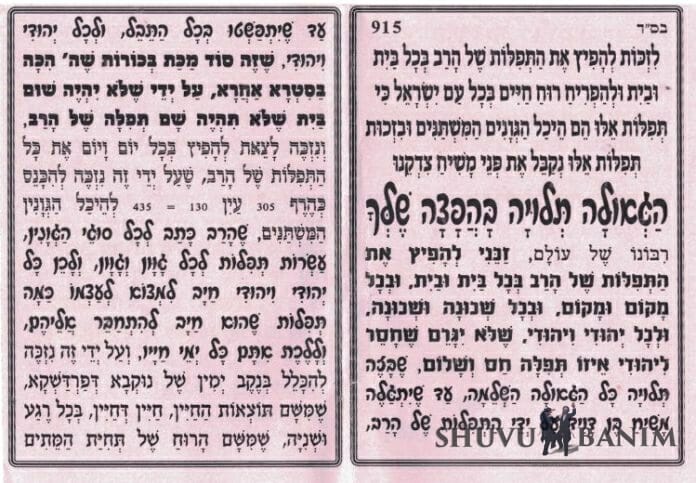 The Geula depends on distributing more of the Rav’s prayers

Rabbi Berland has hinted on a number of occasions over the last couple of years that the geula coming the sweet way depends on getting the Rav’s prayers into every household in the world.

Recently, a new prayer came out which sheds a little more light on the spiritual mechanism behind this request.

In Prayer #915 (reproduced in full below), the Rav explains that:

Which will spread throughout the world, and to every single Jew.

And this is the secret of the makkat bachorot (the plague of the death of the firstborn), that Hashem struck against the Sitra Achra (dark side), by way of there being no house that doesn’t have a prayer there, from the Rav.

As we all know, a series of terrible plagues hit Egypt before the Jews finally left Mitzrayim, under the leadership of Moshe Rabbenu.

The last of these was the Plague of the Firstborn – where the oldest in every household died.

The Jews were commanded to smear the blood of the Korban Pesach on the lintels of their doors, and in this way, they would be ‘passed over’ from the ensuing plague that was set to engulf the Egyptian world.

We look around today, and we can see that the world is in an advanced state of chaos and confusion.

Covid-19, strange weather, economic collapse, social unrest – it seems that we are in the midst of a modern-day series of plagues, BH culminating in the open revelation of Moshiach, and geula.

And in the midst of this chaos, Rabbi Eliezer Berland, shlita, is giving us a segula, a way to be saved from the most severe plague, still to come, from the aspect of makkot habachorot.

And how can we gain this heavenly protection, and give the Angel of Death a siman that our households – and all its inhabitants – should be ‘passed over’?

By making sure that we have at least one prayer of the Rav in our homes.

And making sure that our friends and families also have this spiritual protection, too.

It’s well known that 4/5 of Bnei Israel in Mitzrayim died in the the plague of darkness.

Even after seeing all of the other supernatural plagues and miracles, they lacked the simple emuna, and the simple emunat tzaddikim to complete the process, and follow the redeemer out of exile, and into redemption.

Bezrat Hashem, this time around it will be different, and we will all merit to greet our holy redeemer, and to be redeemed from our current, terrible exile. 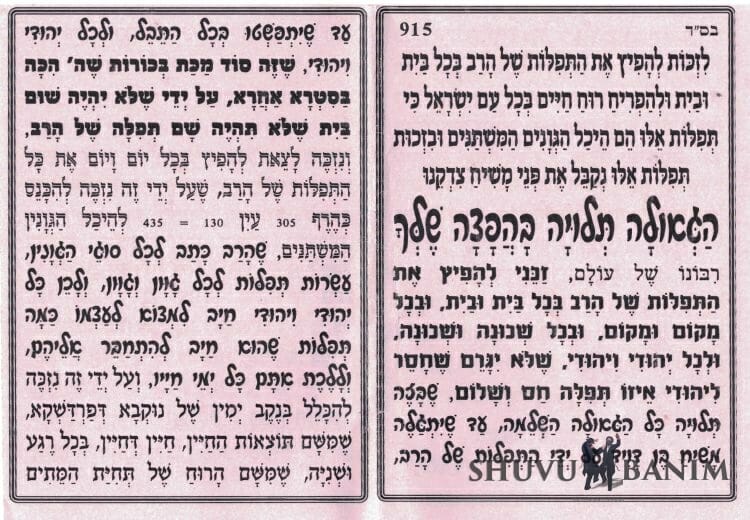 Prayer #915: To have the merit to distribute Rav Berland’s Prayers

And to every single Jew, so that it shouldn’t come about that a Jew should lack some prayer, chas v’shalom (God forbid).

Which will spread throughout the world, and to every single Jew.

And this is the secret of the makkat bachorot (the plague of the death of the firstborn), that Hashem struck against the Sitra Achra (dark side), by way of there being no house that doesn’t have a prayer there, from the Rav. 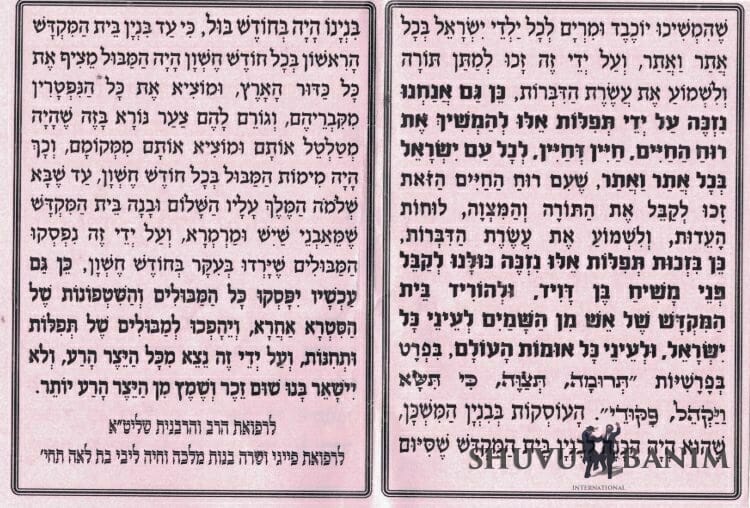 And we will merit to go out and to hafetza (distribution) every single day, to give out all the prayers of the Rav.

And by way of this, we will merit to enter – in the blink of an eye – the Heichal HaGavanim, tens of prayers for each and every gavan.

And so, each and every Jew has an obligation to find for themselves a few prayers that they need to connect to, and to go with them all the days of their life.

And by way of this, we will merit to be included in the right-side hole of nukva depardashka, where the life, life-force and livelihood comes from, at every moment and every second. And from where comes the ruach (spirit) of techiat hameitim (the revival of the dead), which Yocheved and Miriam passed to every child of Israel, in every place and location.

And by way of this, we should merit to Matan Torah (the giving of the Torah), and to hearing the 10 Commandments.

Yes, also we will merit, by way of these prayers, to pass on the ruach hachaim (the ‘breath’ of life), life and livelihood, to all of Am Yisrael, in every place and location.

And with this ruach hachaim, we merit to receive the Torah and its mitzvoth, the luchot ha’edot, and to hear the 10 commandments.

And especially in the parshiot of Terumah, Tetzaveh, Ki Tisa, Vayekhel and Pekudei, which concern themselves with the building of the Mishkan.[1]

And it would wash out all of the dead from their graves, and cause them terrible suffering, because it would buffet them around and take them out of their final resting places.

And this is how it used to be during the days of the floods that occurred in every month of Cheshvan, until Shlomo HaMelech came, (may peace be upon him), to build the Beith HaMikdash from stones of marble and marmara.

And by way of this, the floods that used to descend particularly in the month of Cheshvan were stopped.

Yes, and also now, all the floods and the shitfonim (a different type of flood) of the Sitra Achra will also be stopped, and they will be transformed into floods of prayers and entreaties.

And by way of this, we will be taken out from every yetzer hara (inclination for evil), and there won’t remain within us any trace or smudge of the yetzer hara, any more.

YOU CAN DOWNLOAD PDFS OF RABBI ELIEZER BERLAND’S PRAYER BOOKS, IN ENGLISH, TO DISTRIBUTE, HERE. – FOR FREE!!!

All that’s required is the simple emunat tzaddikim to follow the directions of the Rav, and the will to distribute these prayers to others.

What’s with all the prayers?