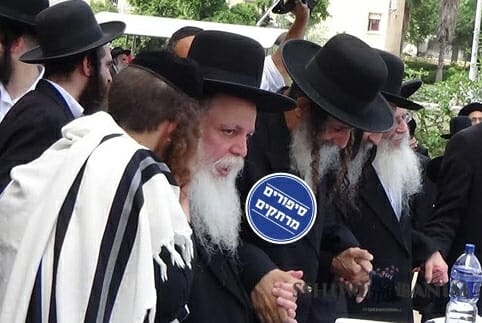 You can read Part 1 of the interview HERE, which concluded with Rav Goll explaining how when he overheard his mother begging his brother to leave the Eastern ‘cult’ he was caught up in, he prayed to God from the depths of his heart to know what the truth is – for the first time in his life.

“Suddenly, someone came to the house and saw my father crying about what was happening with my brother. When he asked my father what was going on, he explained about the situation with my brother, and the man promised to send along someone who had experience dealing with this type of thing.

So, a man by the name of Menachem Piliposky came to see us at home. He was an avreich from Bnei Brak, and at the time that Moranu Rav Berland, shlita, was learning in the Volozhin yeshiva, he was his chavruta. We’re talking about a very special Jew, who’d come closer to Rav Berland, and was a big fan of his.

Many years later, I asked him:

‘Tell me, Menachem, you’re a Litvak; so why did you push us towards Breslov?’

He replied: ‘I knew that only Breslov would interest you, you were only going to be Breslov!’

I remember that he came to us, in our house, and my brother asked him: ‘Tell me, who is ‘the Tzaddik’?’ Menachem started to reel off the names of some of the tzaddikim at the time of the Steipler, like Rav Cheshin, and another name that I can’t recall.

But my brother dug his heels in, and said: ‘There aren’t three tzaddikim! There’s only meant to be one tzaddik in every generation!’

The Tzaddik of the Generation

It was a very intense conversation, and it didn’t look like it was going to be continuing. But this Piliposky saw me dressed up in my uniform, and asked me where I was serving. We discovered that the commanding officer in my unit, who I used to be friendly with, and who had ‘gone missing’ in the meantime, had become chareidi, and was now Menachem’s chavruta.

He told me that he would bring him along, next time he came. Afterwards, it came out that he was practically despairing of being able to help us, and he hoped that this man, called Avi Eisen, would be able to rescue us, somehow. I was very happy to see him. In the army, we used to have a lot of deep conversations.

A lot of people have asked me why I used to use a brown bag with ‘James Bond’ on it, as my bag for tefillin. The story behind that bag is a legend. At that time, my brother had travelled to the USA, to go and visit the ‘guru’. At that time, my dad had a dream that my grandfather, his father, came home from chutz l’aretz and brought him a present – a brown bag with ‘James Bond’ on it, like the one my brother had been using at that time.

My grandfather spoke to my dad in the dream, and told him that his children would make teshuva.

A little while later, my father had another dream where his dad came to him again, and he was so angry, and he was hitting the wall while saying: ‘get the tumah (spiritual impurity) out of the house!!’ In the dream, my father burst into tears, and asked: ‘What, you want me to throw my son out?!’ My grandfather responded:

‘Don’t throw the son out, throw out the tumah!’

At that point, my father asked my brother to remove all the paraphernalia and books that he’d brought into the house, and my brother agreed to do it.

‘Get the tumah out of the house!’

Around that time, my father was lying down on a bed that was opposite a cupboard that had never really shut properly. The cupboard was in the middle of the wall that his father had been angrily striking, in the dream. When my father realized that, he got a ladder, and climbed up to take a better look at the cupboard.

The picture of the ‘guru’

He found the brown bag with ‘James Bond’ on it, and inside that bag, there was a picture of the ‘guru’. The next time my brother came to visit, my father showed him the picture, and my brother admitted that he’d forgotten all about it. When I spoke to my brother afterwards, he was amazed that my grandfather had come in a dream, to complain about the tumah that was in the house. And not only that, but that in the second dream, he’d come with the brown ‘James Bond’ bag.

That whole experience gave my brother a real pause for thought, and my family took advantage of his doubts, to encourage him to go to one of the Torah classes being given by Rav Cheshin, z’tl. Straight after the class, my brother wen to speak to the Rav, and told him about everything that had happened.

Rav Cheshin said to him:

That same night, they went out to the fields to do hitbodedut (talking to God in your own language and words). When they returned, he sat and learned some of the Torah that the Rav had taught him, with my brother.

The Master of the Field

Rav Shalom had seen how that lesson had made a big impact on Rav Tzanani, so he decided to learn it with my brother, too. They were learning it the whole night. Afterwards, my brother prayed the morning service with them, and then stayed at Shuvu Banim for the rest of the day.

Order of the Day: Kimcha D’Pischa for Poor Families by the Holy Shuvu Banim Community