It’s written in the Gemara, “A Chacham is preferable to a prophet” (Baba Batra 12a).  A prophet sees the disasters before they happen, but he can only warn people.  In contrast to this, the Tzaddik can not only foresee, he can also sweeten and cancel the evil decrees, find merit in the entire Jewish people, and accept everything onto himself.  Why this introduction?  Because we are bringing to you the words of the autistics in their full, and in light of what’s happening around us, their words are harsh.

The words of the autistics are correct, but as is known, there are worlds upon worlds without end, and each one of the autistics talks from the place to which he reaches.  The autistics see what according to the letter of the law needs to happen, G-d forbid, but the true Tzaddik ascends to the supernal root of the matter and sweetens it from a higher place.  Therefore, the Chacham, who is the Tzaddik, is preferable to the prophet.  Likewise, also our Rebbe Rabbi Eliezer Berland shlit”a, requests that we say 7 Tikkun Klalli’s every day.  We also merit to give Pidyon’s, and, of course, to Avodas Hashem in Torah, prayer, and acts of kindness — with this, the Tzaddik ascends above to all the Heavenly Courts, and sweetens the evil decrees at their source — in this way, he brings the Redemption in the way of mercy.

We bring here the latest words of Binyamin from 23 Cheshvan 5781:

“People of Israel: there’s no time.  Mashiach is already here, and he is working to help all the Jews.  He is here in Jerusalem, the capital city.  He is lying sick in the hospital and the wicked people aren’t giving him rest, are trying to finish him off, G-d forbid.

“They arrested Rav Berland with no evidence at all, as if he did something against the law.  And they didn’t take him gently, rather they pounced upon him, even though he didn’t resist.  In Shacharis while he was praying, they grabbed him and threw him to the floor, even though he is an elderly Jew of 84-years-old — a Jew who suffers gangrene is his leg, with heart problems, with one kidney, who didn’t resist them.  But they received instructions, to act as if he was resisting, to punish him, and perhaps they also thought that this would kill him.

From then on, they are transferring him from prison to prison, and he is very ill, and suffers greatly.  He is the Tzaddik of the generation and this annoys the wicked people, because they don’t succeed in killing him.  As much as they tried in the hospital to kill him — it didn’t work out for them.  They sent him immediately to prison after a four hour heart surgery.  Baruch Hashem, the doctor in the prison said that he couldn’t take responsibility for a person in very bad physical condition; they returned him to the hospital.

“In the hospital, they are also punishing him, but he isn’t afraid, because he knows who he is.  He knows that Hashem is with him, and he knows that it doesn’t matter what the wicked people do; they can’t harm him.

“The community of ‘Shuvu Banim’ are really waiting for him with powerful longing and with the feeling of orphans.  Because he is our hope, which Hashem sent to us, the People of Israel, and this should give to every Jew the strength to pray all the more powerfully — that there will be a complete healing for Eliezer ben Etiya.

“People of Israel: The world is chaotic, violent, and terrifying.  Also the State of Israel is in this situation.  The only thing which can save us, the People of Israel, is that we do complete Teshuva (repentance), that we draw very close to Hashem.  That we pray for our Rav (Rav Eliezer Berland ben Etiya), who so worries for us day and night and prays for the people of Israel with tears.

“Our Rabbi who cries together with us over our personal state, of each one separately, and on our general difficult state.  The government knows that he is dangerous to them, that they can’t kill him and that they can’t arrest him, but they nevertheless are trying with all their power to make him disappear from the world, G-d forbid.

“We, all of those who truly believe in the greatness of Rav Berland and pray for him with all [our] strength…these [people] will pull through easily.

“And the world is quaking.  The world is in great danger.  The safest place in this world is Jerusalem, the Holy City.  And today, the holiest place — outside of the Kotel and the graves of Tzaddikim such as Rachel Imeinu, and those Tzaddikim who are buried in all types of places in Jerusalem, such as Shmuel HaNavi, Shimon HaTzaddik, etc — is the Hahoma HaShlishit, where Rav Berland lives.  And when he returns home we will feel the holy spiritual light which will come out of there and illuminate all of Jerusalem, and in the end, all of the Land of Israel, and even past the Land of Israel, to the exile. 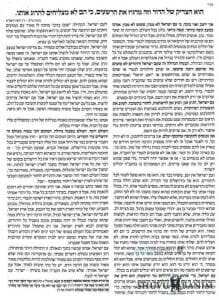 The Stress in Israel and the World is Getting Stronger — Who Will Put the Crown on Mashiach?