The Moshiach will Come from Meron

Behind the scenes, Shuvu Banim has been working for weeks to arrange the yeshiva’s celebration taking place at Rabbi Shimon bar Yochai’s hilloula at his tomb in Meron.

A million shekels has been spent on the occasion, in preparation for Rabbi Eliezer Berland, shlita, being given the honor of lighting the main bonfire at Meron, which is due to happen around 3.30am, in the early morning of the 33rd day of the Omer, L’ag B’Omer, 5779 (May 23rd, 2019).

But the physical preparations to make the site ready for the hundreds of thousands of people who will flock to Meron this year are only a part of the excitement. Spiritually, there is a great deal more we need to be preparing ourselves for, this year in Meron. 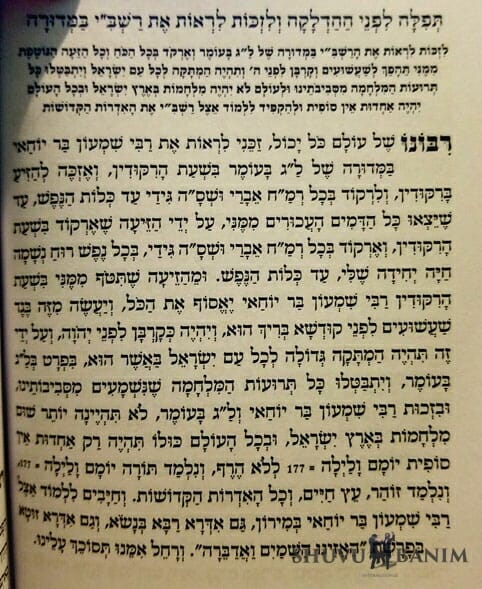 Rabbi Berland recently issued the following prayer, to be said ahead of the hilloula:

Master of the world, the Almighty, please give me merit to see Rebbe Shimon bar Yochai at the bonfire of Lag B’omer during the dancing.

And may I dance with all my 248 limbs and 365 sinews, with my nefesh, ruach, neshama, chaya, and yechida (5 levels of soul), until my last strength. And Rebbe Shimon bar Yochai will gather the sweat that drips from me during the dancing, and with it he will create a pleasurable garment before Hakadosh Boruch Hu that will be considered a sacrifice before Hashem. And through that there will be a huge mitigation for all of Am Yisrael whoever they are.

And especially on Lag B’omer all the trumpets of war that are heard around us will be cancelled. In the merit of Rebbe Shimon bar Yochai and Lag B’omer, may there be no more wars in Eretz Yisrael.

And in the entire world there will only be endless infinite unity day and night non-stop. And may we learn torah day and night, Zohar, Eitz Chaim, and all the holy Idros. We are obligated to learn by Rebbe Shimon Bar Yochai in Meron, the Idra Rabbah in parashas Naso and the Idra Zuta in parshas Ha’azinu Hashomayim V’adabeira “Listen Heavens and I will Speak.” Our mother Rochel will cast her shade over us, to protect us.

Paying for the pilgrims brings brachot

There is a long-held tradition in Meron that anyone who gives tzedaka to help celebrate the hilloula of Rabbi Shimon Bar Yochai, particularly in connection to providing the pilgrims arriving at Meron with their needs, will see wondrous blessings. This year, 5779, Rabbi Berland elaborated on the spiritual greatness of this custom, and said: 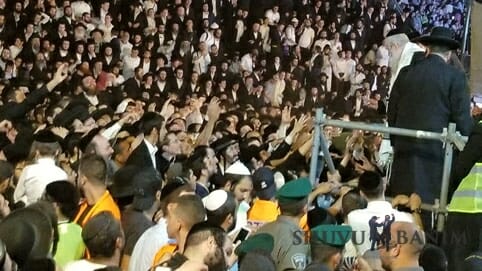 “[This is particularly true] of the hilloula this year, when Moshiach needs to come, because he is only going to come via Meron.

“It’s written in the Zohar (Parshat Shemot) that Moshiach is going to come from the Galilee – this is Rabbi Shimon, in Meron.

“From there, they will go to Mount Nebo, and the cave will split open. Then they will see an ayala (a deer) walking on the mountain, as it’s written in the Zohar (Parshat Balak). Then Moshe will join together with the Melech Moshiach, and they will follow after the deer.

“Withdraw your voice from weeping, and your eyes from tears, because there is a reward for your travail.”[1]

“There is a reward for Rachel’s efforts, because by way of her tears, she will bring the Melech Moshiach, because only Rachel can split the rock. “We will see wonders as the day when we left the land of Egypt.”[2]

So, everyone will see wonders, how the sea will split for the 12 tribes anew.

“All the nations of the world will come to fight against Israel. “And on that day, a blast on the Great Shofar will be blown.”[3]

“We are standing before that great moment, when the great shofar will be blown.

“We are standing before the most dramatic moment ever, the moment when: “And it will be on that day, the great shofar will be sounded, and those lost in the land of Assyria and those exiled in the land of Egypt shall come to Hashem, at the holy mountain in Jerusalem.”[4]

“The geula shleima (complete redemption) will come via this L’ag B’omer, and we will see how the sea will split anew, for Pharoah was the only one who made teshuva.

Prayer to be healthy without chemotherapy