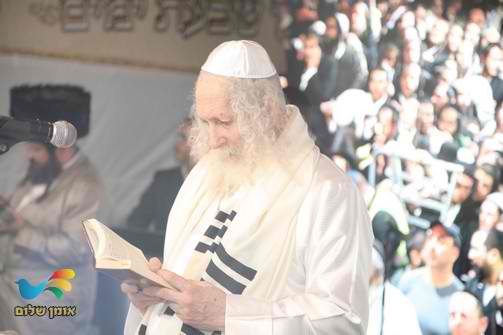 Rav Berland shlit”a wrote this prayer from his hospital bed with tremendous self sacrifice and said that this prayer should be said three times before the Molad (birth of the new moon), which takes place Wednesday, at 5:14 pm and 3 chalakim (approximately 11 seconds).

“In the fortieth year, on the eleventh month [Shevat], on the first of the month, Moshe began to explain this Torah” – in 70 languages.  Because on Rosh Chodesh Shevat all the Chambers of song and melody are opened, and all the flowers, grasses, and trees begin to say songs and to chant melodies.  Rabbeinu says that he who goes to the field in the month of Shevat at the time of blossoming can hear the melody of all the flowers, grasses, and trees.  When a person prays in the field in the month of Shevat, it’s as if he prayed with the congregation, because then the 50th gate is opened, which is the mystery of the Leviathan, that the Kadosh Baruch Hu will make a Succah from the skin of the Leviathan for all the Tzaddikim, as is written, “Can you pull the Leviathan with a hook, or embed a rope in his tongue?  Can you fill succahs with his skin, or make his head into a fisherman’s canopy (Tzitzal)?”  (Iyov 40: 25-31).  These verses speak only about the Leviathan, “Can you embed a rope in his tongue, put a curved hook in his nose, pierce his cheek with a barbed hook?  Will he multiply supplications to you, will he speak softly to you?  Will he forge a covenant with you, will you take him as an eternal slave?  Will you play with him like a bird, tie him up for your maidens (Na’ARos)  (days of youth — yemei haNeORim).  Can conjurers make a feast of him, divide him up between merchants?  Can you fill succahs with his skin, or make his head into a fisherman’s canopy?”  Hashem will make for Tzaddikim belts from the Tzil’tzal of the Leviathan and the rest that remains from the skin of the Leviathan he will spread over the walls of Jerusalem, and this will radiate from one end of the world to the other.  There will be a great light when Mashiach comes and it will not be day or night.  We pray that in the Molad of the month of Shevat, Hashem will spread the skin of the Leviathan over the walls of Jerusalem, and the light will go from one end of the world to the other, as is written, “And nations will walk by your light, and kings by the glow of your brightness” (Yeshayahu 60:3).  The month of Shevat is the month of Redemption, the song and the melody, because then the 50th gate is revealed.  Then Moshe explained the entire Torah to all of Israel, and every verse he translated into 70 languages, and all the kings, and all the nations heard the translation, as is written, “All the kings of the earth shall thank You Hashem, because they heard the pronouncement of Your mouth.”  All the gentiles will come to convert in the future, and a family which doesn’t come to convert won’t have rain upon them; they will have a drought, as is written, “Thus said Hashem Tzeva’os: In those days it will happen that ten men from all the languages of the nations will grasp, will grasp the corner of the garment of a Jewish man, saying, ‘We will go with you, because we heard that God is with you’” (Zecariyah 8:23).  Therefore, one needs to go with Tzitzis, because the gentiles will come and grasp the corner of his Tzitzis.  And then all the Tzaddikim and Tzaddikos will have a height of 200 amos, as is written, “And I will walk you upright (KOM’miuS)” – two stories (KOMoS) of the Chamber of the Temple, which was a height of 100 amos.  And regarding the month of Shevat, it is written, “You who sits in the gardens, friends listen to your voice; let me hear it.”  To each person there will be thirteen canopies: Gems of Shoham, gems of Barekes, gems of Yashfeh, gems of Nofech, gems of Sapir, gems of Yahalom, gems of Leshem, Shevo, and Achlama, gold and silver.  From them the Kadosh Baruch Hu will make thirteen canopies for all the Tzaddikim and Tzaddikos who will remain when Mashiach comes.  Because the Kadosh Baruch Hu will renew in the month of Shevat the Jewish people, only the Jewish people, only those who will nullify themselves to the King Mashiach – 7,000 souls who didn’t bow down to Ba’al in the war of Achav, that only 7,000 men were saved from the kingdom of Aram.  The month of Shevat is the time of the revelation of Mashiach, because this is sixty days before the first of Nissan, that then Mashiach ben David will be born.  And then there will be the terrible war with Gog and Magog, which at the head of it will stand the wicked Armilus, who Mashiach ben Yosef will kill, but he is also in danger of falling slain.  Therefore, it’s written in Tehilim, “He asked life from You; You gave him length of days forever and ever.”

Prayer for the Molad (Birth of the new moon) of Sivan

A prayer in every home

Prayer for the new month of Kislev, 5779