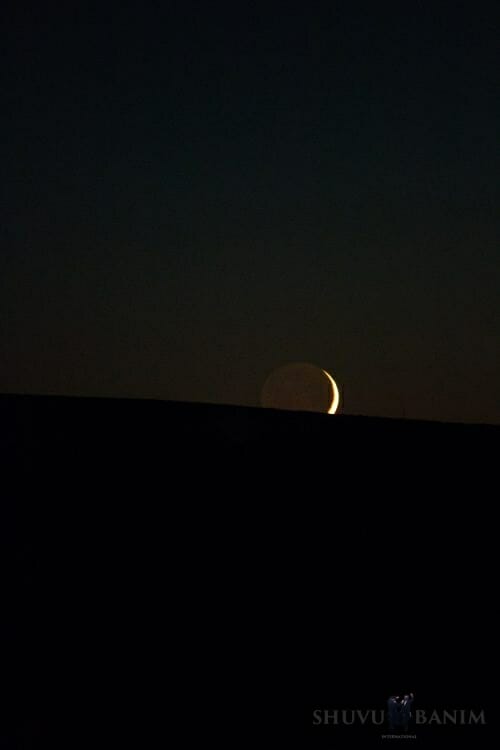 To merit during the time of the “molad,” that all of our requests will be received with mercy. And we should merit to the crown of the King Messiah and to give thanks and praise G-d every moment and every second

All of the creation is subjugated to the True Tzadik

A prayer for the “molad” of the month of Teives, Thursday night, 7:41 and eight parts (chalakim). That then, all of the gates of the heavens and of the Holy Temple are opened. The fifth candle of Chanukah which represents Shelumiel the son of Tzurishadai of the tribe of Shimon, who repented and stood at the head of Mount Gerizim

Master of the world, all powerful, that Your plan will not become diminished, grant me the merit to the honor of the “molad” of the month of Teives, that it will be on Thursday night, 7:41 and eight “parts (chalakim)”.

That then, all of the fifty gates of the heavens and the gates of understanding are opened.

And Queen Esther, that she is the Divine Presence enters the courtyard of the king, to the house of Achashveirush. That this alludes to the unification of the holy Divine Presence with the Holy One Blessed be He.

Please G-d, grant me the merit in the month of Teives, which is alluded to in the verse, “Let blessings of good come before him, place upon his head a crown of fine gold,” that we shall merit to the crown of the King Messiah, that is given to him from the dove of Noah.

And we should merit, all of us, to this crown, that it is the crown of the redemption.

That on it, it is said, “A woman of valor, the crown of her husband.” Just like we merited to the festival of Chanukah, the festival of thanks, the festival of redemption, the festival of miracles and wonders. That then, G-d fills all of the requests of our heart for good. And we then read about the dreams of Yosef. And that the stalks stood and bowed down to Yosef’s stalk.

“And behold the sun, the moon, and eleven stars are bowing down to Yosef.”

That he is the ruler of all of the zodiacs of the heavens, and he guides their paths. And to him, all of them bow down and give thanks. And all of them heed his intention and to his word forever, eternally, eternal.

#5044 Prayer to guard the mouth and bring blessing

#5048 Prayer to not swerve from Hashem for even a moment

Prayer to heal the sores on the head

Prayer to heal the skin

Prayer to be strong and have no weakness

Prayer for a man’s hair to not fall out