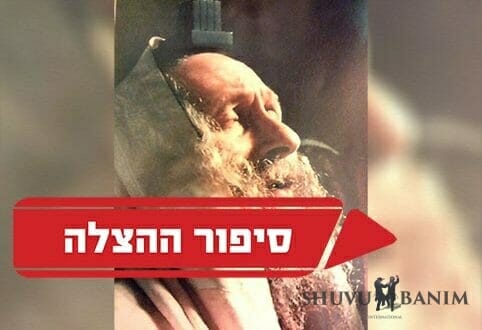 “Shalom, my name is Daniel H.  I’m 34, live in Hadera, and I want to share and give strength with the amazing story that happened to me.

“He relates that suddenly he heard the voice of Rabbi Berland said to him, ‘Be strong.  Don’t break.  I’m with you.’  He told me that this mamash strengthened him, and I, from the time that I heard from him about this, began to turn to Rabbi Berland during hard times…

“One day, I was in a shiur of one of the Tzaddikim in the synagogue in my city of residence, Hadera.  One of the participants of the shiur had an evil spirit inside of him, and he mamash went through an attack in front of everyone.

“We all approached him in order to help him, and we waited with him until his father arrived and took him.  After the shiur we prayed Mincha.  In the midst of praying the Amida, I see mamash in front from of me, in a way that’s hard to describe, Rabbi Berland shlit”a.  The Rav shouted at me, ‘Get out!! Get out!! Get out!!’

“I thought that the Rav meant that I needed to leave the synagogue…  After the prayer I told a friend with an awareness of holy matters about what happened to me.  He told me, ‘Rabbi Berland knows that you’re in the Shemoneh Esrei prayer and need to concentrate on the prayer.  He didn’t speak to you.  Rather, he shouted at something which tried to attack you and told it to go out and leave you alone’

“Before the friend enlightened me with his words on the incident in the Shemoneh Esrei, I forgot and didn’t connect it to the fact that before the prayer I came up close to help the young man with the evil spirit…  But after the words of the friend, I understood suddenly from what Rabbi Berland saved me.

“In sharing the story, I want to pass on thanks to Rabbi Berland shlit”a, the Gadol HaDor!  I thank him for helping me with this, baruch Hashem, that nothing could harm me.

“I wish [us] that now we should merit to see him in person.  Hashem should protect you!”