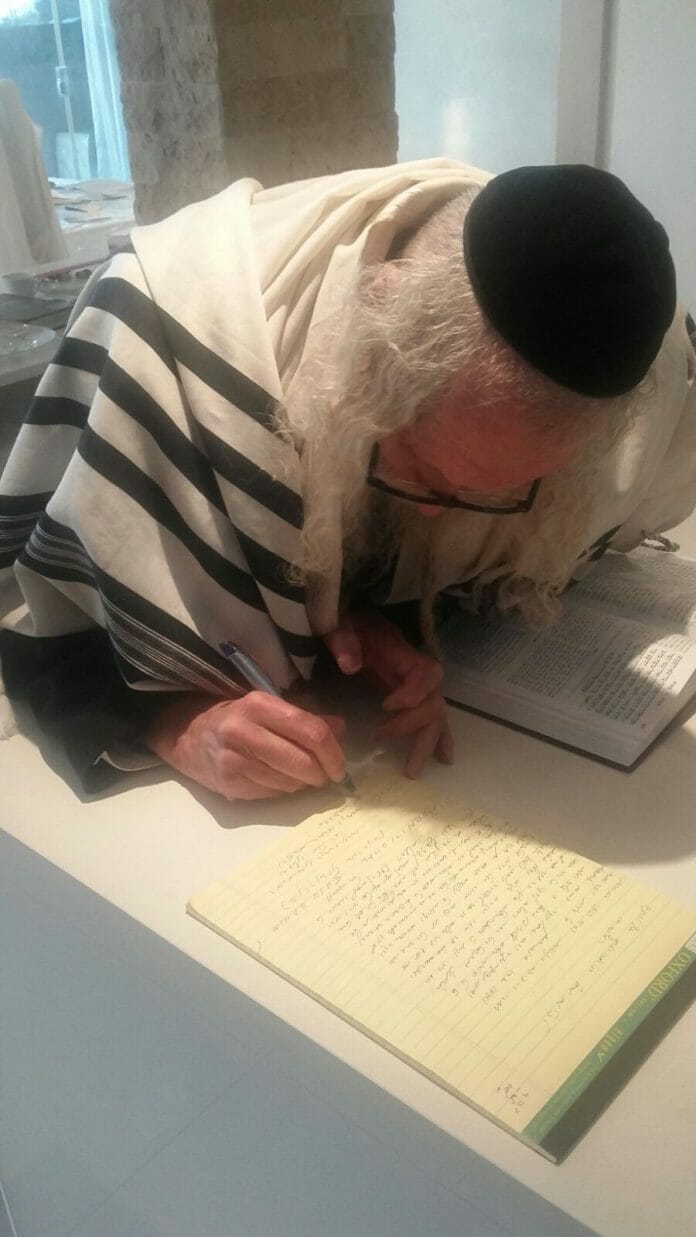 Translated from the hebrew ‘Knishta Chada’ newsletter issue number 44 (EMERGENCY EDITION, DUE TO THE THIRD INTIFADA)

Rav Berland’s prophecy about the Intifada

Nine months ago, the Knishta Chada newsletter (editions 39–40) publicized a message that Rav Berland sent out to all of Am Yisrael. In that message, the Rav called upon on all of Am Yisrael to stop the new Intifada. He wrote then: “We are in a new Intifada, and it’s a terrible Intifada that will spread around the globe. It’s impossible to stop it [by natural means].” (read it here in english)

The Rav then quoted a passage from the Rambam in his work called Hilchot Yesodei HaTorah, (The fundamental laws of the Torah 7:7), which says the following: Anyone who goes in the way of Torah, (ie, they are genuinely God-fearing Torah scholar), and who says that they have received a prophecy, we are obligated to believe him, in the same way that we would believe two witnesses.  The Rav continued: “This is a vision of the end of days. Yaacov Avinu (the patriarch Jacob) was afraid to reveal what was going to happen in the end of days.”

Nine months ago, the Rav then went on to describe the new Intifida. He said that: “The whole world is behind this Intifada, and is encouraging it and urging it on – every single country in the world. The international community will applaud every additional Jew that is murdered and killed.  Everyone is cursing Hitler, and upset that he didn’t ‘finish the job’. So now, they’re relying on the Ishmaelite’s [to do it for them]. As the verse says: “And Esav went and took Mahalat the daughter of Ishmael” (bereishit 28:9).

Self-sacrifice is required to overturn the harsh decrees

The Rav also said in that same publicized message 9 months ago that every single Jew has to be prepared to sacrifice themselves for the sake of Kiddush Hashem (sanctifying God’s greatness) – but that the true mesirat nefesh, or self-sacrifice, required was in the area of guarding the eyes. Rav Berland said: “If a man guards his eyes, this is true mesirat nefesh. If a man guards his eyes, then there will be sweetening, because all of the harsh decrees on Am Yisrael are only brought about by lack of guarding the eyes. Every time a man opens his eyes (looks at forbidden things), another Jew is stabbed, another Jew is killed.”

At the time of the Purim miracle about 2500 years’ ago, Mordechai the Tzaddik went out to the streets of the city, tore his clothes and cried out that Am Yisrael was facing a decree of utter destruction.  Most of the Jews of that time ignored him. It was only after nine years, when the decrees of Haman began to materialize, that the Jewish community saw that Mordechai was right. Rebbe Nachman of Breslev says that the true tzaddik sees the world through a clear looking-glass, and that he sees all of the decrees before they are decreed, and that he undertakes much suffering upon himself and shows great mesirat nefesh (self-sacrifice) in order to wake the Jewish nation up, and prevent their blood from being spilt.

But unfortunately, we don’t listen to him.

How we can stop the third Intifada: Pidyon Nefesh

In that same message nine months ago the Rav set out a clear path for how Am Yisrael could prevent the current Intifada, so that it wouldn’t materialize. At that time, he sent out a message saying that: “All of Am Yisrael must join together now. There is going to be another Intifada and every Jew is in danger. Everyone is obligated to give a pidyon nefesh (redemption of the soul) from $10 upwards, every Jew without exception. One person can give $10, another $60, and someone else $100, until we reach $600,000 (which is a single dollar for each of the 600,000 soul roots for the people of Israel). Every Jew, everyone without exception, should ‘raise up an offering’ and give at least $10 as a pidyon, until we reach $600,000, and through this we will sweeten the new Intifada, and we will merit the complete geula (redemption) speedily in our days, amen.’

The Rav made a lot of effort to try to wake Am Yisrael up at that time, and we reached a sum of about $90k – nowhere near what was required in order to sweeten the harsh judgments hanging over the 600,000 souls of Israel. Then the Festival of Sukkot 5776 arrived, and with it came the beginning of the prophesized Intifada; when the shootings, stabbings and other attacks began in Eretz Yisrael everyone saw that the prophecy of the Rav had indeed materialized, and the Knishta Hada hotline suddenly got a lot of calls. People now remembered what the Rav had said nine months ago, and wanted to give the pidyon money to save Am Yisrael. But the way you can sweeten a judgment before the decree is finalized and goes out into the world is different from how you can sweeten it once it’s already materialized.

Given that we are now ‘after the decree’, the Rav wrote an additional letter that explained that the way to stop the Intifada is now through the verse: “Kol haktoov le hayim be yerushalayim” (lit: ‘all who are written for life in Jerusalem’). Rav Berland explained that now, the way to ‘give life’ to the residents of Jerusalem and Eretz Yisrael is by donating an amount that is equal to the words ‘to life’, leychayim, which equals 98 NIS, in addition to praying for them, that nothing bad should happen to them.

The language that Chazal use to describe money, is damim, which literally means ‘blood’. When there are harsh decrees hanging over Am Yisrael, they can only be sweetened by immense amounts of mesirat nefesh, or self-sacrifice from the Jewish people, which often entails the spilling of blood.

But there is another way of sweetening the decrees.

Instead of spilling of blood literally, God forbid, it’s also possible to fulfill the requirement to ‘spill blood’ by the self-sacrifice required in giving money, or damim. If you give whatever amount you’re able to give, with mesirat nefesh, then you fulfil the verse that states: ‘charity saves from death’ (Proverbs 10:2, 11:4). A pidyon nefesh like the one described above, where each person gives a fixed amount, is called pidyon hakollel, or ‘communal redemption’, and this sweetens all of the judgments that are currently hanging over the nation of Israel, which means we won’t see any more blood spilt in our country. May we only hear good news, Amen.

For the benefit of the public, below you can find an English translation of the full text of the recent letter that Rav Berland wrote on Cheshvan 1 5776 (October 14, 2015): 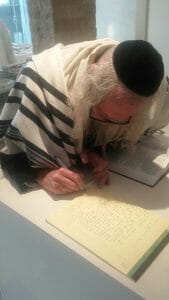 To all of Am Yisrael, in every place, shalom u’vracha (peace and blessings), God is with you, that you should live.

I’m writing this after the terrible murders that occurred on the first days of Succot, with the assistance of the European Union and its supporters, and that are continuing even now, and which haven’t stopped for even a moment. All the nations of the world, without exception, are rejoicing over the fact that the blood of Israel is being spilt like water. The Angel of Death has risen up and is beckoning to us through the window, and is now spreading to all parts of the world, [ready] to stab all Jews simply because they are Jews. All of the nations of the world are rising up against us here, ‘with one voice’, in order that the name of Israel will be forgotten from the world.

‘Moav and HaGarim, Edom and Amalek, the Philistines, the dwellers of Tzur’ (Tehillim 83:6), they are all coming ‘with one voice’, to destroy, kill, and annihilate Jewish men, women and children in one day (Esther 3:13). Each day, our suffering is greater than the day before, and every moment we hear and read about new casualties.  And there is no one to speak up for us! In fact, just the opposite, with every nation rushing to blame Am Yisrael [for the situation], saying that we’re worse than the Nazis.

The first priority of every nation of the world is to extinguish the seed of Israel from the face of the earth. Today, there is no Jew who can be certain of his life, not in Eretz Israel, and not in any other country, either.

[Just as they are coming against us ‘with one voice’] we also need to act ‘with one voice’, and every Jew, wherever they live in the world, needs to donate 98 NIS to fulfill the verse ‘kol hakatoov lechayim be yerushalayim’ [explained in detail above]. They should send their communal redemption to [details below] which will be distributed among orphans, widows, and poor families of Israel).

(Every head of the family should donate 98 NIS which is for the protection of the entire family, each month as long as the killing continues. The gematria of 98 = ‘one voice’, and also equals lechayim, ‘to life’. The 98 NIS is also to balance the 98 curses found in the Torah, and will sweeten the judgments hanging over Am Yisrael.)

You can give your ‘communal redemption’ for you and your family in the following ways: