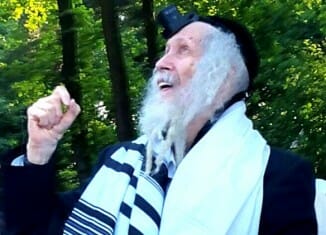 The following statement was given over by the grandson of Rav Yitzhak Dovid Grossman in the “meor hashabbat” phone line:

“What’s going on right now is not at all a simple matter. The very ground is shaking under our feet, because of the terrible situation that’s going on with Rav Eliezer ben Ettia Berland, shlita. It’s such an awful situation it feels more like a daydream then reality, that something like this could be occurring, where they’ve taken a Tzaddik against his will and are humiliating him in this way.

“He is being handcuffed and kept in prison while they continue to make all sorts of allegations against him that never happened and never occurred. Anyone that has even a tiny bit of understanding, and anyone that’s connected to our teacher, Rav Grossman, can know and understand that the accusations aren’t even the tiniest bit related to a Tzaddik and awesomely holy man like Rav Eliezer Berland.

“Down through the years, everyone has always remarked how this Tzaddik [Rav Berland] doesn’t seem to be connected to matters of this world. This man has no worldly desires, and he’s continuing to rise higher and higher above this mundane world with each day that passes, and to stand up in tests that no other Tzaddik has had to endure for many, many decades already.

“He’s been imprisoned, hounded from one country to the next, persecuted so badly that he hasn’t had even a minute where he’s been able to relax and to recover from his experiences. He hasn’t had a minute, where he’s been able just to relax and learn some Torah. Anyone that knows the Rav [Rav Berland] knows that each second, he is attached in *dveikut* to Hashem’s holy name… Every second, you can see him attached to the Shechina with all of his might. Each second, he’s either praying, or studying, so let’s take a few seconds to give you just a small taste of his *avodat Hashem*.

“When he left the prison in South Africa, his captors had to take literally hundreds of books out of his cell. All he asked for when he was incarcerated was books – even when he didn’t have food to eat, and his daily living conditions were very difficult. At that time, Rav Grossman told one of his grandsons that the world was founded in foolishness, but that Rav Berland he was founded on the letters of the Torah and prayer. [In the Hebrew this is a play on words involving the Hebrew phrase for a jail term.]

“It’s written in the Zohar, in Parshat Pinchas, that when it gets too difficult for the generation to endure the hardships that they actually deserve, the Tzaddik suffers in their place. So I’m asking myself, how can it be that we haven’t realized just how bad the judgments on Am Yisrael have to be, for such a Tzaddik to be experiencing such terrible things? Maybe, it’s because of the internet? Rav Berland himself has spoken a great deal about the incredibly destructive effect of the internet, and that demonic forces are being created from all the spiritual blemishes associated with it, so it could well be that the internet is the cause of all this.

“We need to make a lot of Teshuva, and to flip the world back to being a place of peace. And the main thing is to not let people speak [lashon hara – evil speech] – because that is simply piling sin on top of sin. Exactly the same people who are being sustained [spiritually] by this Tzaddik are the ones who are talking against him. *Chas v’shalom* (God forbid), that we shouldn’t end up weeping over all this stupidity, and that we should instead understand and remember that the Tzaddik is sustaining us, and redeeming us from our sins.

“How’s it possible to believe all these stories about the Tzaddik that are being put around by criminals and sinners? By people who have sold him out for money? They took the Rav from *shiur *to *shiur*, and then charged people thousands of dollars just to speak to him. And these are the same people that we’re now meant to believe, when they started to bring all these stories out about the Rav?!

“These people are thieves and liars, and they have no connection to holiness. They completely damaged the community, and they kept the Rav under lock and key, and didn’t let him speak to anyone – only what they themselves wanted. And these people are the ones you’re going to believe?!

“These wicked people paid tens of thousands of dollars to another complainant, in order for her to agree to lie on their behalf…These people are ‘sinners of Israel *b’gufim’ *[this is a reference from the Gemara about one of the categories of sinners who are so bad, they spend eternity in Gehinnom] – and these people you want to turn into Tzaddikim?!

“From the time of the Gemara, the way of all the Tzaddikim of the generations, up to the students of the Baal Shem Tov, all acted in hard-to-understand ways. Everything [Rav Berland is doing] is according to halacha, and we’re speaking of a Tzaddik who has no connection whatsoever to bad thoughts or *taavot *(worldly desires).

“We need to know that we shouldn’t be stupid, and act like a blind person following a blind person, and to start talking [badly] about a Tzaddik like this.

“How can people believe these lies? [He’s a holy Tzaddik] and they are criminals and sinners who are exploiting his complete nullification to God’s will. [i.e. by not taking steps to silence them, or to defend himself publicly.] They are exploiting this, and they threatened him that if Rav berland doesn’t agree to do what they want him to do, they will spread stories and lies about him.

“How did we fall so low? How are people so unconcerned about saying such terrible things about a Tzaddik like this? The single biggest thing that enrages Hashem is when people talk against His Tzaddikim, because it’s like talking badly to a father about his only son, who is busy sacrificing himself with every second that passes, solely for the sake of Am Yisrael. And this is especially true of Rav Berland, who is sacrificing himself every moment in order to bring Am Yisrael closer to God – without eating, without drinking, and even without sleeping.

“When you’re talking about someone like this, is it *really *possible to claim that he’s made mistakes like this, or erred in the ways of holiness? Remember, this is the person who has made the most effort to teach other people about the importance of *shmirat enayim* (guarding ones eyes) and preventing the blemishes [that occur from untznius behavior].

“This is the person who has spoken out the most about the importance of *kedusha*, holiness, and about committing oneself to Torah, and on the importance of praying at length, with real feeling. All the allegations against him are lies and falsehoods, and they go against all of the rules of logic. This Tzaddik is far from sin, and all he desires is to get closer to Hashem. Even when he was imprisoned, all he did was try to strengthen himself by learning Torah.”

*Hashem should help us to take these words to heart, and that all of Am Yisrael should return to the true path.*

*You can hear the Hebrew recording of this statement on the Shuvu Banim Hebrew website, HERE.*