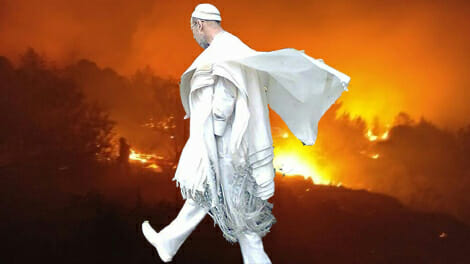 At exactly the same time that Rav Berland’s plea bargain was finalized, as the only way of securing his release from a corrupt court system that was threatening to keep the elderly, unwell Tzaddik in prison indefinitely pending trial, a number of forest fires broke out all over the country. While there were smaller fires in the South of the country and around the Jerusalem and Shomron areas, the worst conflagration was around the Northern city of Zichron Yaacov, where hundreds of people had to be evacuated from their homes, as firefighters tried to contain the blaze. In total 3000 homes were evacuated across Israel in fires which up until the time of the writing of this article are still not completely under control. After the judgment against Rav Berland, shlita, was handed down in Jerusalem’s ‘HaShalom’ Court, the Gaon, Tzaddik and kabbalist Rav Dov Kook from Tiveria, shlita, made the following statement to one of Rav Eliezer Berland’s students: “All the terrible forest fires that are happening now around Zichron Yaacov are because of the persecution and suffering of the holy Tzaddik, Rav Eliezer Berland. The measure of justice is being weighed out primarily against us in the North, and we need to know that the terrible fires that are burning there in a few different places are because Rav Berland is being held in the North, close to Tiveria. “The midrash says that when people persecute and shame Tzaddikim, then *HaKadosh Baruch Hu* brings fires to the world! All the slanderers and people who are speaking libels and falsehoods about this awesome, holy Tzaddik should be aware that soon, judgment will occur, and that there is a Judge *mamash*, who will reveal his [Rav Berland’s] honor and innocence to every eye.” So said Rav Dov Kook.

UPDATE: THURSDAY NOVEMBER 24th FIRES HAVE BROKEN OUT IN OVER 250 LOCATIONS. ONLY ABOUT 5 PERCENT WERE ARSON RELATED.  80,000 PEOPLE WERE EVACUATED FROM THIER HOMES.

Watch Rav Berland being escorted out of the courthouse yesterday through Jaffa Street.