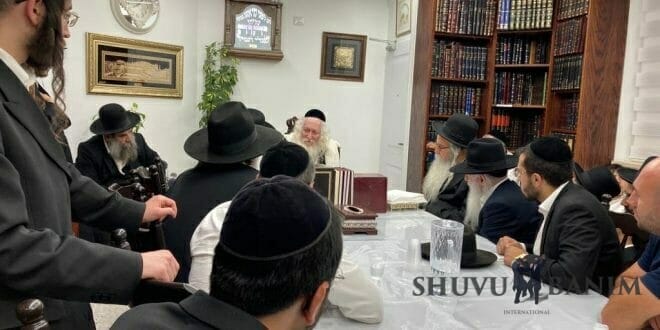 Over thirty God-fearing kollel students, from the cream of the crop of the city Zikhron Ya’akov, merited to draw close to the “light of lights” of Rebbe Nachman of Breslov zy”a and the unique path of our Rebbe Rav Eliezer Berland shlit”a.

They began to draw close about two years ago.  Then, in the nearby city of Or Akiva, Rav Shlomo Elmeliach shlit”a, a long-standing student of Rav Berland, began to teach a shiur in Kabbalah in the book Etz Chaim.  In the shiur on Kabbalah, Rav Elmeliach would often speak about the Torah and interpretations of Rav Berland shlit”a — as is known to all the vast and encompassing knowledge of Rav Berland in the hidden secrets of the Kabbalah.

The group of kollel students, who began to hear a bit of the words and insights of Rav Berland shlit”a, sought with thirst to receive more from the flowing stream, and so merited to draw closer and closer.  Meanwhile, the main story last year was when the Rav shlit”a came to stay in the city of Zikhron Ya’akov – as one of the kollel students, among the important Torah sages of the city, said, “There’s no doubt that [the fact] that our Rebbe the Rav came to the city gave a serious push to the entire subject of drawing closer instantaneously.”

The kollel students merited to enter into the inner sanctum for a special shiur by Rav Berland shlit”a.  In the shiur, which lasted for nearly an hour, the Rav shlit”a gave insights into the weekly Torah portion “Shelach-Lecha” and other subjects, while seasoning his holy words with secrets of the holy Torah.