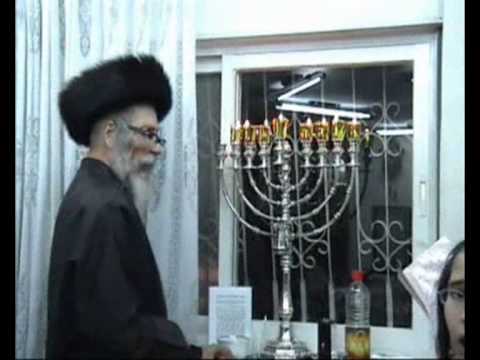 The Holiness of Chanukah

On Hanukkah, a fire is burning, a flaming fire of love for Hashem which cannot be stopped. It is a fiery blaze that comes down from Heaven through the Hanukah lights. Rabbeinu brings in Torah 249, “Suddenly a person is enclothed in the spirit of gevurah” and then he can do acts of strength because, “the essence of gevurah is in the heart.” A person whose heart is strong is not afraid of anyone in the world—he has no fear. Nothing exists for him at all except “Ein Od Milvado – Nothing exists but Him”—only Hashem. This spirit can be accessed on Hanukkah just like Chana merited this “Hanukkah”חנוכה , which has the letters of “כו חנה”  (gematria 26, which is the gematria of the Shem Havayeh). The meaning is that Chana was completely dedicated to Hashem. And this is as it is written, that “Chana prayed על Hashem.” She saw only Hashem. She was attached completely to Hashem. Therefore, all of Hanukkah is drawn from Chana. Rebbe Nosson writes in Likutei Halachos, Choshen Mishpat, that all of Hanukkah comes from the light of Chana, from the neshama of Chana. She never stopped praying or fell from her level of emunah. She didn’t let go of her faith for anything in the world. From the age of ten, she started praying that she would merit having a son who was a tzaddik, and at the age 130 she received her reward. For 120 years she prayed constantly to Hashem and succeeded in bringing down the soul of Shmuel, who was on par with Moshe and Aharon.  Shmuel anointed both Shaul and David. The most important was David who is Moshiach, as it is written, “I set up a candle for my savior,” which is the light of Hanukkah. When a person decides to have mesirus nefesh for Hashem Yisborach, he receives the spirit of might and strength, and through this spirit, he can wage great wars and achieve victory over all the evildoers, over all those who have adopted Greek culture, and bring the Geulah, just as Chana merited through the light of Hanukkah to bring down the soul of Moshiach.  חנוכה is “כו חנה” because Chana had mesirus nefesh for Hashem Yisborach and did everything only for Hashem. She begged for a son only so that he would serve Hashem. And today, to have mesirus nefesh means to sit and learn! It is not waging war with anyone. It is simply to sit and learn and to put one’s head in the holy Torah, in the holy Gemara.