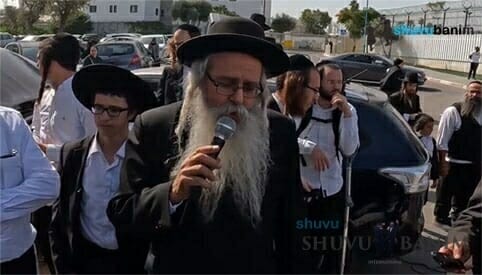 “Shalom to all of our people, bezrat Hashem, we are happy and thankful to Hashem Yitbarach for the release of our Rebbe Rav Berland shlit”a from prison after a battle of two years.  We’ve gone through very difficult wandering, and what we’ve gone through is nothing compared to what the Rav shlit”a went through.  The Rav went through very difficult wandering from hospitals to prisons – a very complicated battle that lasted two years, and baruch Hashem that we’ve merited.

“And who would have believed that we would merit to such Torah activity of the Rav shlit”a, only Torah.  Shiurim of the Rav in his home to all our people from around Israel.  This week [people] from Holon, Bat Yam, Rishon Letzion came to the Rav’s home for shiurim.  There were already [people] from Eilat, all the Kollels that are in Jerusalem – special shiurim and baruch Hashem prayers, Seudat Shlishit with the Rav, the Shacharit and Ma’ariv prayers.

“No one would have believed it possible that such influences would reach [us] which the Rav bestows upon the community now.  Wonder of wonders and unbelievable is the phenomenal organization in the house of the Rav – each person with his role, but there are a few people who stand behind the door.  We don’t see them at all in the house of the Rav, but they carry upon themselves the entire financial burden, a very heavy burden.

“I can tell you only what the Rav said about this staff which is involved now in the expenses, in building the tent outside.  Our people stand now outside in cold and rain.  Fortunate our Israel that they sweeten judgements through this, but we need here a bit of worldliness.  We still haven’t reached such a spiritual level of standing in snow, cold, and rain.

“We have here the expenses for the continuation of the activities of the Rav shlit”a.  We need to worry already about tents.  Rav Ofer Erez already said several times that people want to put money into the hands of the Rav, but Rav Ofer Erez said several times that when giving this to the people involved, it’s accounted as if they gave a Pidyon to the Tzaddik.  This is Pidyon Shevuyim (redeeming captives), however, [people can’t] give this to the Rav…

“I met a Kollel student from Bnei Brak who requested to give a Pidyon to the Tzaddik.  I told him, ‘The Rav doesn’t take any more Pidyonot.’  He continued, ‘Fine, I want to give Tzedaka to the Tzaddik.’  I told him that Rav Berland doesn’t take Tzedaka.’  He continued, saying, ‘But I want the Rav to be a partner here.’  I answered him, ‘We’re sorry, but this is the procedure now, because it’s impossible from a legal and juridical standpoint to give directly to the Rav.

“People need to understand that also if they give to the fund for the expenses and to those who stand behind them, this is as if they gave Tzedaka to the Tzaddik.  Behold, the people who are standing behind the scenes are trusted by us 100%.  They sacrificed themselves, mortgaged their homes for the release of the Rav.  They devoted themselves day and night.  Therefore, anyone who has Tzedaka, today this goes to the fund of the Community Rabbinical Council – and this is called mamash a Pidyon.

“There are tremendous expenses, and they are carrying the burden alone.  Therefore the Community Rabbinical Council has decided to carry out a fundraising appeal until Purim, that anyone who is associated with the Rav shlit”a, from Jerusalem and outward, should see to donating 1,000 NIS, each person.”

To donate to the house and Bet Knesset of the Rav click here.

Shiur in Rav Berland’s Home to Group from Harish

Rav Eliyahu Succot Shlit”a: Be a Part of Bringing the Geula