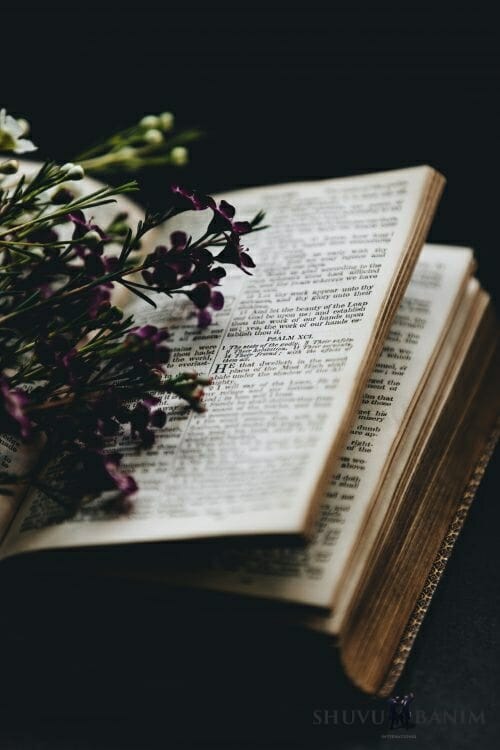 Last Tuesday morning, my husband came back from davening by the Rav’s Beit HaRav on Ido HaNavi Street and told me:

I heard that the Rav has seen another harsh decree, and he’s asking all the women to recite the Book of Tehillim before shvi shel Pesach (the seventh day of Pesach).

I have to be honest:

I groaned a little when I heard this, because like most of the other ladies out there, I spent the whole of April running the ‘Seder’ marathon, and the ‘cleaning the house’ marathon, and the first day I’d put my feet up in weeks was Tuesday.

And now, here was another job to do, to try to read the whole of the Book of Tehillim by Friday night.

I read Hebrew pretty slowly, as it’s not my first language. Typically, it can take me six hours to polish off the whole book of Tehillim, on the rare occasions I’ve attempted it. So then, the inner fight kicked in:

Let someone else say the book of Tehillim, I’m tired.

But the Rav never asks people to do things stam, for nothing. There has to be a good reason for it.

But I’m tired, and it’s going to take up six hours of holiday to say the book of Tehillim by Friday night. I need a break, I need a rest!

But, you know, Rivka, that whenever you put yourself out to do this stuff, the first place you see the benefits is in your own life.

And that brought me up short, because it’s so true.

So, I dusted off my book of Tehillim, and I made a schedule to split it into 4 parts, to be completed by Friday lunchtime – the seventh day of Pesach. With God’s help, I managed it. And then, I started to get a few insights about some things that have been bothering me for ages, and one thing that has been stuck for years started to move in a really big way.

If that’s all that happened, dayenu.

But then, I logged on Sunday morning, and discovered that a psycho with an assault rifle in San Diego had opened fire on a Chabad synagogue in Poway, apparently in some sort of ‘copy cat’ attack of the horrific shootings that occurred in two mosques in Christchurch a few weeks’ ago.

Back in New Zealand, a psycho with an assault rifle entered two mosques, and shot more than 350 people, 50 of whom died at the scene.

And now, this psycho in America had posted a long rant about how he was going to try to do the same thing, lo alenu, in Poway – except….his gun jammed very soon after he started firing. I know he still murdered an innocent Jew* and injured three others, and that every person is a whole world.

But thank God a million times over, that it wasn’t so much worse.

The psycho’s gun jammed, he fled the scene, and then, perhaps most strange of all, he himself called 911 and reported his own crime, then waited for the police to come and arrest him.

Does this make sense?

It seems to be a totally open miracle that nothing worse happened.

As I was pondering all this, I got an email with a link to a news story that was just cleared by the military censor now, about a massive terror attack that Hamas was planning for around Israeli election day.

A would-be suicide bomber had been primed to drive a car bomb into a heavily populated part of the city of Maaleh Adumim, just outside Jerusalem, around election day on April 9th. Instead, he was caught and arrested on March 31st.

Who knows how many other plots and attacks against Jews and Jewish targets – both within and without Israel – are being foiled and sweetened and mitigated all the time? I certainly don’t.

But I know this: Whenever Rav Berland and our other true tzaddikim tell us there are harsh decrees on the horizon, we need to pay attention. And we need to make some effort to try to participate in reciting Tehillim, or attending a prayer gathering in Hevron.

Our enemies are continually regrouping, continually coming up with new terrible ideas to hurt and harm Jews. And as the Rav told us a few months’ ago, prayer is the only real protection we have, at this stage of the game.

Only tehillim stop the tillim – the rockets. And they also stop suicide bombers, and cause assault rifles to inexplicably jam, and who knows what else, really?

But it’s obvious that our true tzaddikim are forseeing things with much clearer eyes.

*May this article be an ilui neshama for Lori Kaye, and a refuah shleima for everyone who was injured in the attack on Poway Chabad: Yisroel ben Chana Priva—who lost his index finger while being shot at from almost point-blank range; 8-year-old Noya bat Eden (Dahan) and her uncle, Almog ben Ruti.