Now, the Rav has made another urgent, new plea for as many people as possible to join the gathering on Sunday night, the 8th day of Chanuka. Here are his holy words:

“The Rav is announcing here that there is a prayer gathering to awaken people, in Hevron, after the 8th candle. Everyone should first light their candles, and then afterwards, everyone should travel to Hevron, at midnight, 24:00, until 2:30 am. [There], they should finish the book of Tehillim by the Mearat HaMachpela. And then afterwards, they should say the Tikkun HaKlali, then return to Jerusalem.”

“The Rav is asking everyone to please come to the prayer gathering, because this thing is extremely important to me. The Rav is currently in life-threatening danger, so everyone has an obligation to come to the gathering, without any exceptions. From all the classes, from all the different groups of people, chilonim, religious people, kipot srugot (knitted kippas, i.e. National Religious), black kippas – it doesn’t matter how they dress.

“Everyone is obliged to come to the gathering that is taking place for the hatzlacha (success) of Am Yisrael, and in order to prevent a new intifada. That they shouldn’t fire more rockets at the South, or at the North, and that no more Jews should be injured, until Moshiach ben David will come and rectify everything.”

The decree was postponed for six years

Recently, Rav Berland, shlita, has been speaking a great deal about a very harsh judgment that is hanging over Am Yisrael. The Rav also added that if we don’t manage to get this decree cancelled, he will have to take the whole judgment upon himself again, and that it will be very, very hard. Much harder than anything else the Tzaddik has taken upon himself up until now.

The Rav, shlita, has managed to postpone the judgment for six years, in order that there would be an additional six years of life with the Tzaddik, and six more years of prayers and Torah learning.

Now, we are at the most critical juncture for the nation of Israel.

So, everyone has to come to the gathering, without any exception.

The Rav has stressed in his conversations that the main point of the gathering is to stop a war from breaking out in Israel’s south, and also in Israel’s north. Until very recently, the North has been relatively quiet, but just today (December 4th, 2018), the IDF began a critical operation in the North, to blow up tunnels being dug into Israel by the Hezbollah.

So now, the Rav’s prophetic words have acquired some extra urgency and meaning, and there are much harsher things yet, being envisaged. If we don’t manage to cancel the decree via our prayers, then chas v’shalom, the Rav will have to take the decree upon himself once again.

As the Rav said:

“This matter is very close to my heart. I am IN life-threatening danger, mamash.”

Go HERE to hear the Rav giving over the message in the original Hebrew. 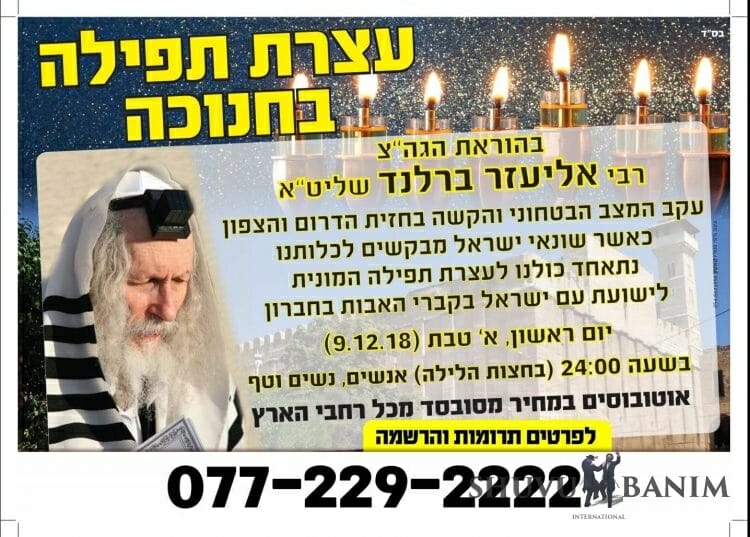