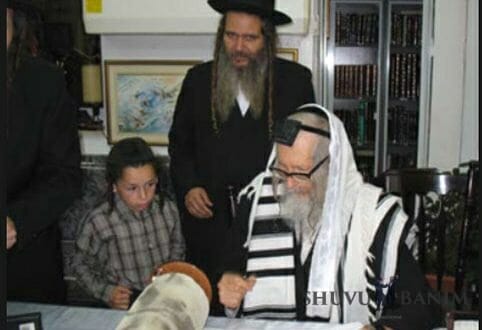 Rav Shalom Arush, shlita, head of the ‘Chut Shel Chesed’ institutions, continues his story about how he came to be one of Rav Eliezer Berland’s closest students.

“At that time, (shortly after Rav Arush first started to come close to Rav Berland, shlita), I had the strong urge arise to go and learn in yeshiva, and so I left university. Rav Berland, shlita, send me to a yeshiva to get some chizzuk (spiritual strengthening), together with Dudu Ben Ami (David Raphael Ben Ami).

“Of course, I still had my long hair, and it took me some time before I could bring myself to cut it. But, I’d already started to study and to pray. In the meantime, I got married. At that period of time, Moranu Rav Berland used to give over a shiur every Thursday, at the home of Gavriel Grossman, in Sanhedria, Jerusalem.

The first attempt to get to Uman

“I remember that I used to sit in that shiur at Gavriel Grossman’s, while Rav Berland would give a class that lasted the whole night, and not everyone could last the distance. I found myself a corner where I could lie down and rest, and then suddenly, someone woke me up and told me: “The Rav asked us to tell you that you got a visa on your passport.”

“I’d prayed a lot in order to have the merit of travelling to Uman, and in my eyes…this is how we have to believe, that whoever travels to Uman, this is a tremendously lofty thing. So, I’d prayed a lot about this. But, at the end, that first time I didn’t merit to actually travel after all. It’s impossible to describe the sorrow I had from this.

The first actual trip to Uman

“Every time that we’d go out together to the field, in order to do hitbodedut (personal prayer), I would take holy books with me. When the Rav used to take other people to do hitbodedut, he’d always say: ‘We’ll meet up again in an hour and five minutes’ – but when I went with him alone, it usually lasted much, much longer. Whoever has had the merit of seeing the Rav during the Shacharit prayers, it’s something unbelievable.

Rav Berland doesn’t have an ounce of fear

“Rav Berland is the only person I’ve ever met who doesn’t have even a drop of fear. He can go to places, by himself, that no-one else would be prepared to go to. One time, he was ill with pneumonia, and it goes without saying that he didn’t take any medicine, and he also didn’t want to go for any check-ups. His wife (the Rabbanit Tehilla Berland, tlit’a) contacted his mother, to ask her to persuade him to go for a check-up, and I accompanied him to the hospital.

“At the appointment, [the doctors] said that his situation was very serious, that he needed to be hospitalized. But he told his family that I [i.e. Rav Arush] was a paramedic, and that I would be careful to give him the medicine, and to make sure I took it at the right time.

“I then travelled with the Rav to Arad, and of course, he threw the medicine in the trash. But that wasn’t all, he also used to toivel (immerse) only in a cold-water mikva – and he wouldn’t dry himself off, afterwards. So I said to him, ‘kavod haRav, honorable Rabbi, at least now, that you’re sick [with pneumonia], you should towel yourself dry.’

“Because I knew that the Rav never toweled off, after immersing in a mikva (this is Rav Berland’s custom, following the tradition of the Arizal.) Straight afterwards, we went out to do some hitbodedut in the hills. I was doing hitbodedut when I spotted the Rav going to do hitbodedut amongst all the tanks. He didn’t see anything of the world around him – he didn’t even have a drop of fear. It’s impossible to really understand this.

The reason for the illness

“So, we would journey night after night, to Halhul, to Hevron, and I never saw him exhibit a drop of fear. It’s impossible to describe this, to anyone who didn’t see it with their own eyes. He told me the reason why he’d become ill. He told me that he’d wanted to stop his kiruv (outreach) work, and to just concentrate on his own avodat Hashem, his own spiritual work. But immediately afterwards, he’d come down with a serious bout of pneumonia.

“After that, he promised Hashem that he would return to his outreach activities, and that he would busy himself with kiruv, and then Hashem healed him.”

You can hear Rav Shalom Arush’s interview for yourself, in the original Hebrew, in the clip below: