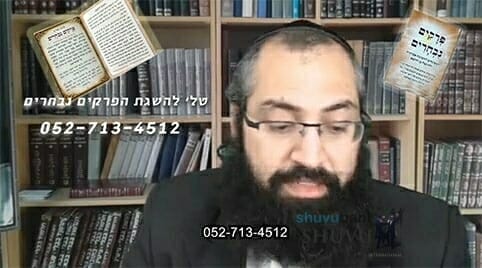 “Two points which have been heard from our Rebbe Rav Berland shlit”a regarding the greatness of the chapters.  I heard this from one of the supervisors who’s always found by our Rebbe the Rav shlit”a.  The Rav told him that over the last period, he hasn’t stopped saying the Selected Chapters.  He says them all the time, and added that ‘in the the merit of the Selected Chapters, I was released from the prison in Ramla.’

“This was in the month of Adar, when he moved to an apartment and was freed from the terrible pit in Ramla.  These are words which the Rav said: ‘In the merit of the Selected Chapters, I was freed.’

“Anyone who reads the words ‘I’ve been forgotten from the heart like a dead person; I was like a lost vessel…’  We see these verses – this is mamash a war.  The Jewish people are going through a war with the evil inclination – a spiritual holocaust.  This is the great Tikkun which Rav Berland revealed.

“Recently, word was spread according to which the Rav said to say the Tikkun Clalli seven times, and meant the Selected Chapters.  We have to clarify that this was referring to a specific reliable person who said that he dreamt that the Rav grasped the ‘Chapters’ and told him to distribute them in every place.  Then the Rav also said to say them seven times.

“Certainly, a person who merits to recite them seven times merits to a fundamental remedy for holiness, but these [the above words] weren’t things which the Rav said explicitly.  Explicitly, the Rav said to say seven times the Tikkun Clalli which Rebbe Nachman of Breslov revealed.

“One who can add the ‘Selected Chapters’ once a day, and one who can do more – these are wars.  This blows up the evil inclination – fortunate is he and his portion.

“Good advice: One who can say them on Shabbat in the time of favor, the holiest hours – many people report that this shattered their evil inclination.  Little by little, they feel a significant change from the standpoint of lusts, which abandon them [along with] all types of negative things.  Hashem should give us the merit to say them persistently.”

Read the previous articles on the “Selected Chapters”:

We don’t know what we have to rectify

When a person disgraces the Tzaddik, he has no tikkun