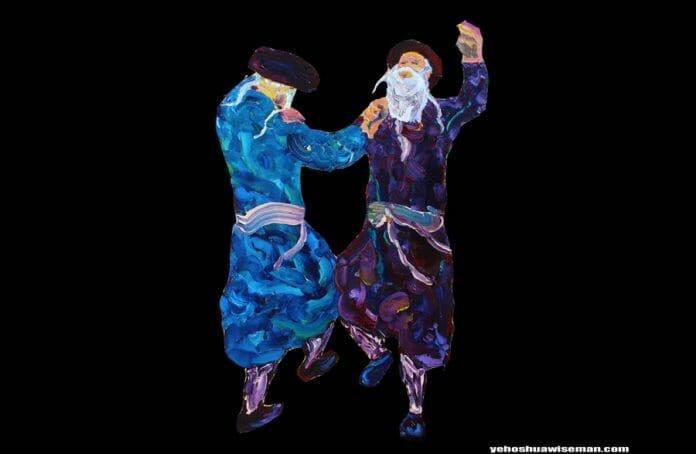 “On Tu Bishvat the Truth is Revealed”

Accordingly, the 15th of Shevat (Tu Bishvat) is at the end of the year and on a spiritual level the Year is divided up into four parts corresponding to the four evil forces[2] which are;

3) “a volatile fire” in the months Tishre, Chesvon, Kislev and

Some people are hot-tempered “volatile fires,” this person burns like fire!

He embarrasses others and he is a complete fanatic.  Some people personify the “the storm wind,” this person is fast like the wind his whole being is a whirlwind, a tornado, hurling everything in his path.  Some people are dreary like “a big cloud.”  This person is grey and gloomy like a cloud, always depressed, always sad.

He thinks he is more sophisticated and mature than everyone else, he thinks he has a more advanced mindset but this is just his sadness and depression.

Hashem does not want these three personality types, as it is written[3],

“Not in the wind of Hashem and not in the fire of Hashem, but rather the reserved[4] gentle voice.”

And this is the 15th of Shevat (Tu Bishvat) since by the end of the year after already refining and cleansing within one’s self his “storm wind” in the first quarter of the year and his “big cloud” in the second quarter, and his “volatile fire” in the third quarter, afterwards he merits the “reserved gentle voice” where Hashem exits.

When the 15th of Shevat (Tu Bishvat) arrives it is the center most day[5] of the fourth quarter of the year, and on this day a person reveals his inner most truth, which is the “reserved gentle voice.”

Yet only after overcoming Nogah, the mixture of good and evil, does one merit to reach the “reserved gentle voice.”

To overcome Nogah means knowing when to be silent and when to speak.  The majority of one’s life a person should be quiet, he should not speak, 99% of his life he should be only silent.  A person prays shimona esre[6] for one hour and afterwards he learns Torah without taking any breaks to talk to anyone, now maybe it is possible after all this – that one true word will come out of his mouth.

A wise person understands real honesty and recognizes that he is complete fallacy, he knows that he speaks lies, but in his wisdom he prays his whole life to Hashem (G-d) that he should merit one time in his life to speak one word of truth, one truly correct word should come out of his mouth, one word completely for the sake Heaven.

All of one’s speech is complete fallacy, complete arrogance and this is the “storm wind” and the “volatile fire.”

“If a person would merit true love burning within him for Hashem (G-d) he would pass out on the spot.”

Therefore a wise person knows that he needs to pray his entire life that “perhaps one time in this life I will merit to say one word of truth before Hashem (G-d), one time I should merit to clarify the appropriate words to say.”

This clarity, this truth we merit now on Tu Bishvat since Tu Bishvat is the end of the year, the culmination off all our hard work, so at this center most point of the final quarter of the year the truth is revealed.

[5] The Jewish months Tevas, Shevat, and Adar make up the final quarter of the year, and the 15th of Shevat is the middle day the month.

[6] The 18 blessings of the Amidah (the standing prayer)

A Prayer[1] for Tu Bishvat:

Please Hashem, warm us with your mercy and please make an effort that we should succeed in fixing our souls.  Help us from this moment onwards that we should not have any enthusiasm in our hearts for any vice[2] in this World even for a permissible vice, and all the more so that there should not be any inclining in our hearts for any vice that is forbidden.

Help us and have mercy on us and pour your wealth upon us in compassion, and our hearts should have enthusiasm for holiness, for serving your name in truth, to pray and to strengthen ourselves, to learn and to teach, and to do all the Mitzvos (Commandments)  with great enthusiasm in holiness and purity which is your true will.

Story 1 of 2: During one of the early trips to Rebbe Nachman’s Burial Site (located in the Ukrainian city of Uman) led by Rav Berland Shlit”a, the KGB (the secret police of Communist Russia) kidnapped the Rav from his hotel before the group arrived in Uman.  The KGB “official”[1] coldly told the Breslov Chassidim staying at the hotel that the Rav is going into detainment for intense interrogations.  He further explained that due to the seriousness of the allegations against the Rav, the KGB does not know when the Rav will be released.  The KGB officers[2] placed the Rav in their squad car and drove off.  Not long after the kidnapping the Rav showed up at his hotel where the Breslov Chassidim were staying.  Everyone received the Rav with tremendous joy and happiness, many had thought they may never see the Rav again, Heaven Forbid!  The Breslov Chassidim immediately asked the Rav, “How did you do it?  How did you escape from the KGB?!  The Rav told them, “They took me to their police station and put me in a room off to the side and there were two KGB policemen there, one questioning me and one standing guard.  After a few minutes the guard left and then the interrogator told me ‘to wait a moment’ and he left too.  After a moment I got up and walked to the doorway, no one was there so I walked into the hallway.  I walked down the hallway and no one stopped me.  So I walked around the station until I found the front door and left.  Then I caught a cab strait to the hotel.”  Everyone was amazed, and then the Rav said, “Come on! We have to get to Uman, where are the buses that are supposed to take us?”

Rav Tzanani taught[1] “There is no need to worry about what the future holds, and this worrying is the evil force of the ‘storm wind.’”  Since this type of anxiety over what may happen causes one’s mind to speedily race over all the sorts of scary and frightening potential future scenarios causing panic and fear.   In retrospect these scenarios are not even relevant and all this worrying is completely futile.  This “storm wind” is living within one’s own imagination[2] removed from reality and Rav Succot[3] said, “The most important evil force to break out of is the imagination, we need to leave our imagination behind.” Living in the moment means focusing all of one’s energies into serving Hashem through Torah, prayer, and Mitzvos (Commandments) at each moment.  Furthermore, when one finds himself in a difficult situation Rebbe Nosson of Breslov[4] advises, “Those who are being pursued need to be careful not to go with any sophistication at all and only to cry out to Hashem (G-d).”  This we learn from this week’s Parsha, when the Nation of Israel is surrounded[5] on all 4 sides by wild animals, the Egyptians, and the stormy sea.  The Bostoner Rebbe[6] explained to me[7], “each Jew there had his own opinions about what to do; this one had a political solution, this one had a financial solution, this one had a military solution, but only Moshe had the true solution – to jump into the sea!”  Meaning only Moshe knew the secret[8] “to be unmoved[9] and to be quiet and to yearn for Hashem’s (G-d’s) rescue.  Most of the time being unmoved and being quiet, leads one’s heart to burn for Hashem (G-d) until he begins to cry out to Hashem” and this is what Moshe did until Hashem[10] came to the rescue and said to Moshe, “The time for lengthy prayers to me is over! Speak with the Nation of Israel and go! Now, raise up your staff and place your hand upon the water and the water will split and the Nation of Israel will go through the water on dry land.”  And this is what happened to Rav Berland Shlit”a when the sea split for him in the KGB’s police station.

[9] This translation is from the Breslov Research Institute’s Likeutey Moharan for the word דום.