Watch the Israel Police together with the Jerusalem Municipality destroy Rabbi Berlands house in Jerusalem and hear the Rabbi’s response: 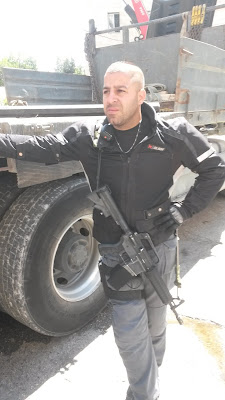 This morning the Jerusalem municipality inspectors arrived with “Yassam” Police Force to the Shuvu Banim community leader’s house Hagaon Rabbi Eliezer Berland Shlit”a in “Hachoma Hashlishit” in Jerusalem and began to demolish a large balcony and a simcha hall that have been used for the past 18 years.
The balcony was used as a study and reception of Rabbi Eliezer Berland while he was living in the country until his departure three years ago. and has since been used by his wife an daughters who give classes and lectures to women and girls who come from across the country.
The followers of the Rabbi saw this as a continuation of the ongoing persecution campaign against their leader and clear retaliation by the authorities for the disappearance of Rabbi Berland in recent weeks.
There is absolutely no logic to the fact that these structures were standing for 18 years without a word of opposition and suddenly today it is being demolished.
Tonight Rabbi Berland spoke to his followers from his unknown location and related the following message (translated):
It is a house that for years and up until today was solely used for Torah study and prayer, for classes and activities which perpetuate the study of Torah in Israel. To destroy this now is unparalleled malice.
They just did it as revenge for my suddenly evading their hands so they are now looking through all means to avenge the Berland family.
It’s simple revenge, clear to the eyes, without any moral or legal justice.
They found the rabbi as a means to enforce their wickedness. They see the Rabbi and Rebbetzin for many years bring back the people of Israel to repent and become g-d fearing Jews, and are just looking for ways to stop this.
Our response must be to increase all of these activities, to increase troops, increase activities of torah study, teaching of torah, and bringing Jews to teshuva, so that they will see that they will not succeed in all their plots. The Teshuva movement will increase many folds over. If they succeeded in destroying the house we must build whole cities of torah learning.
ASK ADVICE - RECEIVE A BLESSING