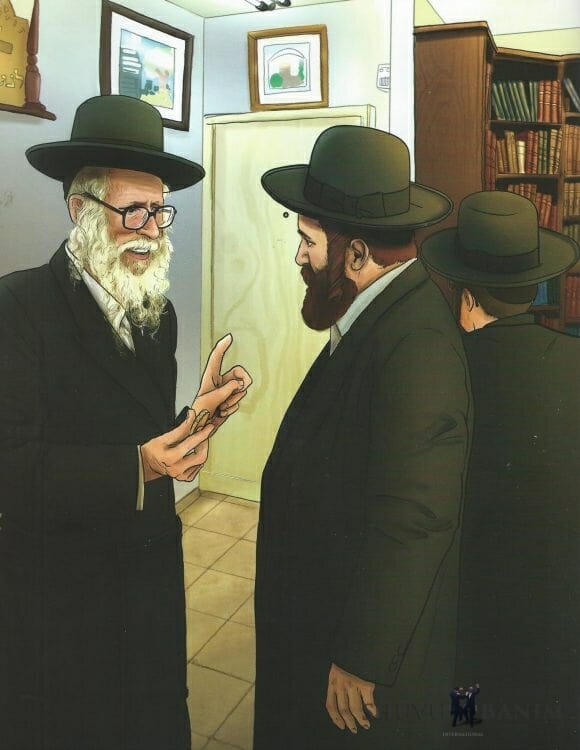 A father and his teenage son entered the Rav’s room. The father had requested a meeting with the Rav. He was concerned that his son was going down spiritually.

The father’s feeling was not wrong. The son looked on the outside like a ben Torah, however his heart had already become cold to Torah and mitzvot. He was in contact with bad, treacherous friends.

The father thought that perhaps the Rav could speak with his son words of Torah and mussar. This way he could awaken the young man to do the work of the Creator and keep the mitzvot. However, to the surprise of the father, the Rav started to talk about other things, without any words of Torah or mussar.

After about an hour, the meeting was finished. The father and son stood up and were getting ready to leave. The father was wondering what the Rav had accomplished. When they got near the door the Rav called out to the father. The Rav came over, handed the man a coin, and whispered to him, “With this coin I am buying your son!”

With this action, the Rav did something that a few tzaddikim of prior generations had also done. “To buy” so to speak, the soul of a boy who was in spiritual danger, in order to protect him and to guard him from the face of the yetzer hara.

This action is indicated, as it is written, “when you buy a Hebrew slave”. This is the way the chassidic gedolim did it. When a man raises himself to a high level of spiritual holiness, he can help others by buying a body that is at a lower level and raising him to a higher level, according to his spiritual level. This was done when a young man was lost and requested to find his way back to Judaism, even though he was having a hard time returning in teshuvah. With this act, the gedolim were able to raise those people up; to help them handle the temptations of the yetzer hara.

This is what the Rav did in this case. The Rav bought the soul of the young man and protected him, so that he would not get so far away that he would be unable to return.

And indeed, right afterwards, the boy merited to be awakened to teshuva. He left his bad ways and his bad friends, and returned in complete teshuva. Today he is an avreich with fear of heaven.

This is the way that the Rav succeeded to save a soul from going down into the pit of destruction. And to establish a house of Torah and fear of heaven from a bachur that looked like he was about to go down to the pit of doom forever, heaven forbid.

David Simcha - July 21, 2022 0
Celebrating ten years since the mass teshuva gathering at Ramat Gan’s Winter Stadium through the instruction of our Rebbe, the Gaon and Tzaddik, Rabbi Eliezer Berland shlit”a, under the title “There are no evildoers...
Read more