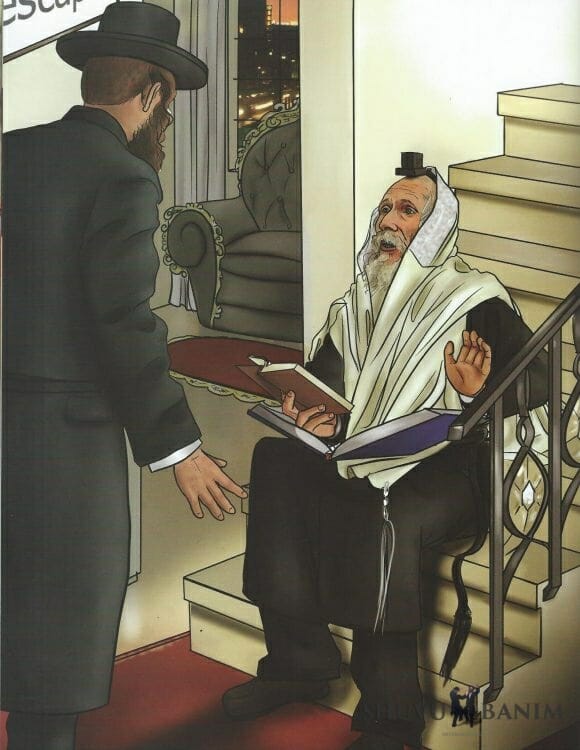 The hotel was expensive. However, the Rav’s students felt it was an honor to pay for the Rav to stay in a hotel like this, even though they knew that the Rav did not like rich and fancy things. He did not have any interest in the beauty and glory that was in every corner of the hotel. The Rav arrived at the hotel on a Thursday late in the evening.

A short time later one of his students landed on a late flight from Israel to visit the Rav. On that day the Rav had been fasting and it was evening time right at the end of the fast. When his student arrived, the Rav’s face lit up and he greeted the student with great affection.

He was holding his student’s hand and he began to sing niggunim with deveikut. His face was burning like a flame. A meal was served to the Rav, however the Rav looked askance at his plate and he whispered to the student, “Nu, you must be exhausted from your long trip. Maybe you should eat something?” The student was embarrassed by the Rav’s suggestion. But before the student had time to answer, the Rav had already stood up from his place, grabbed a few books and left the room.

The minutes passed and the Rav did not come back. The Rav’s students and helpers became worried. They began to look for the Rav in the hotel hallways and near the entrance.

They did not find the Rav. After a long search, the students’ fears grew, until they decided to search the hotel level by level, using the emergency stairs.

On the emergency stairs a surprise was waiting for them. They found the Rav sitting on a stair with books on his knees, studying with great concentration. The Rav did not notice the students who were watching him. Only after some long minutes did he raise his eyes from his books.

“Why is the Rav found here and not in his luxurious room?” asked the worried students. The Rav answered right away. “The light in the hotel room was too weak and it was difficult to study. Here on the stairs the light is strong and it is possible to study quietly and with real enjoyment…” Indeed this is the pleasure of the tzaddikim, to escape into the Torah and to enjoy all of the knowledge.