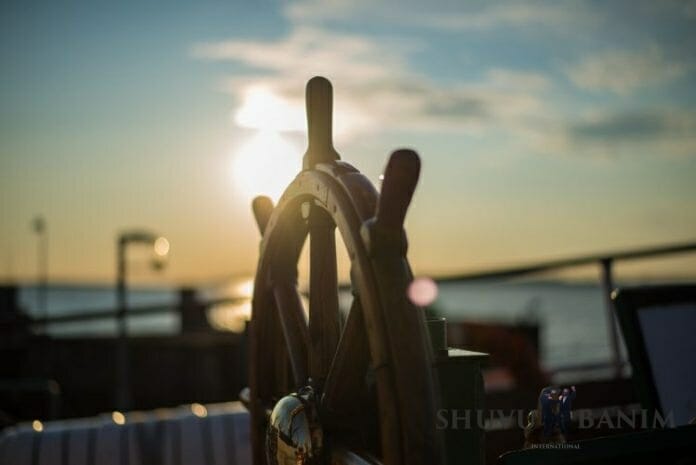 All the Jews in Chul will return to Israel on ships

A new shiur from Rabbi Eliezer Berland, shlita, that was given over from the prison where the Rav is still being held by the Israeli authorities, via telephone yesterday, April 1, 2020.

You can hear the Rav speaking in the original Hebrew by clicking HERE.

We are now in Parshat Tzav, the sixth aliya, now we are making teshuva.

“He slaughtered it, and Moses took some of its blood and placed it upon the middle part of Aaron’s right ear, upon the thumb of his right hand, and upon the big toe of his right foot.” (Vayikra 8:23)

They took the blood from the second ram and put on the middle part of Aaron’s right ear. [Speaking to the listener on the phone:] You have a big toe? You have a right hand, and a right ear? So, baruch Hashem, you have all three things, and you will be the Kohen HaGadol.

Aaron had four sons, two were subsequently burned. Altogether, Moshe did this to five people, Aaron and his four sons.

What is the inyan (matter) of the ear and the big toe?

There were the signs that Yaakov gave to Rachel. Rachel had five veils. Yaakov never once saw her face. So, it was possible to switch her, because she went with five veils. One veil was of yellow diamonds, one veil was of red diamonds, [another was of] blue diamonds….

In the old days, every veil used to be studded with a hundred diamonds.

(Rabbi Berland starts to sing the ‘song’ of the choshen (breastplate stones):

Rachel was surrounded by fire.

All the Matriarchs were surrounded by fire. Rachel didn’t reveal the signs to Leah. She just told her that when she was under the chuppah, she should touch her ear and then her big toe, that this was the minhag (custom) of Avraham, Yitzhak and Yaakov.

This was the minhag, and each person needs become acquainted with this minhag. And if she didn’t [do this], then Yaakov wouldn’t accept her.

Rachel was kodesh kodeshim (holy of holies). Rachel was the Shechinah.

“Thus said Hashem: Restrain your voice from weeping and your eyes from tears; for there is a reward for your action – the word of Hashem – and they will return from the enemy’s land.” (Jeremiah 31:15)

Because Leah was also the Shechinah. Moshiach ben David will come from Leah, from Yehuda. From Rachel will come the Moshiach ben Yosef. Yosef will come, and will blow on the shofar tekiah, teruah, tekiah. And then, Heftziba will come, because Heftziba is more important than everything.

It’s written that Heftziba will go up to Har Nevo (Mt Nebo), and there on the peak of the mountain is the kever (burial place) of Moshe Rabbenu. There, there is a huge rock. There, Heftziba will blow the shofar, and this huge rock will split.

Then, she will see Moshe Rabbenu who will learn with her from shkia (halachic twilight) until the morning. At netz (sunrise), he will go with her to the Me’arat HaMachpela (the Cave of Patriarchs).

There, all the Patriarchs will blow the shofar, and at that moment, all of Am Yisrael will leave their homes, their abodes, and will board ships.

Then, all of the goyim (non-Jews) will see that millions of Jews are arriving, everyone will arrive to the Bat Yam beach, and the goyim will see that the Jews are coming from across the whole world.

And like this, Heftziba  will blow tekia, teruah, tekia. Afterwards, Moshe will blow [the shofar], and then afterwards the Patriarchs.

All of the Jews in the Diaspora will leave their homes and their businesses, and will board boats, and they will arrive within a week from every corner of the world.

Then, the Arabs will see that Eret Yisrael is only for the Jews, because today they already got 16 mandates (seats in the Knesset), they were brainwashed into thinking that Eretz Yisrael was only theirs.

Because a Jew is all-giving, and they don’t know who to give to. So come, let’s give to an Arab who wants to kill you, and Nazis. The whole idea of the ovens came from the Mufti (Mohammed Amin Al Husseini). The Mufti went to Berlin and met with Hitler, and told him that he should make ovens.

They wanted to eliminate the Jewish race.

They thought that it was possible to eliminate the Jewish race. But if there was no Am Yisrael, then Hashem would destroy the whole world. Why do we need the world? The nations just eat and drink, they don’t pray, they don’t put on tefillin, why do we need them at all?

The entire reason we came into the world is only in order to pray to God, it’s only for prayers.

And this is the tanuch, the inner ear, that they put blood on the right inner ear, so the Kohen HaGadol needs to listen like Rachel. Rachel listened to everything, she was kadosh kadoshim, she could fly in the air.

Because the women, because of their great temimut and emuna, used to fly in the air.

Women can fly in the air, pray vatikin (with the dawn minyan) and then return to prepare the sandwiches for the children.

Within two minutes, the children would be downstairs, washed and dressed. Until the tender (school minibus) would come and collect them, they would finish all of Tehillim.

There’s nothing like this, we are meant to finish the whole of Tehillim every single day.

A person comes to the world to finish Tehillim. This is what Hashem created him for. Every night, Yaakov would finish Tehillim. He would go to the field, light a candle, and finish the whole of Tehillim. We learn all of this from the verse:

“He slaughtered it, and Moses took some of its blood and placed it upon the middle part of Aaron’s right ear, upon the thumb of his right hand, and upon the big toe of his right foot.”

After the blood was collected, they would mamash fly in the air.

Like in the desert, how do you go in the desert? They didn’t go on the earth. Underneath them, there was an anan (a cloud). They were such pure kadoshim (holy people) that it was forbidden for them to go on the earth. There was a cloud of glory above them, and underneath them, and another four on the sides, and another that went before them that flattened all the hills and the mountains for them.

It’s written that were snakes on the way, each snake measured around 12 metres. The snakes would bite them, as it’s written in Parshat Chukat, that they would say about the manna that it was bread of destruction, that you eat but nothing comes out.[1]

A person comes to the world to see Hashem eye-to-eye.

[1] The manna was so pure, that it was totally absorbed by the body without any waste products that needed to be expelled.