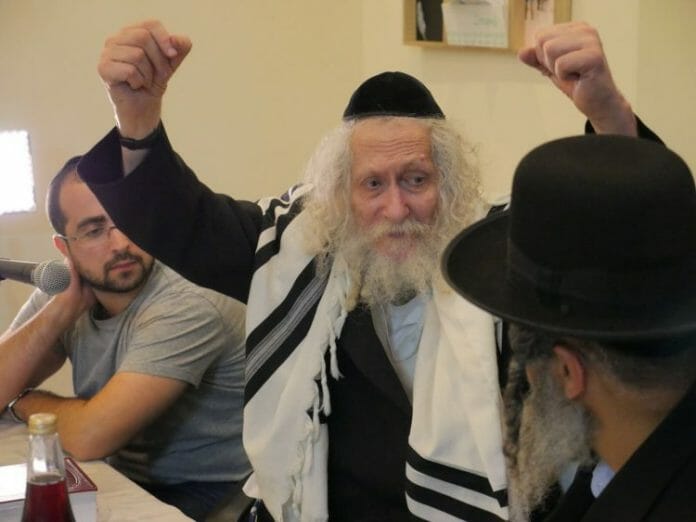 “You need to continue with your Torah studies. Do not fall into depression that the Rav is not here! The Rav just collapsed, he would leave his home everyday at 1pm and return at 1am, so he needed this rest. The Rav is now here in a convalescent home, relaxing.

“Now is the Parsha of Gan Eden, the greatest Parsha, V’atat T’tzave which doesn’t have Moshe’s name, because now Moshe surpassed all names, Moshe rose above all names, so the Parsha doesn’t have the name of Moshe, because now in parshat T’tzave he’s higher than all the names in the world. That’s why from parshat Shemot every Parsha had his name – in Shemot its mentioned, Va’era, Bo, afterwards Beshalach, Yitro, Mishpatim all mention his name. Here his name is not mentioned. It doesn’t say “And Hashem spoke to Moshe saying”, like all the other parshot. Because Moshe is the tzaddik, ‘Mechaini Na [please erase my name]’, is the Tzaddik, ‘I am Nachman’, it’s the letters Mechaini Na, ‘I am Rebbe Nachman’ (read backwards). They took me to the Russian Compound and they told me the letters ‘I am Nachman’. Rebbe Nachman is the neshama of Moshe. Rabeinu is V’ata T’tzave, everything about Rabeinu is hinted in V’ata T’tzave. Everything about Rabeinu forever and ever for all eternity is mentioned in V’ata T’tzave. Everything about us is V’ata T’tzave, everything about us, it’s mentioned in V’ata T’tzave. A Parsha like this does not exist in the entire world…”

Editors note: See our webinar “Open discussion about Rabbi Berland from a Torah Perspective” where we expounded on the idea of the tzaddik taking on himself disgrace and persecution for Am Yisrael as Moshe said to Hashem after the sin of the Golden Calf “if you want to destroy the people then erase my name from Your Book.”

Moshe is the tzaddik of the generation, when he said mechaini na erase my name and took on himself disgrace and persecution to attone for the sin of the Golden Calf, he actually reached levels higher than names, higher than human comprehension, beyond description. The erasing of his name, the persecution and suffering for the sake of Am Yisrael, brings him to levels beyond comprehension, for him that’s Gan Eden. The persecution for the tzaddik is Gan Eden. He wants us to know that, and to realize that we too can be in Gan Eden, if we stop worrying, and accept everything with joy and love. A tzaddik like this does not exist in the entire world.

Yesterday morning, the Rav called the kollel of Givat Olga and gave a ten minute shiur about how the tzaddik is willing to give up his life for the sake of Am Yisrael. After the shiur they asked what can be done for the Rav.

He said, every day until Pesach to say 7 times tikun hakalli and to recite 7 times the stones on the ephod (Shemot 28:17):

The signs of Moshiach, as described in the midrash of Rabbi Ishmael

Why does Mashiach need to sit in prison? — Rabbi Nir Ben Artzi shlit”a