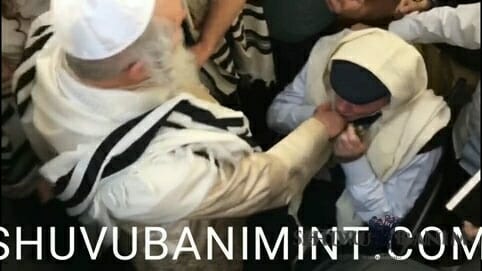 Rav Berland and the Milkman are reunited

Two years’ ago, we shared the story of the warning that the Milkman, Rav Chaim Cohen, shlita, gave to a talmid chacham who came to him for advice and a bracha, as told by Rav Yehuda Sheinfeld, shilta, one of the Milkman’s closest students:

‘This talmid chacham told the Milkman that his wife had been stricken with cancer of the brain, and that they’d been told that she needed to travel to the United States for treatment. The man said to the Milkman: ‘There is no cure for her illness here in Eretz Yisrael, so what should I do, revered Rabbi?’

“THE MILKMAN RESPONDED: ‘TELL ME SOMETHING. DID YOU TALK BADLY ABOUT RAV LAZER [I.E. RAV ELIEZER BERLAND], SHLITA? DID YOU WRITE SOMETHING BAD AGAINST HIM? OR DO SOMETHING TO TRY TO HURT HIM?’

‘This talmid chacham started trembling violently when he heard the holy Milkman’s questions, until finally he blurted out: ‘How is this connected to Rav Berland? Why are you mixing Rav Berland into my wife’s condition?’ But the Milkman wouldn’t be put off, and he firmly asked him again:

“Finally, the talmid chacham replied: ‘I spoke against him, and I made statements against him.’

“THE MILKMAN REPLIED: ‘IN THAT CASE, THERE IS NO CURE FOR YOUR WIFE’S ILLNESS.’

‘And, I also don’t know if there is any way that you can rectify what you’ve done. Maybe, if you now go and turn the whole world upside down, and go and write and distribute things, and go and tell everyone to change their ideas about Rav Lazer, then maybe, maybe, there’ll be a miracle. But we don’t talk [negatively] about Rav Lazer! Do you hear?’ concluded the Milkman.’”

The story recounted above is just one of the many emphatic statements that the Milkman has made about the holiness of Rav Berland over the course of recent years. But for various reasons, the two have been unable to meet in person for quite some time – until this week.

This week, these two holy men met at the occasion of the brit milah (circumcision) of Rav Berland’s great-grandson, the son of Rabbi Tzafania Sheinfeld, which took place in the Milkman’s synagogue in Givatayim.

During their meeting, Rav Berland and the Milkman greeted each other with the great warmth and feeling that is a characteristic of when two old friends are reunited with each other, and they spent many minutes engrossed in conversation.

Rav Berland then gave the Milkman a blessing that he would enjoy great length of days and good health, and that he should continue to lead Am Yisrael to see the coming of the Moshiach.

In return, the Milkman kissed Rav Berland’s hand, and with tremendous feeling replied:

“Both of us together will”.

The brit then continued, and the child – may he live long! – was named ‘Chaim’ after Rabbi Chaim Vital, zt’l, the principle student of the holy Arizal who helped to publicize his teachings to the masses. It seemed the natural choice, as the bris took place on Rabbi Vital’s yahrtzeit.

Rav Berland requested that his grandson should invite all the Lamed Vav Tzaddikim, those 36 holy men who are supporting the world with their Torah learning and knowledge of the Arizal’s kabbalah, in order to renew the light of the kabbalah for the next generation.

You can watch the full clip of the meeting, below: