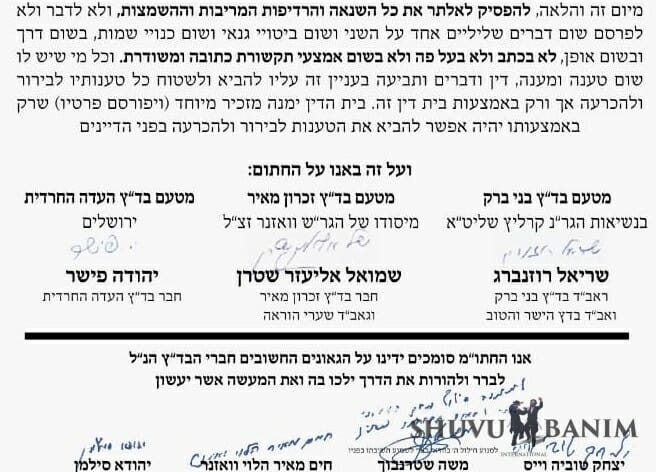 Three of the biggest Batei Din (Jewish Courts) in Israel just issued a ruling against the persecution and slander of Rabbi Eliezer Berland shlit”a.

The psak din is signed by the Beis Din of Badatz Eida Chareidis, Beis din of Rav Nissim Karelitz and Beis Din of Rav Shmuel Wosner.

In the letter issued directly by the Beis Din and which holds halachic authority throughout the entire Jewish world as many of the top Gedolei Yisroel are signed below, states: “To stop immediately all hatred, persecution, arguments and slander, in writing and in speech, and in all form of media and publication.”

The following is the contents of the letter of Beis Din:

Court appointed by the most important Batei Din in Israel

After we the undersigned have been appointed by the most important rabbinical courts in Israel to serve as the “Beis Din” to clarify the machlokes against the Rav and chossid Rabbi Eliezer Berland shlit”a, leader of the Shuvu Banim community and to instruct the path to be followed. and after the Rav and chossid Rabbi Eliezer Berland shlit”a and his congregation accepted to come before the court. Therefore, the court requires all parties, from this day onward, to immediately cease all hatred and persecution, and not to speak or publish anything negative on each other and no derogatory terms or names, in any matter or in any way, either in writing or orally or in any written and broadcasted media. And any person who has any claim or complaint, debate and demand on this matter must bring and lay out all his arguments for clarification and decision only through this court. The court shall appoint a special secretary, and only through him the arguments may be brought for clarification and decision before the dayanim.

And for this we signed:

We, the undersigned, rely on the important Geonim, the members of the Badatz, to clarify and acknowledge the way in which they will go and what deed they will do 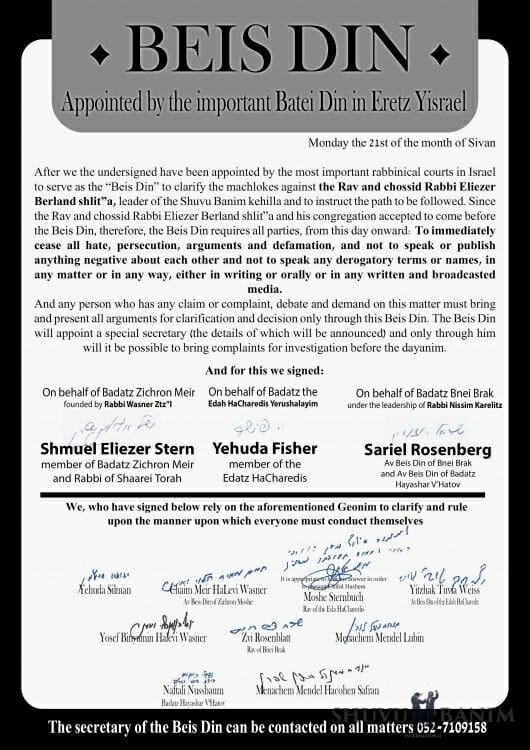