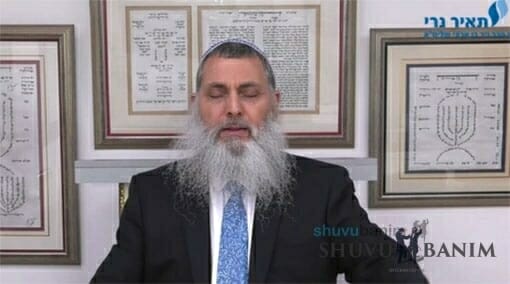 In words which he gave over on the night of 27 Kislev 5782 (November 30), Rav Nir Ben Artzi shlit”a spoke about the way in which Mashiach will be revealed.  These are his words:

“’It was at the end of two years and Pharaoh had a dream and behold he was standing on the riverbank.’

“Two years passed and Yosef was supposed to be in the dungeon for another ten years at least, or five or ten, but not for another two years.  However, the Creator of the World compressed the time into two years, like how Hashem brought down the exile to 210 years [from 400] – Pharaoh dreamt after only two years.

“Pharaoh was wiser than everyone and quickly understood the light, the dream.  What happened to him there also happened to him here – ‘Pharaoh sent and summoned Yosef, and they hurried him from the dungeon.  He got a haircut and changed clothes and came to Pharaoh.’

“Who did they send there?  They informed Yosef that from Heaven he needs to be removed today from the prison.  The decree ended and he needs to go free.  An angel from heaven informed him.

“’[He] summoned [Yosef] – that Hashem summed him and not Pharaoh – so too will our righteous Mashiach appear.  Mashiach ben David – suddenly the Creator of the World will bring him out in public – suddenly the day will come.”