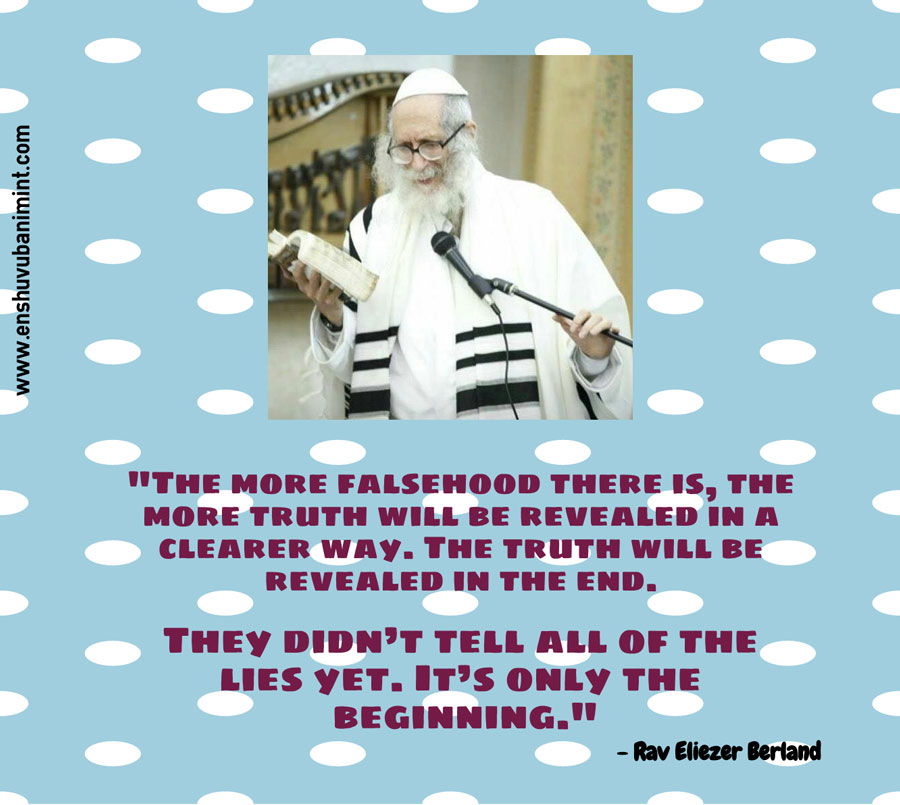 “In every generation there are new lies. The sheker makes up things that never existed from the creation of the world. But specifically through this spreading of the lies, the sheker will take over the whole world and there won’t be even a drop of truth. Only a small number of people will hold strong to the truth, but the sheker will take over everyone, like Rav Natan says. And everyone will be taken over by the sheker and everyone will be fooled, and only then will the truth be revealed and Moshiach will come. Only through the increase of sheker.

“We want the sheker to be satisfied and to get stronger and stronger without end, [in a way] that wasn’t since the creation of the world, and then whoever is still holding onto the truth, will merit seeing Melech HaMoshiach. Moshiach will come when he sees there are some people who aren’t being pulled and who know that it’s sheker and nothing is able to fool them or confuse them.

“Because as long as it’s possible to change people’s minds, to brainwash them to go for the sheker, and then to convince them to go against the sheker, Moshiach won’t have anywhere to go. Because then Moshiach will come and also convince people to come after him… No! We need that the sheker will be able to convince everyone until it’s no longer possible for them to change their minds again.

“When everyone’s minds are turned around to the sheker, if there’s even a minyan left, 10 people left, like it says ‘Bei Knishta Hada’, (one small group of people) whose minds haven’t been turned by the sheker, then the Moshiach can be revealed, and he’ll reveal himself to this group of people. And from here, it will go on and spread throughout the whole world.

“Like Rav Natan says, the main revelation of truth will be in the End of Days. The falsehood will be spread in the world until it reaches its satisfaction, until there are almost no more people left that it needs to conquer. There won’t be any space for a point of truth. Then, specifically, will ‘the lips of truth be established’, through the sheker being increased very much. When there’s more and more sheker, that’s when the truth will be established.

“So why did Hashem let it happen? Hashem let it happen so that the truth, a person’s truth that he has within him, should be so strong, should be so burning strong, and should get stronger the more he sees that the sheker is winning.  That real truth from within him, the pure truth from within him, should get so strong they can’t brainwash him [anymore]. And then, he’ll reach the level of Atik Yomin, a very high level, and then Moshiach will be revealed.”

Taken from a recording of a Lesson Rav Berland gave on Likutey Halachot, in Shvat 5775. See the full Hebrew transcript here

see recent lesson on a similar topic: “Every disgrace is a diamond don’t throw it back”