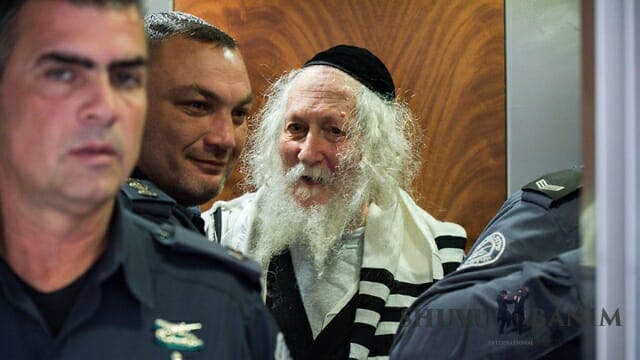 Transcription of a recent chareidy radio broadcast about Rabbi Berland.

The original Hebrew program can be heard HERE

I told him that before that could happen, I’d need to have a heter (rabbinic permission) from a Rabbi, because after all, there are halachot that prevent me from speaking lashon hara (evil speech) about a fellow Jew.

I went to talk to a famous Gadol HaDor about the situation, who told me: ”Listen, guard your mouth, guard your heart, guard your brain, and you will survive.”

I didn’t really understand what he meant, but I did understand that there is absolutely no permission to speak lashon hara.

I went to see another Rav, who told me that there is a psak Beis Din (ruling of the Beit Din) that it’s forbidden to speak about Rabbi Berland, and that he is kodesh kodeshim (holy of holies).

I went to see another Rav about it, and then I started to understand that in the media there are absolutely no reports that ever say anything good about Rabbi Berland. The whole media is one-sided, and together they are denouncing Rabbi Berland as the biggest criminal who ever lived, and there has never been anyone else like this.

But then on the other side of the equation, I’m going to all these Gadolei HaDor, and they’re telling me there has never been a Tzaddik like this, who is fighting the battles of Hashem….

The situation is one of extremes. We can’t see, we have no idea of what’s really going on. Someone explained to me that there is a specific mentally-deranged person who spends all their time every day on the internet, and this person is the one who is writing most of the things against Rabbi Berland, through various pseudonyms and false accounts and he is spreading them around the media.

Baruch Hashem, I spend a lot of time with the Gadolei HaDor. I don’t really know if I’m allowed to share what one Chacham told me, but it’s burning me up and I can’t keep it to myself.

The level of confusion will be so tremendous, and it will be so very easy for a person to cause a decree upon himself [a sentence of] life or death – not here, but in the eternal world. Because of some throw away comment about the Tzaddik, he could miss out on the whole of his olam haba (next world).

It says that Ben David (i.e. the Moshiach) will only come with hesech hada’at without us realizing (our minds are preoccupied). People aren’t paying attention that all the signs have been fulfilled, but we still don’t see.

It’s because of us, that he has to sit in jail, while we have the good life, as though it’s nothing to do with us. He’s despised and shamed, the ‘biggest criminal they have there in jail’. It reminds me of the gezeirot (decrees) of Nevuchadnetzer and Antiochus, who took our holy Tzaddikim, and turned them into the biggest ‘criminals’.

I recently heard on the radio someone mentioned the words of the Lubavitcher Rebbe, in relation to the signs of the geula, that are occurring before our very eyes. And we have all the testimonies from the Tzaddikim of our own generation that the Moshiach can be found in our midst, and is walking between us, and bringing people back in teshuva.

The Amoraim of the Gemara could bring people back to life just by speaking. So this Amora [who said let the Moshiach come, but let me not be there], do you think he was scared about the missiles of the war of Gog and Magog?

The Midrash says that the Moshiach will be the most abused person in the world. That he’ll be called a thief, and a criminal, and a [sexually] immoral person, just as they said about Moshe Rabbenu, when they called him an adulterer, and as happened with the Baal Shem Tov, and with King David – all the Tzaddikim.

This is one of the signs that he is Moshiach.

Rav Kaduri, z’tl, said that the first people who will go against the Moshiach will be the media, and we can see what’s happening. Without any exaggeration, there are three new articles every single day talking against Rav Berland.

It looks like they are really scared of him.

He comes to a non-religious Jew, says something to him, and within five minutes all that Jew wants to do is to learn Torah all day.

The people who are listening to this [in the original Hebrew, HERE], already know that yesterday after 10 straight hours of interrogation [by the Israeli Police], Rabbi Berland passed out. They took him on a stretcher to Shaarei Tzedek hospital in Jerusalem, and I ask myself, how much worse can this terrible persecution get?!

After they treated him there, they immediately took him back to jail without allowing him to recuperate – that he should be imprisoned again in a cell.

We are talking about a squadron of Tzaddikim, and whole groups of God-fearing chassidim who are saying that Rabbi Berland is the BIGGEST tzaddik there is.

Rebbe Nachman of Breslov says that the more money you give a Tzaddik, the better it will be for you. That way, it’s possible to get you out of all your degradation, from the prison of your lusts that you currently find yourself in.

DONATE TO HELP RABBI BERLAND GET OUT OF JAIL

You don’t know what where you are. This is galut (exile! Pray for the Beit HaMikdash. The Tzaddikim are taking all of the destruction upon themselves, they are sacrificing themselves.

I’ve seen so many people from his community, the holy community of Shuvu Banim, thousands of pure, holy people – tzaddikim – who are just busy learning Torah day and night. They spend all day long doing hitbodedut and praying.

They aren’t going off to arrange protests, and to block the roads – because that’s not the path of Rabbi Berland.  Instead, they go off to Kever Rachel, and they go and pray and to cry out, and many big tzaddikim come and join in with them.

I was at Kever Rachel, and I saw how they were crying out. If these are Rabbi Berland’s students, then I want to be like them. I want to be ‘one of his’, and to be on that side.

Dear Jew, please open your eyes, and see for yourself what side you want to be on.

Rav Kook said that when Rabbi Berland came, he would redeem us. We have no idea what they are doing to him there, in the prison. They have a huge grudge against the charedim, and they are taking it all out against the head of those people who are bringing others back in teshuva – i.e. Rav Berland.

The Rav’s path isn’t to engage in opposition and violent protest, God forbid. But we have to cry out to the heavens, and to ask our Father in Heaven that he will help us, and redeem us with rachamim (mercy).