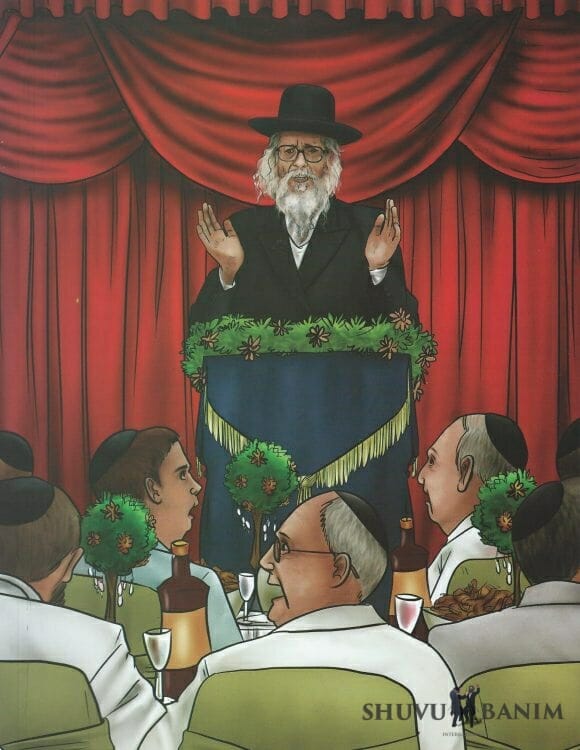 One aspect of the Rav’s leadership that was well known to his faithful students was to avoid the ‘falseness of grace’. The Rav did not like people overdoing respect with falseness.

The next story happened many years ago when the Rav’s chassidim from the land of Israel and from the US decided to make a “dinner” in the United States. The dinner was a fancy gala with a band and singers to make the evening more pleasant. It was to request donations from wealthy donors to support the schools and shuls in the land of Israel.

The evening was planned to be fancy and glamorous. The tables were set with goodies and wonderful food. There was an expensive chandelier, and special presents were waiting for the people on their plates. A famous band was at the ready.

However, the surprise of the night was, without any doubt, the Rav, who had arrived especially from Israel to the United States in order to bless and to give strength to the donors. At the time that the Rav entered the hall, there were already many men sitting around the tables, rich people that owned a lot of land and money. However, his students could see on his face that the Rav was not satisfied by this “special evening”. The people who had organized the evening were certain that the Rav was happy with all the glorious and fancy things.

The host came up and invited the Rav to say a few words. The men clapped in excitement. The Rav came to the stage and stood in front of the microphone and closed his eyes. To the surprise of the organizers, the Rav began to tell the honored guests that it would be a pity for them to take out their money and to donate, because his holy yeshivah didn’t need a thing. Everybody already had what they needed. It would be better if they could find other yeshivas and other institutions that they could donate to. They could also donate to needy families.

The Rav finished his words and went down from the stage. When the people who organized the event tried to ask the Rav why he had spoken that way, the Rav’s face lit up with a precious light and he answered, “Ah, Baruch HaShem that we escaped the “chein shel sheker (falseness of grace)”. We avoided gifts that come from unholiness, pride and honor…” This money can only do harm to people who are working so hard to learn Torah for Hashem’s sake.

The Rav did this in truth, and with wholehearted happiness. It was his will that any money given to him would be only kosher money and not unholy money that could awaken unholiness. However, so many of the donors were impressed by the Rav’s powerful humility, that they changed their ways and became his biggest supporters ever.