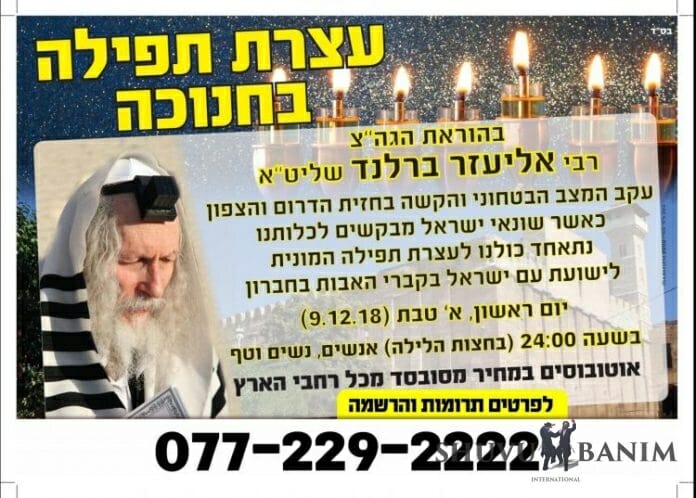 “They are readying thousands upon thousands of rockets, which will reach to Tel Aviv and Jerusalem”

This Sunday night, Zot Chanuka, Rav Eliezer Berland has called for a huge prayer gathering in Hevron, the city of the Patriarchs. The Rav has put out a number of urgent messages in recent days, encouraging people to attend the event, and underlining the importance of participating – because the situation is looking extremely grave.

Here is the full translation of the Rav’s most recent message:

(If you can help to defray some of the expenses of the tens of buses that are being chartered to and from Hevron for Sunday night, please click HERE to donate.)

“The whole of Am Yisrael is currently facing a terrible, threatening situation. Every part of Israel is now under threat of being deluged with rockets. After we saw 400 rockets falling on Ashkelon and the surrounding cities, including Beer Sheva, Netivot, Ofakim and Sderot, now they are preparing thousands and thousands of rockets, which will reach to Tel Aviv and Jerusalem.

“And we have no possibility of stopping this from happening, because the whole world is against us. They can launch 10,000 missiles, and if we fire back even just one, they will say that we are the aggressors, and they are the victims.

“They will say that we began [hostilities], and that they are simply defending themselves.

The State of Israel can’t stop the rockets

“We have no [military] might, we only have the power of tehillim (psalms). All of the State of Israel’s efforts to stop the missiles of Hezbollah and Hamas ended in failure. Every day, we are threatened with thousands of new rockets. They can reach any target precisely…

“Am Israel is in the greatest danger, mamash, and our only possibility of coming through this lies in our mouths: “The voice is the voice of Yaakov, and the hands are the hands of Esav.” (Bereishit, 27:22).

We have reached the final moments

“We are now, mamash, at the final moments that we can stay in Eretz Yisrael, in the State of Israel, because the goal of the Arabs is to destroy everyone here. They don’t care if its dati’im (observant Jews), chilonim (secular Jews), Chareidim, Neturei Karta – they aren’t interested.

“They want to annihilate every single Jew, until the very last one of us – regardless of whether he’s secular, or religious, or Mizrachi (Sephardi traditional), or kipat srugah (National Religious).

It’s written: “And I will divide them, into the light and into the dark” (Bereishit 1:4).

They are not going to distinguish between the ‘light’ and the ‘darkness’. Right now, we are all in the gravest danger, mamash.

So, we need to really urge people to attend this Prayer Gathering, so that almost 50,000 thousand people will come.

Everyone should recite the whole book of Tehillim

“And everyone should read the whole of the Book of Tehillim, which will [form] the shoes for the Shechina, the shoes of Yosef [HaTzaddik], that the brothers quarreled about. Because, never before have we heard of a brother selling his brother for a pair of shoes. The ikker (main point) is that a brother shouldn’t sell out his own brother. (The argument was really over whether they should finish the whole book of Tehillim the whole week, which is the ‘shoes of the Shechinah’.)

“This was the real argument between Yosef and his brothers…and so, every single person is obliged to complete the book of Tehillim at the Prayer Gathering, and to make good use of this opportunity for 50,000 people to say tehillim together.

“This will (be considered in Heaven) as though a billion people are saying tehillim (psalms), and this will certainly stop the tillim (rockets).

Only prayers can stop the rockets

“There is also an obligation to donate to help defray the expenses [of hiring the buses], 1,500 shekels, because hundreds of buses will be needed. And the Rav will of course be coming, without doubt.

“The whole of Am Yisrael is invited to come to the Prayer Gathering, and to finish the book of Tehillim, and this will erase Hamas from the face of the earth.”

Please, do your part to help get the Rav’s message out to as many people as possible, and also come to the prayer gathering yourself, if it’s at all possible.

Buses will be leaving from all across Israel, to get to Hevron by 12am (midnight) on Sunday, December 7th, 2018, immediately after lighting the Chanuka candles.

Buses will be leaving from the following areas:

Please, help us to get the word out anyway you can!