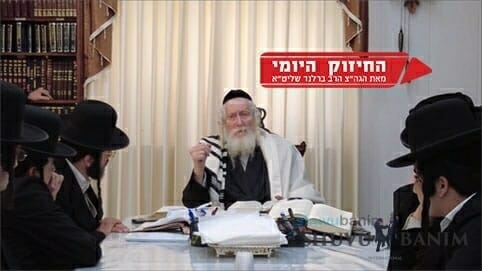 The Daily Chizzuk of our Rebbe, the Gaon and Tzaddik Rav Eliezer Berland shlit”a – “You need to learn Gemara every day.”

Like Rabbi Chanina ben Dosa, that there was an argument between the shepherd and the employer.

The employer said to the shepherd: “Why did you flee?  Why are you fleeing?  Then so what with the lion?  What happened?  Are you afraid of a lion?  What!?

“I’ll pray, I’ll do hitbodedut for you that you’ll have courage!  That you won’t be afraid of lions!”

It’s written about Yaakov Avinu, that a lion came out to devour five sheep, every morning and every evening.

Therefore, Yaakov would learn with them Gemara, and Shas.  He learned with them Kitzot HaChoshen.

One must learn Kitzot HaChoshen every day, also with the sheep.  Anyone who will have sheep should learn with them.