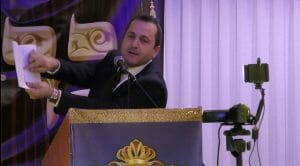 A little while ago, we wrote about Attorney Ephraim Dimri (pictured above), the lawyer who worked with the Rav, shlita, to make a plea bargain.

Attorney Dimri recently attended the Shuvu Banim gathering to celebrate the yahrtzeit of Rebbe Nachman’s main pupil and the redactor of the Likutey Moharan, Rabbi Natan of Breslev, held on motzae Shabbat, January 6th, 2017. As part of the evening’s celebrations, he was invited to say a few words about some of the miracles he experienced while visiting Rav Berland in prison.

As Attorney Dimri himself explained HERE, while he originally met the Rav solely in his capacity as a lawyer, the innumerable open miracles he witnessed subsequently persuaded him to become one of the Rav’s followers.

In his own words, this is what Attorney Dimri had to say about some of the Rav’s open miracles whilst in prison:

Watch the video: (A summary in English follows)

“When I first got here, they told me that I had 10 minutes to tell you a few personal stories about the Rav, shlita. But in all honesty, even if they gave me ten months to speak I still couldn’t tell you everything I experienced. Even if we sit here all evening, it still wouldn’t be enough to give it over, so I don’t know how I’m going to fit it all into 10 minutes.

“Each day, I witnessed such miracles, things that were completely supernatural and beyond human ability. I heard such words of Torah from the Rav, and other things that he said that I’ll share with you a little later on, that he requested that I give over to you here.

“I now refer to the Rav, shlita, as the Mekubal haEloki, (the Heavenly Kabbalist), because I saw him perform big miracles every hour and every day. HaKadosh Baruch Hu gave me the merit of serving the Rav, shlita, and of spending time with him behind bars every day. Hashem also gave me the privilege to learn Torah from him, and it’s impossible to grasp the depth of the Rav’s knowledge.

“He put his finger straight on the citation required without turning any pages, or even browsing the page. It was something completely supernatural.”

“I’m not making things up, and I’m not exaggerating one iota. All my conversations with the Rav, shlita, happen in a location where everything is being filmed and recorded. The Rav said about this week’s parsha, Parsha Vayigash, where is says: “Behold, the kings conferred together” that the strength of the brothers lay in their achdut, or unity. We learn from this that our strength also lies in our achdut.

“The Rav explained that Yosef and Yehudah were sent on a mission by Yaacov Avinu to prepare us for the coming of Moshiach Tzidkanu (our righteous redeemer), as Yaacov said to Yosef: ‘Go and I will send you.’”

“I’m going to tell you some stories that you’re really not going to believe. The Israel Prison Service has now set up a commission of inquiry to find out how prison doors could open without any prison wardens pressing the button… But all these things happened to me, and they’re true.

“I was standing outside in the lawyers’ room, and I was waiting for the prison wardens to open the door, a big iron door, [so I could get in to see the Rav]. Everything there is connected by a closed circuit system, and it’s impossible to open the next door along the passage until the first door is completely closed.

“I said to the Rav [who was waiting for me behind the next door] that the door wasn’t being buzzed open, and that I thought that the prison guard [who was meant to open the door] had gone somewhere. The Rav, shlita, told me: ‘Push!’ so I did, but it didn’t open. So he told me again: ‘Push!’, so I tried again – and this time the door opened. This door literally weighed a ton, but it opened.

“Then the prison warden showed up, and he said to me: ‘How did you get in here?!?’ So I told him that I’d pushed the door open. He went and checked the CCTV, then he called his superior, because he couldn’t understand what had just happened. I said to the Rav: “They’re confused!” He replied: “Let them be confused.”

“Later on, one of the prison officers contacted me, and asked me: ‘Is the Rav normali?’ (sane) I told her: “More than you are!’ So then she asked me: ‘Why then is he sitting on the floor every night and crying his eyes out?’ I told her: ‘He’s reciting the Tikkun Hatzot, (midnight lament), and the Tikkun Rahel and the Tikkun Leah (deep kabbalistic prayers). He’s praying on behalf of all Am Yisrael, and crying for us.’

“This prison officer told me that she’d sent the Rav to be evaluated by a Russian psychologist. She told me: ‘She examined him and told me that his intelligence is off the charts – above what a human brain is meant to be capable of. He knows history, he knows mathematics etc…’

Attorney Dimri continued: “Gentlemen, the Rav is driving them crazy over there! They are putting him through all these tests and evaluations, but ultimately, they are the ones who are being driven crazy by it all!”

“One day, the prison commandant asked me to view some of the footage from the prison CCTV with him. He showed me how the Rav, shlita, is always surrounded by a hila, or aura or light. This is all true! The commandant thought that maybe the CCTV was malfunctioning, because it’s a very advanced piece of equipment, and he couldn’t understand what that aura of light surrounding the Rav really was.

“The prison commandant told me: ‘Do you see that?’ I told him: ‘This is a holy Jew, a Tzaddik who learns Torah and prays all day long. What you’re looking at is his halo, or aura.’ After that, the prison commandant – who happens to be Druze – started coming to the Rav and kissing his hand. The prison wardens are worshiping him there now, this is what the Rav does to people.”

“Another time, I came to visit the Rav, shlita, together with another lawyer, and we decided to start singing with the Rav, because the Rav, shlita, really loves to sing. So we’re singing and dancing together, when the Rav suddenly tells us that we need to come and be his guests [in his prison cell].

“Now, the distance from the lawyers’ room to the Rav’s cell was at least 100 metres, and there are prison wardens everywhere, and CCTV cameras, and everything else. I asked him very politely: ‘How are we meant to get there?’, but I had no doubt that it was completely impossible.

“The Rav took his tallit, put it over our heads, and then took us with him to his cell. We entered his room, and it’s full of holy books, literally piles upon piles of books. The Rav, shlita, looked through a couple of his books, poured us a couple of drinks that we made the bracha over and drank, then told us: ‘Now, I’ve performed the mitzvah of hachnassat orchim (welcoming guests)’.

[Attorney Dimri doesn’t explain how, but it’s clear that the two lawyers have somehow now returned to the lawyers’ room.]

“Suddenly, we see the head of that prison section running towards us, and he’s all stressed-out and shouting at us: ‘Where were you?! I can’t see you on the CCTV!’ We told him that we’d been with the Rav, shlita, in his cell, but he insisted that this was impossible. “I didn’t see you on the CCTV!” he tells us, as the Rav, shlita, is just standing there and smiling at him.

“I told the Rav: ‘Honored Rav, I won’t sit down unless your honored self also sits down!’ So the Rav, shlita, sat down with us, and for the next 45 minutes, he spoke to the angels. There was a Druze prison guard who was watching all this, and his hands didn’t stop shaking from fright the whole time.

“The Rav, shlita, specifically told me the names of the angels, and where they were located. It was one of the most beautiful, spectacular experiences I’ve ever had in my life. The Rav was singing the song ‘Sha’arei Tzion’ for the angels for a full hour. The Rav, shlita, then told me: ‘From this day on, you’ll be my lawyer, and these are the angels that will accompany you.’”

“There are other stories that can only be told once the Rav, shlita, has been freed, bezrat Hashem. If we breathe a word of these stories to soon, the whole of the Israel Prison Service will be up in arms; they’ll have no explanation for how these things occurred. We saw some truly miraculous things there in prison.

Now let’s end with the Sha’arei Tzion song, everyone together…”

Those are some of the words that attorney Ephraim Dimri shared with the crowd.